New staking opportunities in DeFi and centralized exchanges, along with a migration to the Ethereum network are just a few reasons for KDA’s recent 500% rally.

Proof-of-work (POW) blockchain networks were all the rage in the early days of cryptocurrency when Bitcoin (BTC) set the standard for security and other projects followed suit in various attempts to offer a robust, scalable network that would either support payments of efficiently transmit data.

Most protocols have now shifted to proof-of-stake but Kadena (KDA), a scalable layer-one blockchain protocol is still operating on the old proof-of-work model. According to the project, the network is capable of processing up to 480,000 transactions per second thanks to the use of “braided chains”.

Data from Cointelegraph Markets Pro and TradingView shows that  in the last two weeks, KDA price has rallied 1,124% to a new record high at $25.94 on Nov. 7 as its 24-hour trading volume spiked from a daily average of $3 million to more than $345 million. 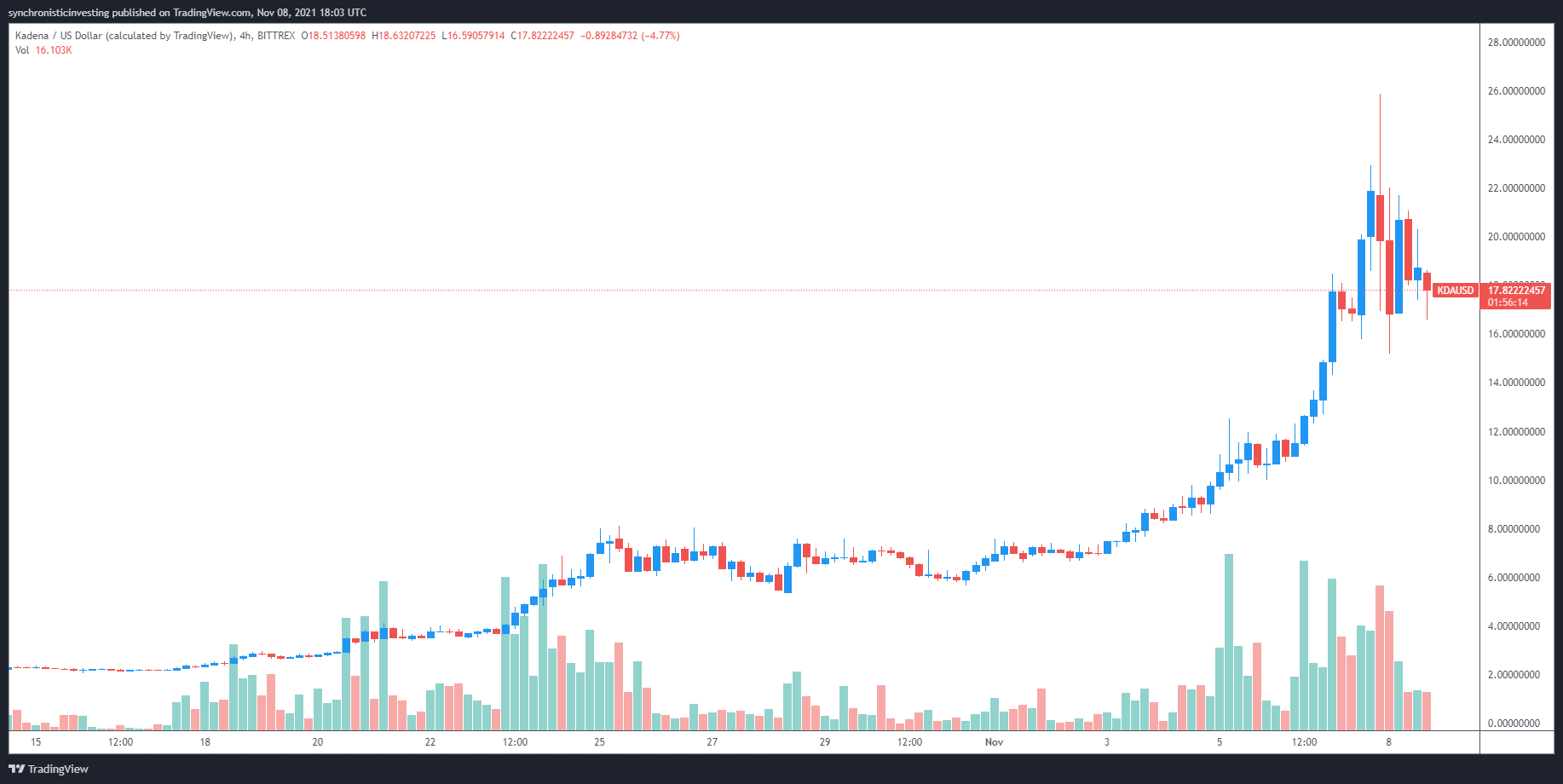 Three reasons for the breakout in KDA price include the launch of wrapped KDA on the Ethereum (ETH) network, the rollout of nonfungible token projects, new exchange listings and the addition of support for KDA staking.

KDA recently launched a wrapped version of its token called wKDA which operates on the Ethereum network and allows it to interact with all EVM-compatible decentralized finance protocols.

The process was completed in conjunction with the CoinMetro exchange and will help to create a new level of token utilization for KDA, which to this point had not been able to cross the bridge into the interoperable world of DeFi.

As noted in the tweet above, the team behind Kadena also plans to add cross-chain support for other blockchain networks like Terra, Polkadot, Celo and Cosmos.

Another reason for the increased momentum seen in KDA was the addition of NFT capabilities to the network as a way to showcase the smart contract ability to transact high demand items while keeping fees low.

.@TheUFOtoken will be building their #NFT gaming platform on @Kadena_io!

NFTs have been one of the hottest sectors in the cryptocurrency ecosystem and also appear to be one of the primary methods for attracting new users to a network so it's not surprising to see yet another project resort to this tactic.

One of the main selling points for Kadena is its ability to offer low-cost transactions in a POW setting while still offering fast processing times.

The project has also introduced a “crypto gas station” feature that allows businesses to eliminate all transaction fees for their customers by creating accounts that exist to fund gas payments on behalf of their users under certain conditions.

KDA has also received support from cryptocurrency exchanges, including a new listing on Crypto.com and CoinMetro offers KDA staking.

This was made possible by @kadena_io's strong and tight-knit community! https://t.co/uzefvikgad

This indicates KDA holders are excited about yield opportunities and it could bode well for its integration into DeFi. wKDA might also contribute to reducing the circulating supply of KDA, which ideally would additional buy pressure on the tokens' price.