It is a monster week ahead for the GBP. Several key economic indicators are due, while Brexit-induced complications affect the movement of goods between Northern Ireland and its neighbours.

The list of economic reports coming from GB is extensive this week. What we are most looking out for are incongruities in the forecast and actual values of:

On the same day that the inflation data is due, the Governor of the Bank of England, Andrew Bailey, speaks regarding the institution’s outlook.

Keeping track of all these indicators will be a nuisance. Further, the forecasted values are not all that promising for GBP bulls.

I am expecting a selloff on GBP this week, so traders can avoid having to fold these variables into their analyses. The GBP significantly strengthened against both the USD and EUR in the lead up to Friday’s closing, although momentum was slowing.  A reversal of this fortune might be inevitable as traders take their profits before any uncertainty enters the market.

Zooming out for a longer-term view. The GBP has been on a tear against the EUR all year. Little patches of resistance did periodically break up the monotony of the EUR bears taking the pair as low as 0.8500. EUR bulls did not provide much pushback until April, taking the pair past the 0.8600 level.

With some lacklustre reports due from the UK over the week, perhaps EUR bulls will have a little more confidence and regain their up-swing momentum from the beginning of April. 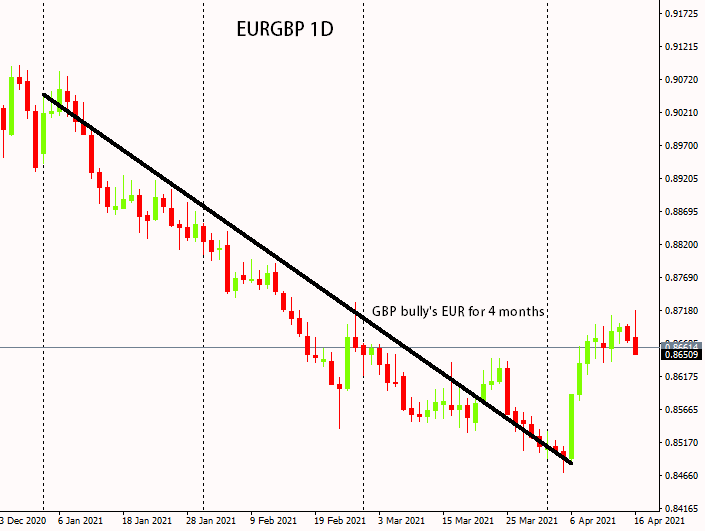