The third quarter of 2021 was bad for gold, with a particularly awful September. Could the remainder of the year be any better for the yellow metal?

September is believed to be, from the historical point of view, one of the best months for gold. Well, September 2021 definitely wasn’t very good for the yellow metal. As the chart below shows, the price of gold declined almost 4% in that month (from $1,814.85 at the end of August to $1,742.80 at the end of September). 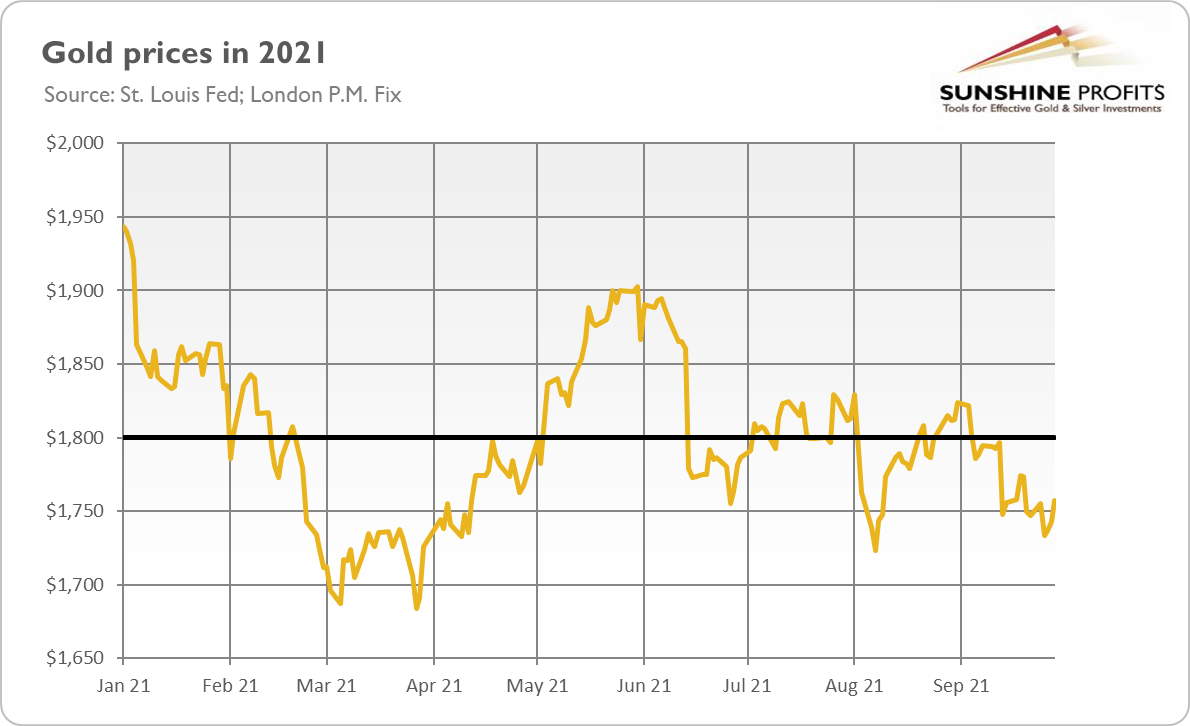 Actually, the whole third quarter was rather disappointing for the yellow metal, which lost 1.15% over the last three months. However, it was still much better than the disastrous first quarter of the year in which gold plunged more than 10%. So far, the yellow metal is 7.67% down year-to-date.

But why did gold perform so poorly last month despite elevated inflation and all the risks present to the US economy? Long story short, rising bond yields and the stronger greenback were the main headwinds for gold in September and, more generally, in the whole Q3 2021, as one can see in the chart below. 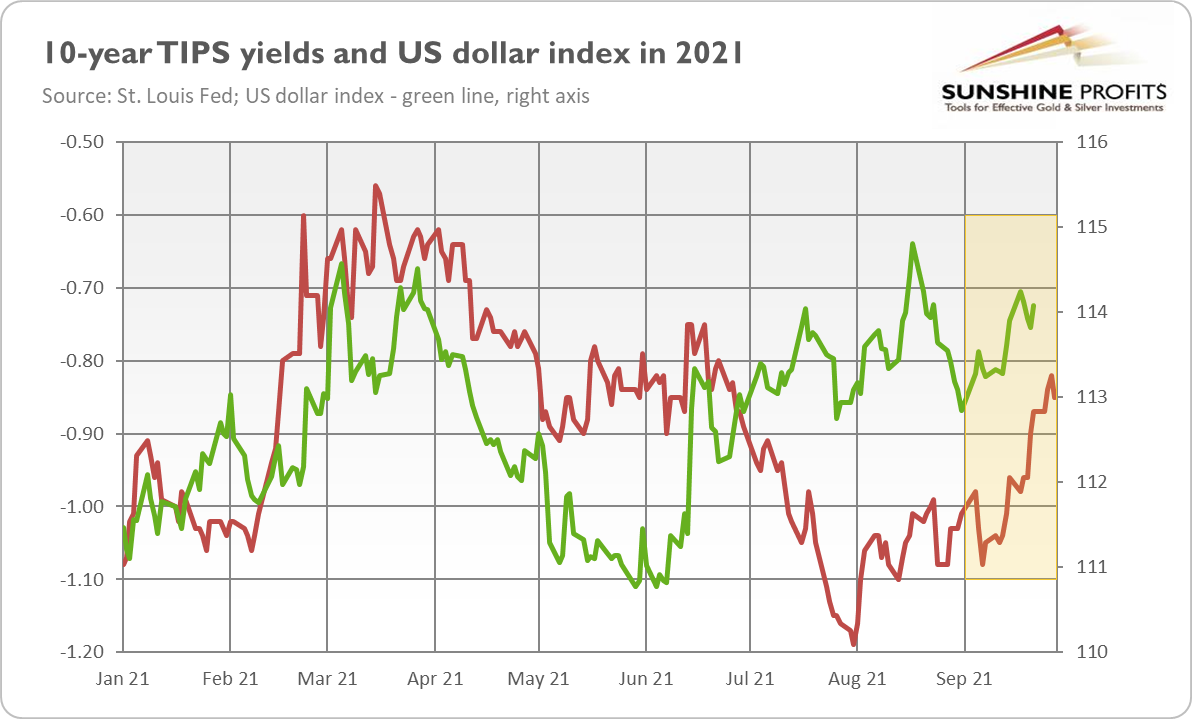 In the first half of the year, the US dollar performed rather poorly, but a more hawkish Fed helped to revive the greenback and push interest rates higher. In such an environment, any safe-haven bets – amid the uncertainty about the debt ceiling, debt problems in China, etc. – were channeled into the US dollar alone. In other words, because of the expectations of the Fed’s tapering, the recent risk-off sentiment has benefited only the greenback, not gold. So, gold’s appeal as a safe-haven asset has diminished recently. The same applies, actually, to gold’s status as an inflation hedge.

To be clear, the whole issue is more nuanced. I believe that gold still has anti-inflationary features, especially when inflation is very high and accelerating. I also think that gold will retain its purchasing power over the long run. It might simply be the case that rising interest rates counterweighed the reasons for investing in gold during inflation, especially given that it seems that the Fed convinced the markets that inflation would only be temporary.

However, if inflation turns out to be more persistent, the Fed could find itself behind the curve, while the real interest rates could stay at very low levels. In such a scenario, the demand for gold as a hedge against inflation could rise again. As a reminder, there are many arguments for high inflation staying with us for longer. Even Powell admitted last week that inflationary pressure would run into next year:

It’s also frustrating to see the bottlenecks and supply chain problems not getting better – in fact at the margins apparently getting a little bit worse (…) We see that continuing into next year probably, and holding up inflation longer than we had thought.

What does it all imply for the gold market? Well, the recent jump in gold prices is quite welcoming. However, it doesn’t change gold’s bearish outlook for the fourth quarter of 2021. Gold has been unable to surpass $1,800, and it looks like it wants to keep falling. In particular, any new hawkish comments from the Fed could push gold prices down even further.

Having said that, I’m more optimistic about gold in 2022. One reason is that, over time, the narrative about transitory inflation will look less and less convincing. Meanwhile, the odds of some inflationary crisis, or stagflation, should be higher and higher.

Second, the Fed’s tightening cycle seems to already be priced in to a large extent. So, the actual moves could start supporting gold at some point, in line with the logic of “sell the rumor, buy the fact”, especially if the moves are accompanied by dovish rhetoric, as it was partially the case during the last tightening cycle of 2015-2019.