The stock market is confounding growing Coronavirus fears by recovering all of the late January's drop in the wake of Coronavirus news out of China that started global alarm bells ringing of what could transpire right across the world. The Dow retraced all of its drop from 29400 to 28200 to Thursday's high of 29408, a new all time high! Clearly where the markets are concerned it's a case of virus? What virus? So discounting the Coronavirus as background noise, unlikely to have any significant economic or market events outside of a few cities in China, are the markets wrong?

That and the Democrats busted flush Impeachment of Trump that clearly did not have a hope in hells chances of succeeding given that the Democrats only managed to convince 1 Republican senator (Mick Romney) to vote for Impeachment, so reduced political uncertainties resolves in market calm before the Coronavirus storm? Find out as I chart the prospects for the Dow's trend over the next couple of months. 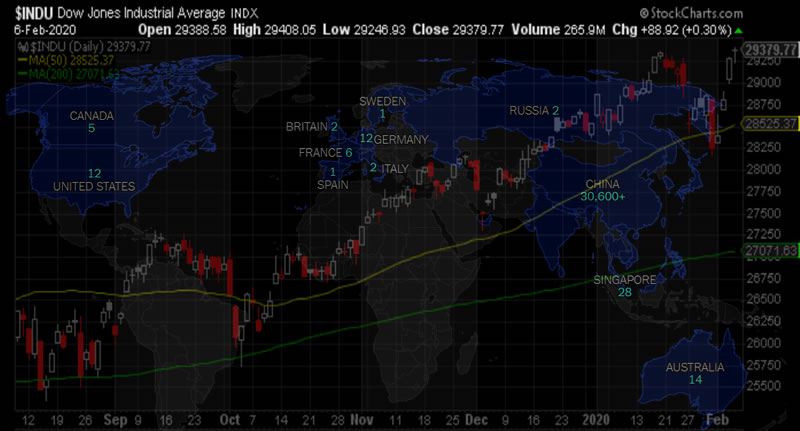 The Coronavirus is more a looming black cloud over the global economy than a black swan event because we all know it's out there in China trying to breakout across the world but so far failing to do so, where in my opinion this is lulling the world including the financial markets into a false sense of security.

Why ? Because China is now passing Day 60 of the outbreak! And as per my trend forecast of 28th January, the pandemic has yet to really start taking off in terms of infections and deaths, where I literally expect it to go parabolic towards the end of February. My analysis of 28th Jan concluded in forecast expectations for the virus to target 1 million infections by the end of February resulting in 35,000 deaths based on the then implied mortality rate of 3.5%. 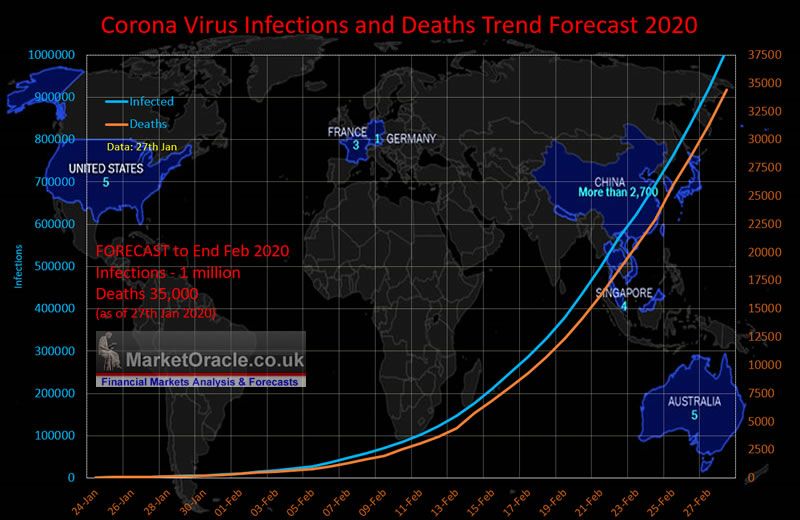 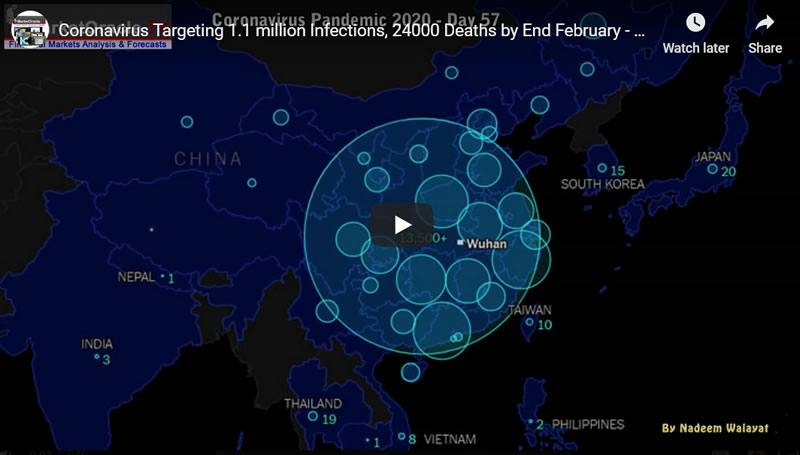 The graph illustrates that the trend trajectory forecast infections to only really start taking off globally mid February when the number of officially declared infections are expected to exceed 100,000 and deaths 2,500. So we are still about a week away from when the Coronavirus pandemic really starts to take off globally, and by the end of February starts to overwhelm healthcare systems which is the real reason why the number of deaths will start to increase.

The forecast for the number of infections and deaths by 6th of Feb 2020 vs actual: 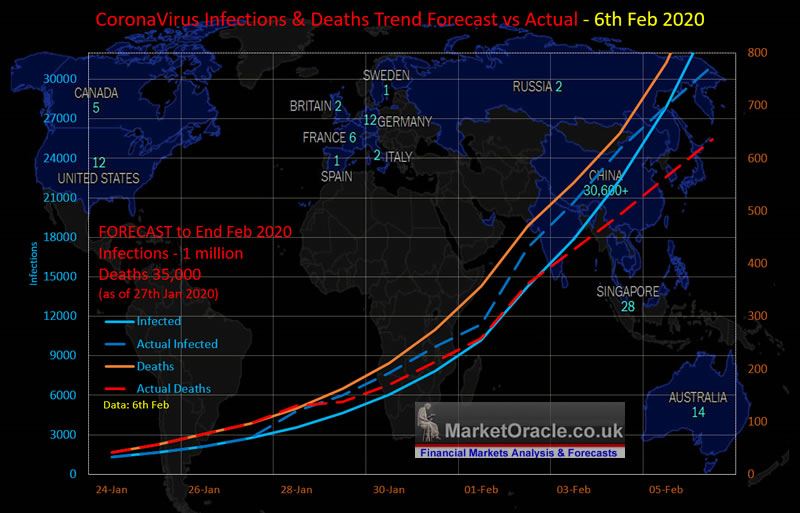 The forecast for the number of infections and deaths by 6th of Feb 2020 vs actual:

Were this trend to continue into the end of February 2020 then the number of infected would total 888,000, whilst the number of deaths would total 18,233. So the latest data implies a wider spread but a lower mortality rate of about 2.1%.

However, there are 2 points to consider, firstly that China is UNDER REPORTING the number of infections and likely deaths. Which means that I still expect the actual pool of infected to pass 1 million by the end of February and thus the risks of a global pandemic remain extremely high.

And that there are large susceptible populations with poor healthcare infrastructure such as India that announced it's first infection a week ago where outbreaks could quickly overwhelm heathcare systems. Also that a vaccine is still a good 4 months away so far too late to have any impact on this pandemic.

Meanwhile this is what China and Asia's infections map currently looks like, which again in my opinion grossly under estimates the number of infected, hence why even the official numbers are increasing exponentially. If I had to guess at a number, I would say that MORE than 200,000 are infected as of today. 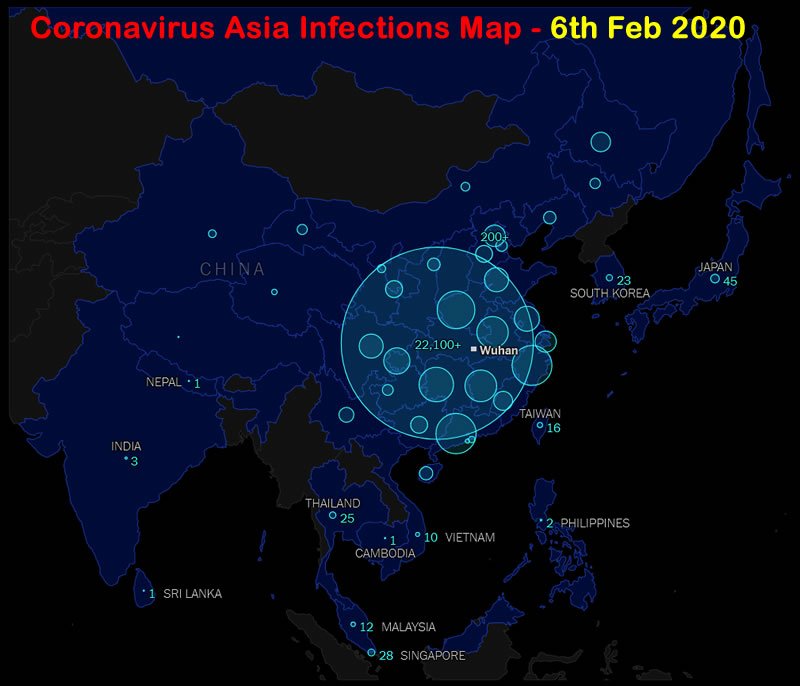 Given the continuing spread of the virus in China and the forecast trend trajectories then the rest of the world is currently still in the calm before the storm stage with likely several outbreaks that risk over whelming healthcare systems as has happened in China. That official figures are under reporting the actual number of infections, for instance as of writing the Diamond Princess cruise ship in Yokohama in Japan has 60 confirmed cases of Coronavirus whilst the total for Japan is still just 45, so likely even for Japan the number of actual cases is double that which is being reported.

And this is what happens to a stock market by Day 60 of a Coronavirus outbreak in response to Chinese central bank pumping over $200 billion into financial system, so don't be fooled by the artificial bounce in stock prices which is due to buying from state run banks.

Whilst the rest of the world is barely scraping past Day 10 in terms of infections, where just as was the case with China are lulled into a false sense of security that a rising emerging super power could easily cope with a new flu strain, albeit a little worse than the usual annual flu bug.

Fast forward 60 days and the Worlds No2 economy is being brought to a virtual shutdown and we have not even reached the peak of this crisis yet for China!

The US is perhaps at day 12 of its outbreak whilst the UK is at day 9. So yet to reach the point where it can be expected to have any significant impact on society and the stock market that will likely come much later, probably not until towards the end of February, so most of the world is still in the calm before the Coronavirus storm stage.

Of course, it is possible that more developed, open and robust western healthcare systems are better able to contain outbreaks by acting sooner than the Chinese who by looks of things sat on their hands for a good month thus allowing the virus go on the rampage whilst local party officials and the police silenced warnings from down below such as from Dr Li Wenliang (now deceased).

Which illustrates the flaw at the heart of the Chinese society where a lack of freedom of speech can result in apocalyptic consequences! 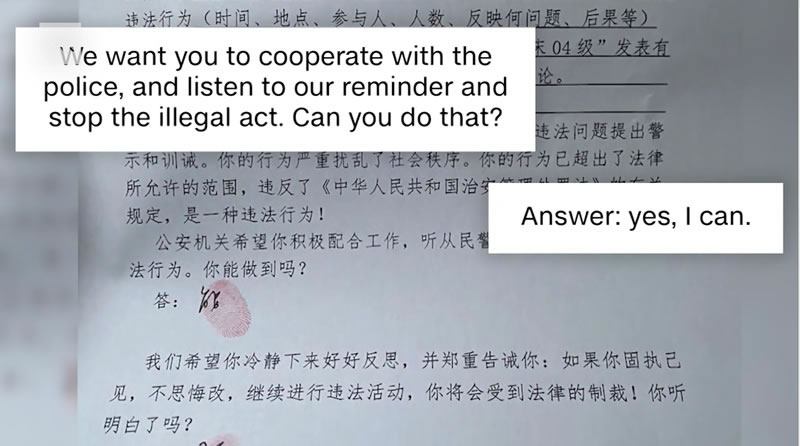 So whilst China can claim to be a rising super power, however the flaws at the heart of it's society ensure that it is doomed to fail in it's quest for world dominance where even something as small as flu bug can bring it to it's very knees!

So if my forecast proves even remotely accurate then by the end of February 1 million will be infected, some 33X today's official number! At which point the virus will not be able to be contained within ANY BORDERS, as outbreaks numbering thousands of infected will be taking place in a number of countries that will play havoc with the worlds economies as the fear of infection drives consumer behaviour to avoid becoming infected as we have increasingly seen in China. Where huge mega cities are turning into ghost towns both as a consequence of frightened citizens and enforced quarantine.

Remember, folks if China is unable to contain the virus then what do you think is going to happen when the virus breaks out in less developed nations with barely functioning healthcare systems.

How long could the pandemic last ? We'll China is at Day 60 and the epidemic is still gaining momentum, so probably another month to run before China finally gets a grip on the virus by which time it will have spread across Asia and threatened the rest of the world. So when China is recovering the rest of the world will start to feel the brunt of their own epidemics.

The Coronavirus IS a global PANDEMIC, which means it IS going to spread to EVERY Nation, there WILL be major outbreaks in the US and UK and the rest of the world. In terms of my forecast then these outbreaks should start manifesting by the end of February, which will likely be accompanied with weakening stock market indices as the outbreaks multiply and supply chains are increasingly hit even for Tech giants such as Apple given that all of it's iphones are made in China.

So the Coronavirus trend trajectory forecasts stocks to enter a weak period before the end of February that looks set to continue into at least the end of March, beyond which it is difficult to say as a vaccine is not expected to materialise until some time in June so global Pandemic fears could rage into early Summer. That's 4 MONTHS OF ECONOMIC WEAKNESS! To imagine that is not going to effect stock prices is wishful thinking as we are witnessing some 31,000 official infections bringing CHINA to a virtual standstill. For instance Britain would experience a similar fate with fewer tham 1000 infections, the US perhaps 10,000. That would be enough to trigger economic contraction that the markets would discount ahead of time, so fall ahead of time.

The bottom line is that we are heading for Coronavirus induced global economic contraction as cross border travel and trade slows sharply from today to at least into the end of March 2020 and likely to the end of April so 2 to 3 months of lower economic growth that the stock markets will discount ahead of time.

The above is a matter of opinion provided for general information purposes only and is not intended as investment advice. Information and analysis above are derived from sources and utilising methods believed to be reliable, but we cannot accept responsibility for any trading losses you may incur as a result of this analysis. Comments within the text should not be construed as specific recommendations to buy or sell securities. Individuals should consult with their personal financial advisors before engaging in any trading activities. We do not in any way warrant or guarantee the success of any action you take in reliance on our forecasts.

EUR/USD retreats below 1.0900 amid risk aversion

EUR/USD has declined below 1.0900 after having spent the first half of the day fluctuating in a tight range near that level. The risk-averse market environment, as reflected by falling US stocks, helps the US Dollar gather strength and weighs on the pair in the American session.

GBP/USD came under modest bearish pressure and declined below 1.2400 in the second half of the day on Monday. The cautious market mood ahead of this week's high-impact events seems to be supporting the US Dollar and capping the pair's upside.