The pound hit a fresh 6-month lows in early trade and is moving to test $1.24, despite a strong labour market report.

There was a lot to like in the report. Whilst unemployment remained steady at the multi-decade low of 3.8%, wages grew at the fastest pace since 2008. Basic pay increased 3.6% in the three months to May, comfortably outpacing inflation at 2% and employment levels hit a record high.

With the jobs market looking so robust, the assumption would usually be that, the more jobs and higher wages would boost spending, supporting economic activity. These are of course not usual times. Data earlier in the month such as service sector pmi and BRC retail figures have indicated that higher wages are not being reflected at the tills, as Brexit uncertainty is keeping consumers from spending.

However, the main source of the pound’s pain this morning is from Brexit and the returning fear of a no deal. The pound slumped to 2019 low’s in reaction to both remaining candidates in the Conservative leadership race, Boris Johnson and Jeremy Hunt opposing the Irish backstop. This dramatically reduces the chances of a no deal Brexit. Both have recently hardened their rhetoric on Brexit. Negotiations will undoubtedly grow more hostile under the next prime minister.

Money markets are pricing in 50% chance of a BoE rate cut before the end of the year. This is owing to the growing risk of the UK crashing out of the EU without a deal. This could be interpreted as the markets now pricing in a 50/50 chance of a no deal Brexit.

Strong US corporate earnings are lifting the dollar. US retail sales could also keep the dollar buoyed. After the surprisingly upbeat US NFP and tick higher in inflation, better than forecast retail sales wouldn’t be entirely surprising.

GBP/USD is down 0.8% its third straight session of losses. The pair is down 1.3% across the week so far. The pair trades firmly below its 50, 100, 200 sma showing signs of strong bearish momentum. 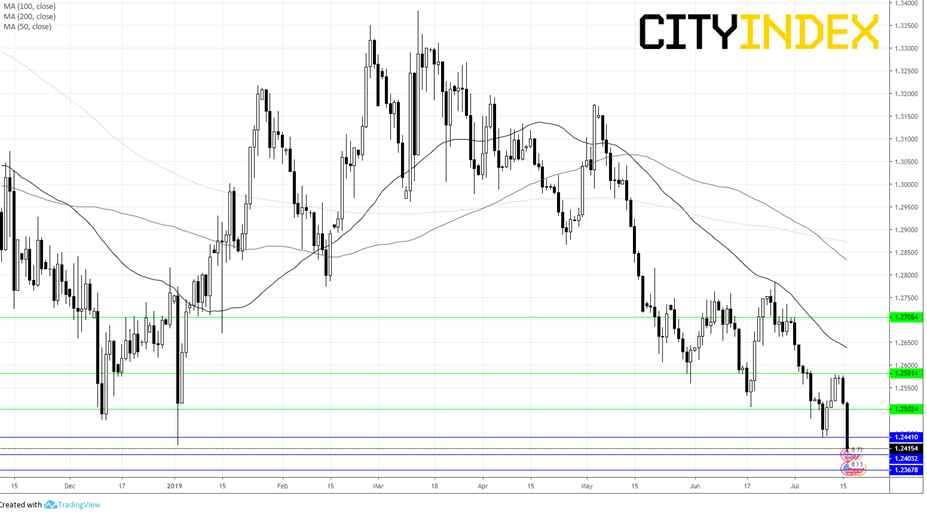