The US Treasury's General Account, more informally known as the Treasury's cash balance, is the bank account the federal government's holds at the Federal Reserve. The federal government, no different than a business or a household, has a daily cash flow as revenues come in and outlays go out. In its role as the government's bank, the Federal Reserve helps facilitate the movement of this money through the financial system.

In mid-March, the cash balance was around $400 billion, in line with where it had been for most of the year. Since then, however, the balance has skyrocketed to a record $1.63 trillion (Figure 1). Why is the Treasury sitting on so much cash at the Federal Reserve, and what are the implications? 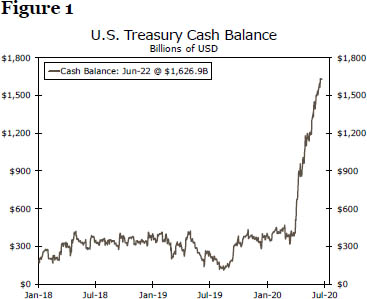 First, some of the growth is the result of increased spending by the federal government. Since mid- 2015, Treasury has aimed to hold a level of cash sufficient to cover one week of outflows in the general account, subject to a minimum balance of roughly $150 billion. As a result of the numerous economic policies adopted since mid-March, Treasury's daily outflows are unsurprisingly much higher now than they were previously. Thus, some of the increase in the cash balance is likely structural and will not be reversed so long as federal spending remains elevated.

But, this phenomenon cannot explain all of the increase. Treasury was well aware of the prospect for higher outlays when it released its quarterly cash balance projections on May 4. These projections showed a cash balance of $800 billion by the end of June; well above pre-COVID levels, but still way below current holdings.

We suspect another key driver of the unexpectedly high cash balance is a slower-than-expected pace of disbursements. The Payroll Protection Program (PPP) is an excellent example of this. The initial round of PPP funding was used up very quickly, but the subsequent replenishment was not fully utilized, such that there is still about $130 billion in untapped funds. Treasury may have raised cash anticipating it would need to disburse that cash for PPP relatively quickly, only to have utilization be lower than expected. Other, similar factors, such as backlogs in state unemployment systems or unused equity in Federal Reserve emergency lending programs, are likely driving a situation in which Treasury raised cash much faster than it needed.

Could the Cash Balance Cause Funding Market Disruptions?

The level of the US Treasury's cash balance may not seem especially pressing given everything else going on in the world at present. But, how much cash the Treasury is holding can have important implications for money markets. When the Treasury experiences inflows from tax payments or debt issuance, this mechanically moves cash out of the private sector (as investors exchange cash for securities or pay their tax bills) and into the government's account. This cash is then no longer available to fund other securities or transactions, such as repurchase agreements.

This is more or less what happened in mid-September 2019, when a corporate tax payment deadline and a period of high debt issuance coincided, causing a major spike in rates on Treasury repurchase agreements. Between September 13 and September 20, the cash balance grew by $100 billion, or 50%, and repo rates spiked significantly (Figure 2). 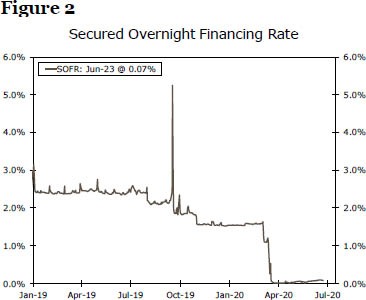 The run up in the cash balance has led some financial market participants to fear that disruptions in funding markets could once again be on the horizon, particularly as quarter-end approaches. We are skeptical of this argument for a few reasons. First, funding markets have weathered the run up in the cash balance well so far. Treasury repo rates have ticked up slightly over the past few months, but they remain comfortably within the target federal funds range of 0.00%-0.25%. We believe this is because, unlike the mid-September period, the Federal Reserve's actions have ensured that the financial system is awash in liquidity. Yes, record Treasury security and corporate debt issuance have occurred, but the Federal Reserve's asset purchases and lending programs have provided ample liquidity to help finance this borrowing. Excess reserves have doubled from mid-March levels, and the ratio of Treasury securities outstanding to bank reserves has fallen significantly from its September peak despite record federal debt issuance (Figures 3 & 4). On the lending side, the Fed offers $500 billion in overnight repo operations, a series of term repo operations, as well as numerous other liquidity programs such as the Primary Dealer Credit Facility (PDCF).

Additionally, we doubt the cash balance will go much higher from current levels, though of course the path forward will depend on a host of factors that are difficult to know, such as the economy's performance or potential new fiscal stimulus bills. But if our baseline forecast unfolds as expected, at some point Treasury can begin to slow or even halt its net issuance of Treasury securities, instead meeting its financing need by slowly winding down its cash holdings. On May 4 Treasury projected $677 billion in net borrowing for Q3-2020, so it is possible that much of this may end up being met by cash balance reductions. The release of this cash, paired with a more modest pace of debt issuance and Federal Reserve actions, should keep money markets operating smoothly.