As the dollar recedes on some scepticism around the aggressive bets of an early Fed tightening, US inflation and retail sales numbers due in the coming week could reignite those expectations. There could be a further boost to the global recovery outlook if Chinese GDP figures point to strong growth in the first quarter. In the UK, the monthly GDP print might not be able to provide much respite for the sagging pound and the kiwi might have a hard time too if the Reserve Bank of New Zealand indicates a full recovery is a long way off. The Aussie on the other hand will be looking to stretch its tepid rebound should Australian employment continue to rise.

Markets seem to finally be heeding the Federal Reserve’s message that it’s too soon to be talking about policy tightening, prompting a bit of a pullback in Treasury yields, particularly at the short end of the curve. This has been weighing on the US dollar, though, quarter-end rebalancing by portfolio managers could also have contributed to relieving the selloff in Treasury notes, which means it probably won’t take much to reverse these moves.

The United States is poised for some stellar releases in the next seven days, starting with the consumer price index (CPI) on Tuesday. The headline CPI rate is forecast to have jumped from 1.7% to 2.4% year-on-year in March, which would make it the highest since January 2020. On Thursday, the Empire State and Philly Fed manufacturing gauges might take some of the steam away as they are anticipated to moderate in April. But the retail sales report should quickly undo any disappointment as consumption is projected to have bounced back in March. Analysts are forecasting a gain of 4.7% month-on-month. 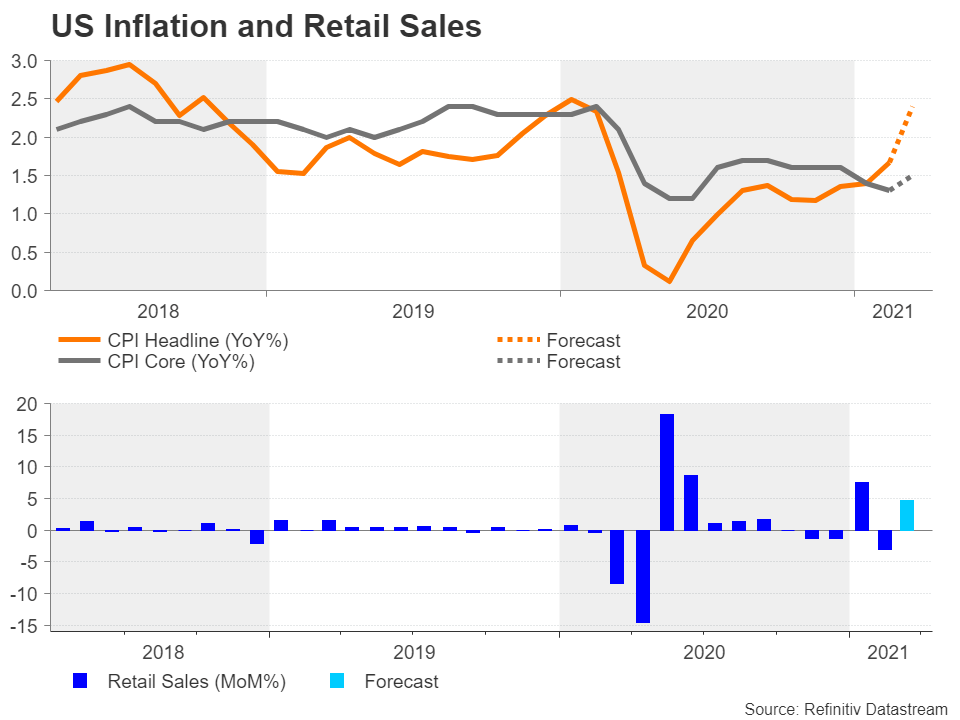 Industrial output figures are also due on Thursday, while more robust data is expected on Friday from the readings on building permits, housing starts and the University of Michigan’s preliminary consumer sentiment survey.

Should the upcoming numbers underscore the view that the US recovery is fast gathering pace, Treasury yields could head north again, bolstering dollar bulls.

China is the first major economy to have fully recouped the lost output from the pandemic slump and annual growth is expected to have exploded higher in the first quarter due to last year’s low base effect. This distortion could push China’s growth rate to the double digits for the first time in a decade. The GDP report, due on Friday, will be accompanied by industrial output and retail sales figures, which are expected to have maintained double-digit growth in March. Trade data for the same month is also out next week, scheduled for Tuesday, with exports forecast to have surged by 32.7% y/y. 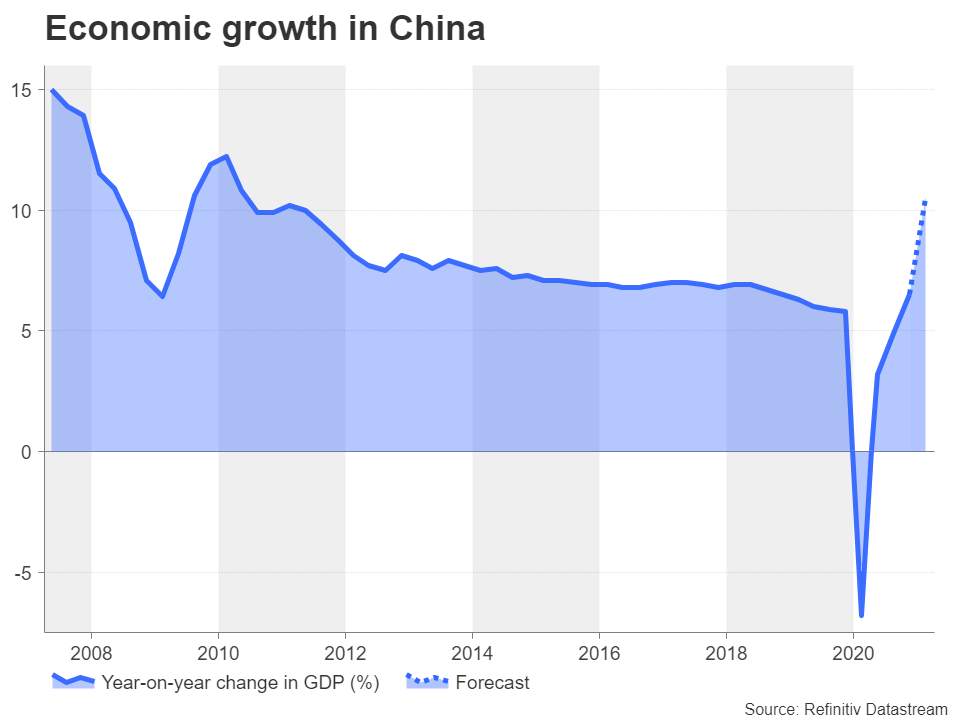 Market sentiment is likely to receive a notable boost if China’s growth indicators are as strong as being predicted as they would further embolden the brightening picture for the world’s second-largest economy. This would also be good news for the China-sensitive Australian dollar.

The Aussie has managed to come off recent 3-month lows but its rebound has been lackluster. However, this could change if turbo-charged growth in China is not only confirmed but is complemented by a further improvement in Australia’s labour market. Australian employment numbers are released on Thursday and are expected to show an increase of 35k jobs.

RBNZ has an excuse it needs to stay dovish

Across the Tasman Sea, the RBNZ meeting on Wednesday will be the main highlight for the New Zealand dollar, though the NZIER business confidence survey and electronic card retail sales figures on Tuesday will probably attract some attention too. Recent data out of New Zealand have been rather weak. GDP unexpectedly contracted in the fourth quarter and business sentiment and consumer spending appear to have deteriorated so far in 2021, signalling a possible double-dip recession.

If the NZIER business confidence index falls in the first quarter and electronic card retail sales decline again in March, the RBNZ would have good reason to maintain a dovish tone in its policy statement on Wednesday. It wasn’t so long ago that investors were rushing to price out a cut in the cash rate to below zero – fuelling the kiwi’s uptrend – as the initial economic rebound was far swifter than anticipated. But the currency took a pummelling last month from falling yields as well as from the government’s decision to curb booming house prices, which alleviated the need for the central bank to take action of its own, such as raise the cash rate. 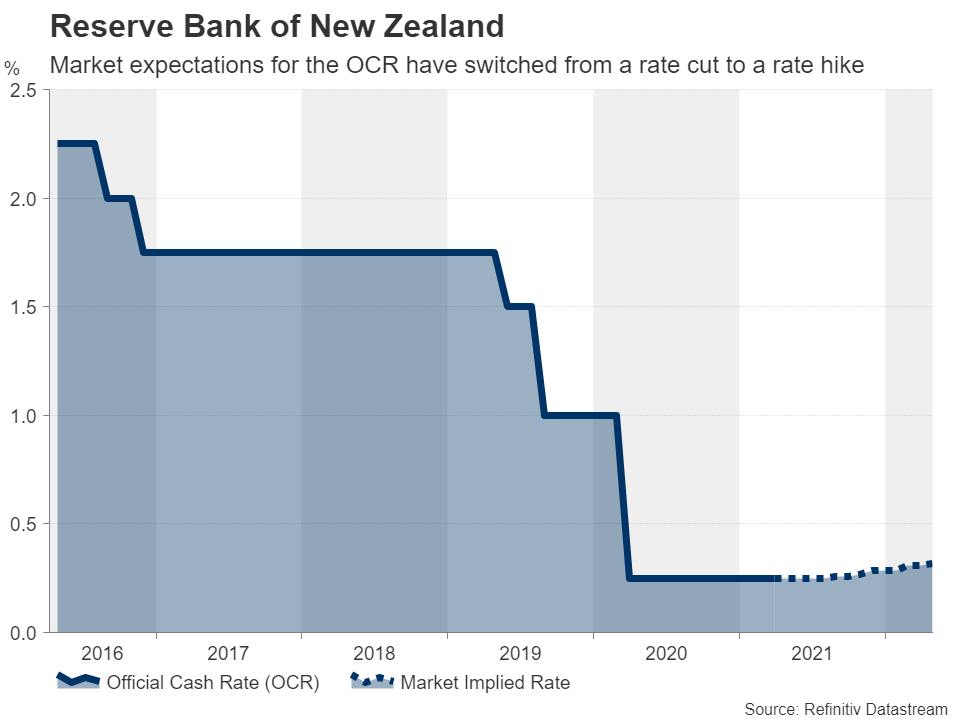 Thus, the RBNZ is now in a position to make a more convincing case for keeping rates lower for longer and this could hurt the kiwi until policymakers can be more certain that New Zealand’s recovery is getting back on track.

Another currency that’s been somewhat on the backfoot lately is the British pound. Fears that safety concerns about the AstraZeneca jab could hamper the UK’s successful vaccine rollout have taken the wind out of sterling’s rally. The currency had already been facing downward pressure from a resurgent dollar and the risk of a slowdown in the vaccination programme has taken a further shine off cable. If Britain is unable to find alternative supplies to the AstraZeneca shot, businesses’ plans for a summer reopening might come under threat.

Next week’s key numbers for February are unlikely to do the pound any favours either, especially after the encouraging and more up-to-date PMI prints for March were unable to significantly allay the vaccine jitters. Tuesday will see the release of the monthly readings on GDP, industrial output and the trade balance. After shrinking almost 3% in January, GDP probably ticked up in February, but only slightly as the UK was still in a hard lockdown during the period. 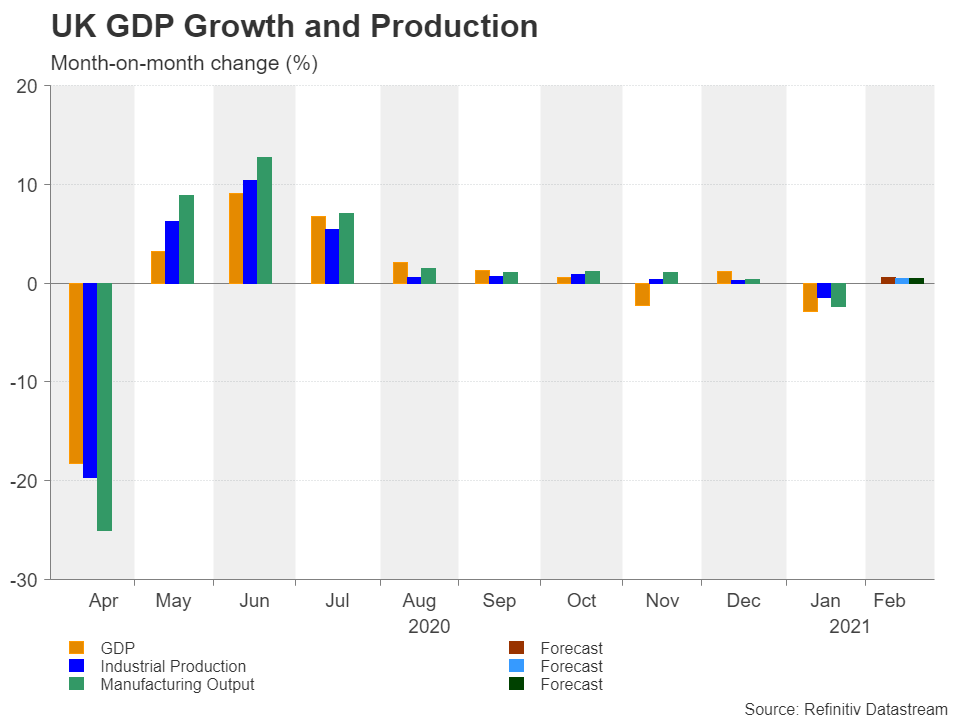 Staying in the region, it’s looking like a relatively muted week for the euro, with very few top-tier items on the European agenda. Eurozone retail sales will commence things on Monday, followed by Germany’s ZEW economic sentiment index on Tuesday. Industrial production data is out on Wednesday and the final estimate of March CPI will round up the week on Friday.

The euro has been edging higher in April, climbing off the 5-month trough of $1.1702 to nearer the $1.19 level. A late response to the surprisingly upbeat March PMIs could be one reason for this bump-up. Signs that the EU’s vaccination pace is gaining traction could be another. However, short-covering is being cited as the main factor behind euro/dollar’s unusual strength, suggesting investors remain downbeat about the Eurozone’s recovery prospects. Hence, it’s probably premature to begin talk of a meaningful rebound in the pair.