Central bank meetings will be front and centre next week as the Federal Reserve, Bank of England and Bank of Japan convene for their policy decisions. The Fed will likely grab the most attention amid intensifying expectations of a rate cut. In terms of data releases, the main focus will be on inflation as Canada, the Eurozone, Japan and the United Kingdom report for the month of May. Flash PMIs out of the Eurozone will be important too, so will Q1 GDP figures from New Zealand.

Fed could flag a rate cut

The Fed will be the first of the three central banks to make its policy announcement next week and is expected to keep the fed funds rate unchanged at the target range of 2.25-2.50%. But with markets convinced that a rate cut at the following meeting in July is a foregone conclusion, traders could be disappointed if the Fed falls short of giving outright signals of lower borrowing costs.

The Fed will publish updated economic projections on Wednesday, but with most FOMC members having so far only gone as far as suggesting they are open to rate cuts, it will be fascinating to see how many committee members will predict a rate cut in their projections. In the previous projections, the Fed had sharply lowered its median forecasts for interest rates but was still anticipating some tightening over the next couple of years.

It’s more than possible therefore that the median projection in June will be for only a modest cut in rates, which would risk triggering a major upside correction for the bearish looking dollar. Worse, it could cause a major market upset, sending stocks spiralling downwards. Thus, Fed chief Jerome Powell will have a tough challenge in sounding dovish enough to please the markets without promising as many cuts as investors are pricing currently. 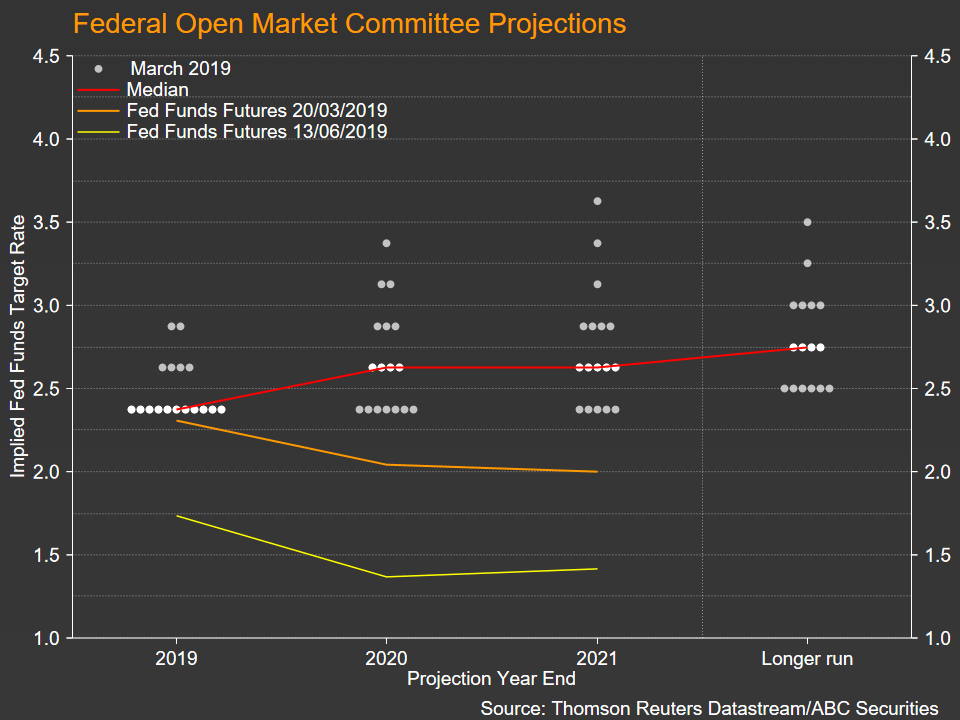 With the Fed meeting grabbing all the limelight next week, US releases will probably struggle for attention. Manufacturing activity gauges for June will come into focus over the next few days. The Empire State manufacturing index is due on Monday, with the Philly Fed manufacturing index coming up next on Thursday and the IHS Markit flash manufacturing PMI on Friday. Housing data will also be plenty. Building permits and housing starts are out on Tuesday, followed by existing home sales on Friday.

The Bank of Japan will announce its policy decision a few hours after the Fed on Thursday. Unlike in the United States where interest rates are comfortably above 0%, the BoJ has limited room to cut even though it may need to as Japanese exports have taken a big hit from Trump’s trade war and inflation is still nowhere near the 2% target.

Investors will be able to gauge how exports and inflation performed in May on Wednesday and Friday, respectively. However, even if the data surprises and shows some easing in the annual decline in exports and core CPI, which strengthened to 0.9% y/y in April, rises further, they’re unlikely to be significant enough to alter the BoJ’s view that the risks to both growth and inflation remain skewed to the downside. 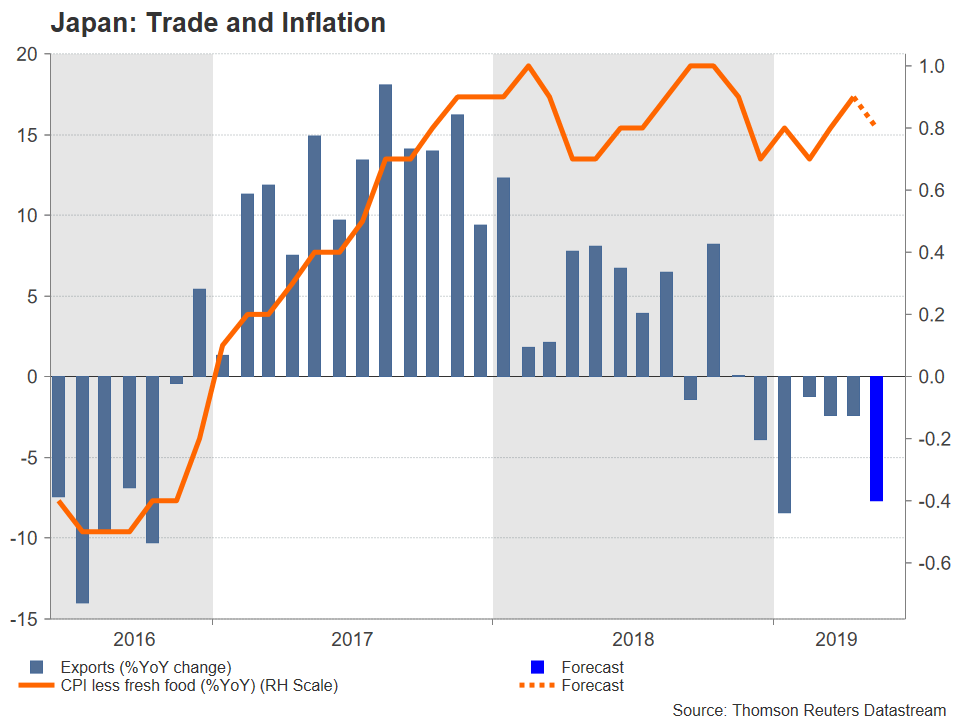 But while the BoJ will probably stress the negative risks to the economy in its statement and reiterate its willingness to expand its stimulus program if required, policymakers are unlikely to take any action next week nor commit to any changes in policy in the near future. BoJ Governor Haruhiko Kuroda recently signalled the policy rate could be cut below the current -0.1% but didn’t see the need to do so just yet.

The absence of fresh policy direction by the BoJ can only mean the yen will continue to be driven by market sentiment and unless there’s any positive developments on the trade front, the safe-haven currency is expected to stay in strong demand over the coming weeks.

The Reserve Bank of New Zealand was the first of the major central banks to cut interest rates, lowering its cash rate by 0.25% in May. However, all the indications are that the RBNZ is not in a hurry to ease again, and with rate cut expectations for the Fed surging in recent week, the local dollar appreciated against its US counterpart before coming under pressure in the past week from the dip in risk appetite.

Next week’s GDP estimates for the first quarter, due on Thursday, will be watched closely as any unexpected weakness in economic growth would fuel speculation that the RBNZ will deliver another cut before the year-end.

It’s been a similar story for the Australian dollar, which saw limited downside from an RBA rate cut due to a weaker US dollar before being weighed down from the latest bout of risk aversion. However, investors are a little more certain of additional rate cuts from the Reserve Bank of Australia and will therefore be scrutinizing the Bank’s June meeting minutes on Tuesday for more clues.

The Canadian dollar finally managed to halt its year-to-date slide against the greenback in June as US data disappointed, while Canadian indicators fared much better in comparison. Next week’s releases could further help shift sentiment for the loonie as May inflation figures are due on Wednesday and April retail sales follow on Friday.

With investors pricing about a 70% probability of a Bank of Canada rate cut by December, the loonie could stretch its rebound versus the dollar if the numbers are strong enough to cast doubt on BoC rate cut prospects.

Bank of England only hawk in the room

The Bank of England will be the last of the central bank meetings next week, announcing its policy decision on Thursday after the BoJ and the Norges Bank. But ahead of that, UK data will draw traders’ attention amid growing concerns that the British economy is finally starting to feel some real pain from the chaos and uncertainty inflicted by Brexit.

UK inflation numbers are out on Thursday and are expected to show the headline rate nudging down to 2.0% year-on-year in May. Retail sales will follow on Thursday and will be very important given that domestic consumption is the main driver of UK growth. Retail sales were flat in April and the absence of a pickup in May would not send out very positive signals about the UK economy. 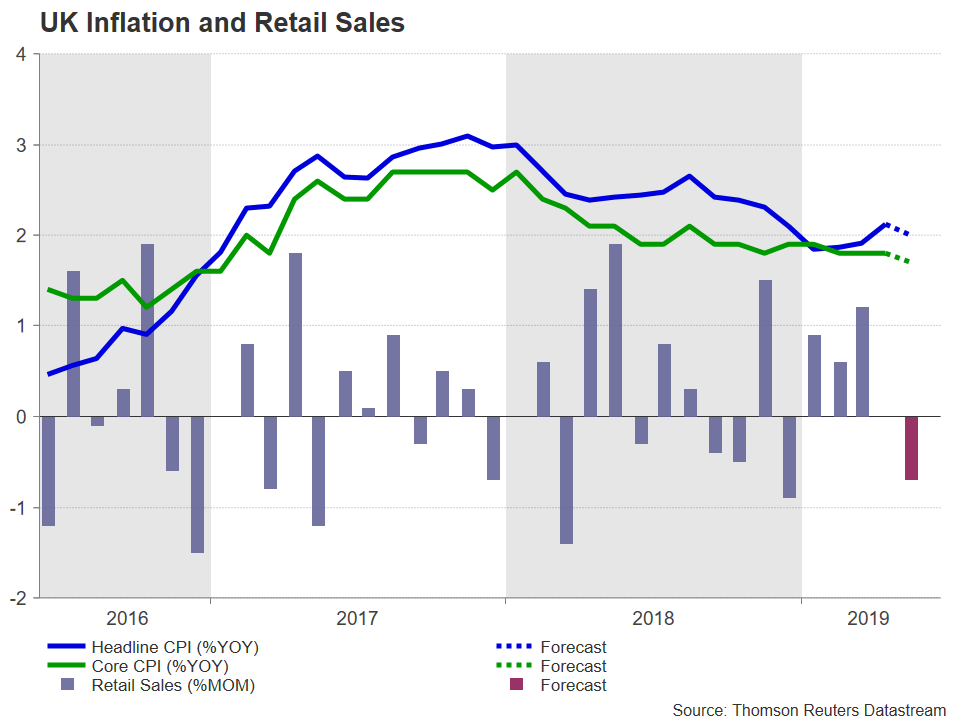 Despite the growth worries, however, and the rising risks of a no-deal Brexit, the BoE is sticking to its central projection that some tightening in monetary policy will be needed over the next 2-3 years. With no press conference or quarterly forecasts scheduled for the June meeting, the BoE is widely anticipated to repeat the same message in its statement.

Markets aren’t convinced by this hawkish talk, however, and so the impact on the pound of the BoE being the only major central bank that’s outright flagging a rate increase hasn’t been too significant.

Eurozone PMIs to steady in June

As the European Central Bank keeps its options open for a possible loosening in monetary policy, the flash Eurozone PMIs for June will come under the radar on Friday. Before that though, the final reading of May CPI is out on Tuesday, along with Germany’s ZEW economic sentiment index for June.

As trade frictions stay elevated, morale among Germany’s export-heavy businesses is taking a knock and the ZEW economic sentiment index is predicted to decline to -5.0 in June from -2.1 previously. 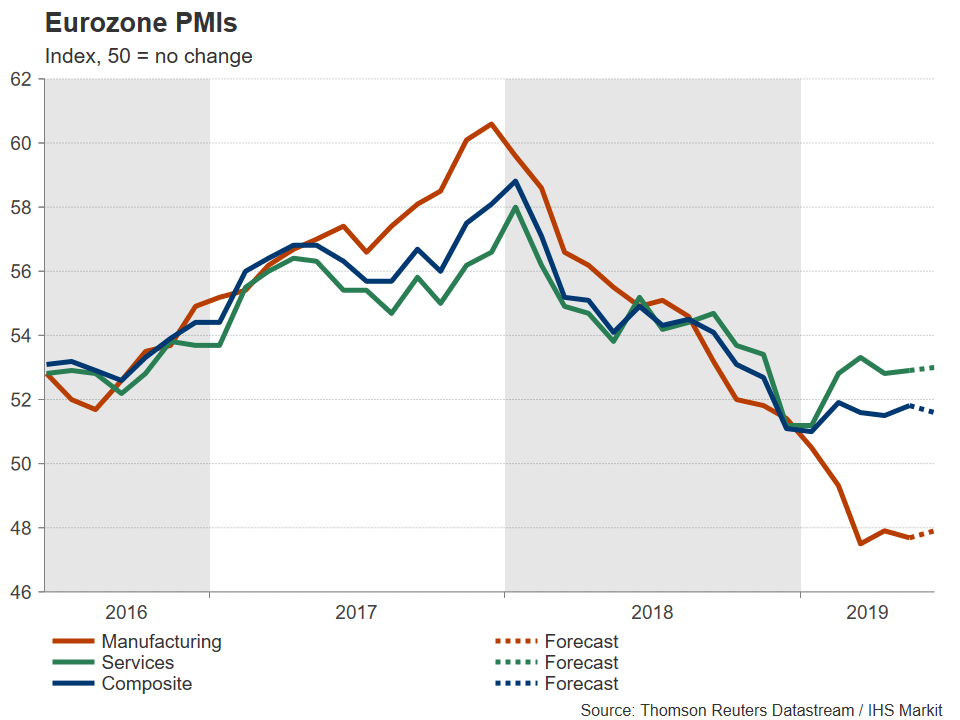 IHS Markit’s PMIs paint a somewhat steadier picture, however, with the euro area’s composite PMI hovering in the 51.5-52.0 region in recent months. The flash PMI prints for June are forecast to show a small improvement in both manufacturing and services activity.

The euro is likely to be sensitive to any big surprises in the PMI numbers as the ECB ponders what its next move should be.