The summer lull will continue into next week as economic releases will remain sparse. However, central bank minutes and the annual gathering of central bankers at the Jackson Hole Economic Symposium should generate plenty of headlines ahead of expected policy easings in September. Trade and geopolitical tensions will also come to the fore as world leaders attend a G7 summit in France.

Aussie and kiwi to remain on the backfoot

The Australian and New Zealand dollars have managed to steady somewhat this week despite the increased risk aversion. But with interest rates in both countries set to fall further in the Autumn, the aussie and the kiwi are not expected to escape the bearish rout just yet.

The minutes of the Reserve Bank of Australia’s August policy meeting, due on Tuesday, will likely reinforce the view that additional rate cuts will probably be needed to support the economy. Over in New Zealand, producer prices and retail sales numbers for the second quarter will attract interest on Monday and Friday, respectively, as investors look for clues on how quickly the Reserve Bank of New Zealand will follow up this month’s surprise 0.50% rate cut with another reduction.

After last week’s unexpectedly strong GDP figure for the second quarter, Japanese indicators on trade, inflation and manufacturing will be watched for signs on whether the economy’s resilience has extended into the third quarter.

July trade numbers out on Monday are expected to show exports declining by a further 2.2% on an annual basis. The flash manufacturing PMI for August will follow on Thursday and the consumer price index (CPI) for July will round up the week on Friday. The core CPI rate, which the Bank of Japan targets for its inflation goal, dropped to a 2-year low of 0.6% year-on-year in June, strengthening the argument for more stimulus. It’s expected to have stayed unchanged in July. However, the BoJ has so far avoided joining its global peers in committing to additional easing as policymakers would likely want to hold on to their limited ammunition for a much bigger emergency. 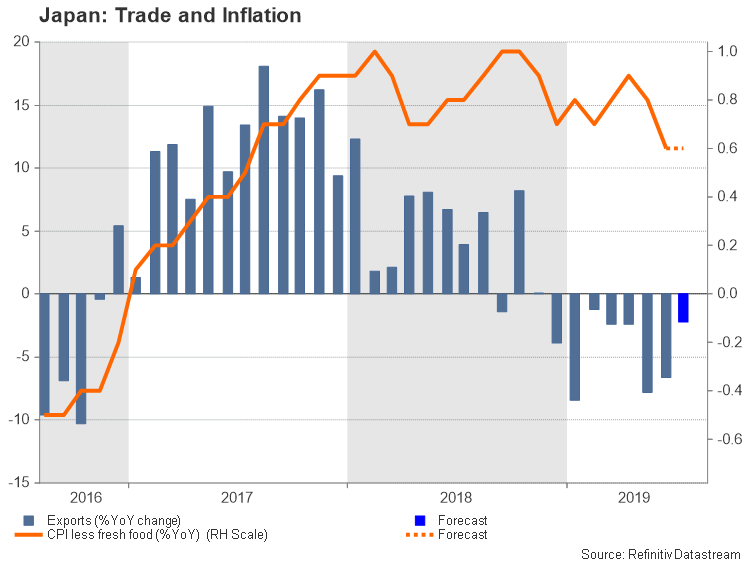 But the BoJ may not be able to sit on the sidelines for much longer if the yen continues to appreciate to uncomfortable levels. The yen has soared to multi-year highs against its main rivals such as the euro, pound and aussie, and without a sharp de-escalation in trade tensions the exchange rate could prove a major source of headache for policymakers in the coming months.

Flash PMIs and ECB minutes to be European highlights

It will be relatively quiet in Europe next week, with no top tier data from the United Kingdom and only a handful of releases out of the Eurozone. The final print of Eurozone CPI for August is due on Monday but most of the attention will be on the account of the European Central Bank’s July policy meeting and the preliminary PMIs for August on Thursday.

At its July meeting, the ECB had strongly signalled that more stimulus is on the way so some form of policy easing in September has already been largely priced in by the markets. But some market participants are doubtful as to how far the Bank will go and the euro stands to gain if the minutes suggest there could be opposition to a sizable stimulus package.

On the other hand, flash PMI readings for July are expected to show the Eurozone economy is stuck in the doldrums and is in urgent need of more stimulus. The IHS Markit report is anticipated to show growth in Eurozone economic activity moderating further in August, with the composite PMI forecast to have fallen 0.3 points to 51.2. 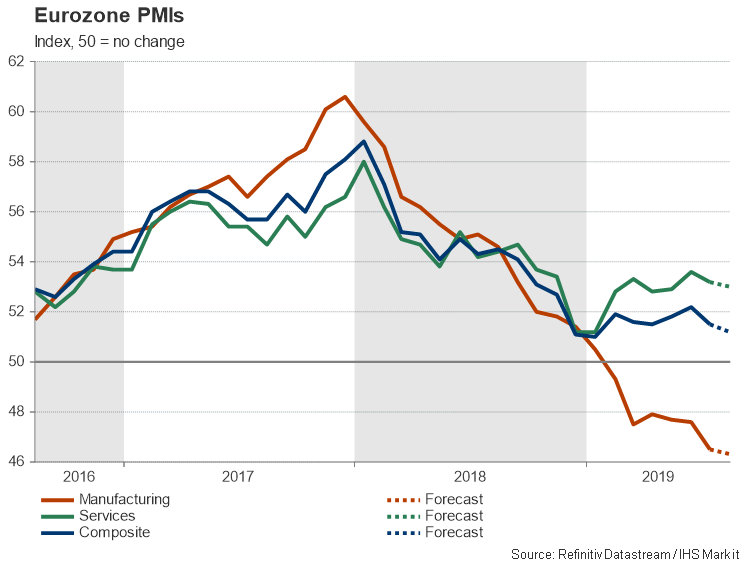 But given the key risk events coming up later in the month and in September, as well as the summer holiday season, many traders are likely to stay away and reaction in the euro will probably be limited. The main political risk for the euro is the possibility of fresh elections in Italy where the prime minister is expected to face a no-confidence vote on August 20.

The pound is facing some sideways movement too as British MPs won’t return from their summer recess until the first week of September and an agreed meeting between the UK and Irish prime ministers to discuss the Brexit backstop is unlikely to take place before September, keeping the British currency hanging by a thread.

Expectations for a year-end rate cut by the Bank of Canada have been steadily rising since May even though domestic indicators have been mostly positive. However, last week’s unexpected drop in July employment did cast some uncertainty over Canada’s growth outlook under the cloud of escalating trade frictions. Investors will therefore be watching next week’s July inflation numbers on Wednesday and June retail sales figures on Friday for a better gauge on the strength of the economy. Manufacturing sales on Tuesday will also be important.

If the data are upbeat, they could help the Canadian dollar recoup some of the past week’s losses versus the US dollar.

There will only be a few notable releases on the US calendar, consisting of existing home sales on Wednesday, IHS Markit’s flash PMIs on Thursday and new homes sales on Friday. Instead, the focal point will be the Federal Reserve and the path of monetary policy in the United States as the FOMC minutes are due to be published on Wednesday and Fed Chairman Jerome Powell is expected to speak on the second day of the Jackson Hole conference on August 23. Coincidentally, as interest rates around the world head towards negative territory, the theme of this year’s symposium is “Challenges for Monetary Policy”.

But before attention turns to Jackson Hole in Wyoming, the minutes of the July policy meeting will be scrutinized as investors will be hoping they might shed more light on the views of the two dissenting members that voted against a cut in July. However, any gains by the dollar from not-so-dovish minutes could be reversed by Fed speakers at the Jackson Hole gathering. In particular, traders will be hoping to get more clarity from Powell following his much-criticized press conference from the July meeting.

If Powell and other FOMC members suggest the worsening US-China trade row may warrant a deeper rate-cutting cycle than hinted at the July meeting, the greenback is likely to come under fresh attack.

Just as the Fed’s economic symposium comes to an end on August 24, the leaders of the world’s seven largest industrialized nations will meet in France for the 2019 G7 summit. With US-China trade tensions running high and given the recent flare-up in the Middle East with Iran, it’s unclear whether the summit will produce any thaw in relations between the key nations. But should any progress be made, gold could be the first to suffer a steep sell-off from any ebbing in global frictions.