Last Thursday’s signals were not triggered, as the price action when the support level at 111.46 was reached was insufficiently bullish.

Trades must be taken between 8am New York time Monday and 5pm Tokyo time Tuesday.

I wrote last Thursday that bears really needed to see a break below 111.46. I was prepared that day to take a bullish bias if the price could trade above 112.10 for a couple of hours, but it did not happen. Overall this was a good call as once 111.46 broke down, bears were able to push the price down further, although the downwards move seems to have ended by now. It looks clear that the former support level at 111.46 is now likely to flip over to act as new resistance.

Both currencies here are quite strong as there is more of a “risk off” sentiment in the market now, with the Yen tending to benefit most from that, as usual. The more stocks continue to sell off, the more this currency pair is likely to move down.

Today I expect that both the nearby support and resistance levels are likely to hold. The most probably opportunity would probably arrive as a bearish rejection of the resistance at 111.46 after the New York open – if that sets up, I would take a bearish bias at that point. 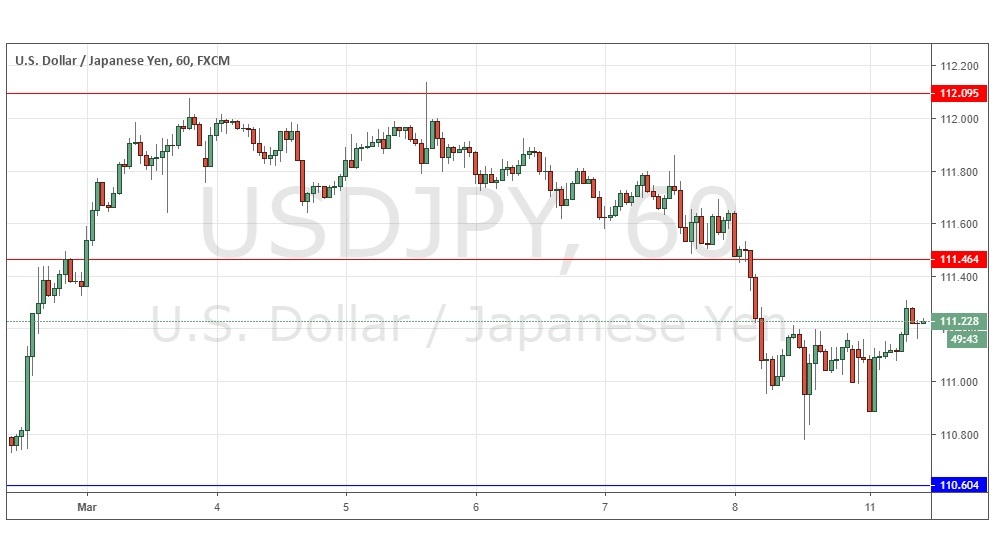 There is nothing of high importance due today concerning the JPY. Regarding the USD, there will be a release of Retail Sales data at 1:30pm London time followed at 1:00am by a minor speech from the Chair of the Federal Reserve.