We forecast USD/JPY at 105 in three months. Here are three reasons why: (1) Japan’s GPIF probably will not pour money into overseas bonds when $/JPY is above 110, (2) the rally to 112 was largely down to USD funding strains, which should reverse into April, and (3) Japan’s large current account surplus will see JPY favoured in a recession.

Whenever USD/JPY rallies, the FX market can normally dig up a story that Japan’s Government Pension Investment Fund (GPIF) is behind it. Recall the GPIF is one of the world’s largest fund managers with JPY168trn ($1.5trn) of assets under management and has quite an aggressive weighting towards overseas assets.

Markets have been speculating on a change in the GPIF’s portfolio weights for the last six months and these may be announced March 31st, ahead of the new fiscal year. Press reports widely suggest that equity allocations will remain unchanged, 25% each to both domestic and foreign equities. The big story, however, is the changes to its bond market weightings. Domestic bond weightings are expected to be cut to 25% (from 35%) and foreign bonds increased to 25% (15%).

We assume that the divergence from benchmark weights will stay the same, namely: domestic bonds +/- 10%, domestic equities +/- 9%, foreign equities +/- 8% and foreign bonds +/- 4%. The GPIF stopped publishing its asset market allocations last autumn, thus the last insights we have on its positioning are as of June 2019. On the assumption that the GPIF shifts to the weights above and goes overweight foreign bonds and underweight domestic bonds as much as possible, that could lead to a JPY18.5trn ($168bn) outflow from the JPY. Please see the chart below for the projected changes.

The above calculation looks at the projected changes from June 2019 to June 2020, assuming the GPIF moves to the full, overweight foreign bond allocation. The problem is knowing where we are right now? Has much of the allocation taken place already? Some indication of this may come through monthly statistics on international securities flows from Japan’s Ministry of Finance. These show a sharp pick up in foreign bond-buying by Japanese trust funds (seen as a proxy for pension funds) in January and February – JPY2trn each month. The March buying figures, released early April, will be instructive.

While the GPIF clearly seems to have more room in its portfolio to buy foreign bonds, we see two reasons why the GPIF may not choose to accelerate its foreign bond purchases right now: i) The weighted yield advantage of foreign bonds (FTSE WGBI ex JPY) over JGBs has dropped to 70bp today versus spread levels of 220bp a year ago and ii) USD/JPY is above 110 and volatile. Slim pickings on overseas bonds and a $/JPY at the top of the range and trading on a 10% annualized volatility does not seem a recipe for aggressive investment outflows right now. That could change were $/JPY closer to 100.

Improved USD funding should take sting out of $ rally

Thursday, March 12th marked a sea-change in USD money markets and USD pricing in FX markets. US commercial paper (CP) markets – a key source for banks and corporates for short term USD funding – broke. Driving this was the $139bn of outflows from Prime Money Market Funds (a key investor on CP) as end-investors shifted their exposure away from funds with a private sector credit risk and into government-backed funds. Now widely discussed, the loss of USD funding triggered wide-spread dislocation across money markets (e.g. the 3m JPY basis swap widened to -140bp) and lifted the dollar across the board.

Amongst many fire-fighting measures, the Fed and the US Treasury have since re-introduced schemes to support the CP market directly (CPFF & MMLF) and measures to support investment grade corporate issuance (PMCCF and SMCCF). Along with the promise for unlimited QE, the Fed has managed to introduce some calm into money markets. We expect even calmer conditions once the Japanese financial year-end has passed (March 31st) and the Fed starts its CPFF program in April. A turn-around in the basis swap should take some upside pressure off USD/JPY.

Pressure eases from the cross currency basis, $/JPY should ease too 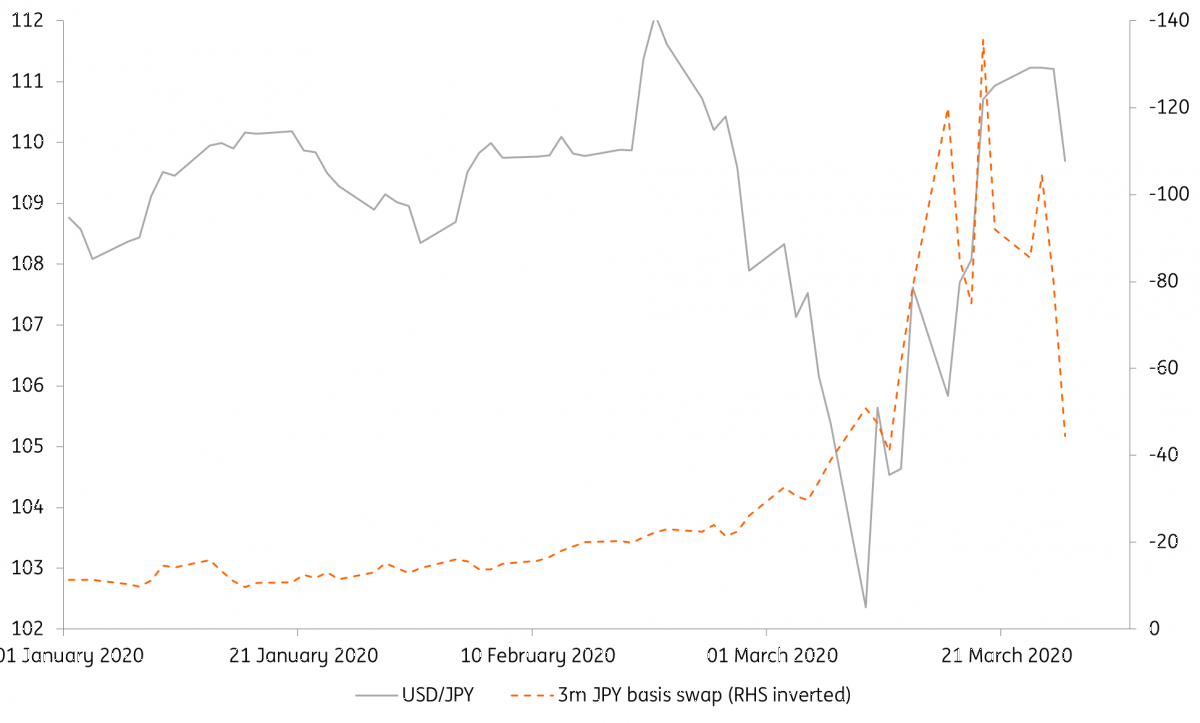 The JPY is still a safe haven

This is the third significant bear market in equities since 2000 and $/JPY typically declines. A familiar call to action in a financial crisis is to buy the short-end of the US Treasury market (correct in 2020) and sell the dollar (wrong). With the Fed flooding the market with dollar liquidity and Covid-19 proving the great equalizer for world growth, we think USD/JPY will ultimately come lower.

In all, we think USD/JPY should be trading back at 105 relatively quickly. Our call for 100 later in the year is a bit of a stretch (the GPIF may fund foreign debt attractive under 105) but is certainly the direction of travel.