Yesterday’s signals were not triggered as unfortunately the bullish doji reversal closed just a pip or so below the support level identified at 0.9986, however the level was quite accurate as the low of the day.

Trades may only be entered between 8am and 5pm London time today.

I wrote yesterday that the picture had become more bearish as the USD weakened and the former support at 1.0028 flipped to become new lower resistance. It was also more obvious that the price movement was contained by a bearish price channel. This was a good call as the price continued to fall bearishly before eventually turning around just below the support level I had identified at 0.9986.

The price channel shown in the chart below has been adjusted accordingly and now the trend lines run perfectly symmetrically which is always a good sign of improved reliability. The resistance at 1.0025 looks very attractive and obvious as a good place for a short trade entry if there is a strong bearish rejection there at the first attempt to break above it, so I would take a bearish bias if that scenario plays out later. 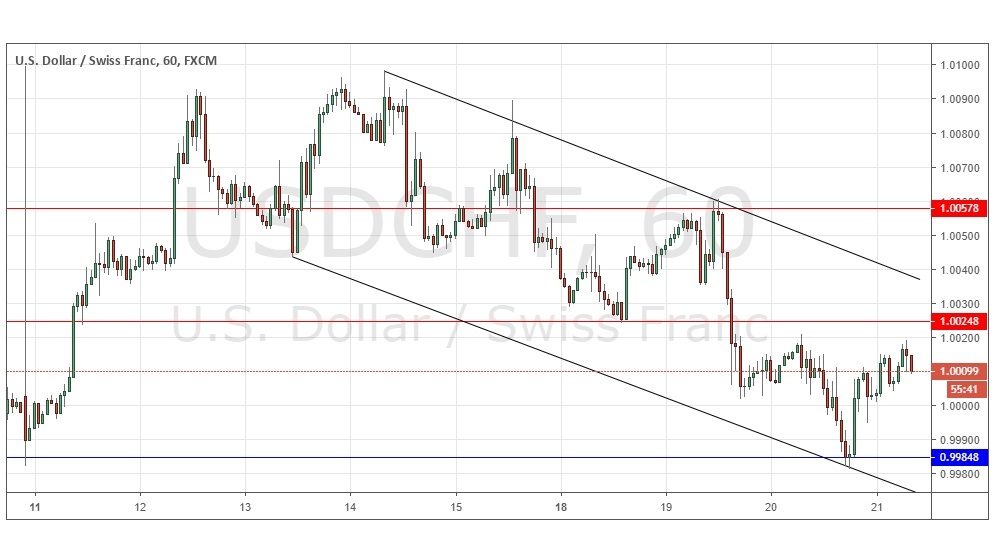 There is nothing of high importance due today regarding the CHF. Concerning the USD, there will be a release of Core Durable Goods Orders at 1:30pm London time.