Global stocks rose on Friday as investors moved to buy the dip. In Europe, the German DAX rose by more than 1.3% after the positive results by Deutsche Telekom. The company’s net revenue for the quarter rose to 28 billion euros while its adjusted EBITDA jumped to 9.9 billion euros. In France, the CAC 40 index jumped by more than 1.5% while the Stoxx 50 moved upwards by 1.3%. These gains could be temporary because of the rising energy risks in the bloc. Natural gas prices have jumped sharply as investors react to the new sanctions by Russia.

American stock futures rose even after Jerome Powell warned of the Fed’s policies. In a statement, he said that taming inflation will cause some pain. He said that taming inflation without causing a recession will depend on many factors outside the bank’s control. Nonetheless, he pointed that the bigger risk for the economy is a situation where inflation gets entrenched in the economy at high levels. The bank is expected to raise interest rates by 0.50% in the next two meetings and then shift to 25 basis points increases. Twitter came in the spotlight after Elon Musk announced that he was temporarily holding his purchase of the firm.

Cryptocurrency prices attempted to rebound after the spectacular decline that happened this week. The rebound is in line with the performance of stocks. Bitcoin moved just above $30,000 while Ethereum moved above $2,000. Still, Terra LUNA, the coin that was trading at $119 a few months ago, continued falling as the validators stopped working. The token is now trading at $0.0067 while UST, which is its stablecoin has fallen to $0.10.

The ETHUSD pair rose slightly as investors bought the dip. The pair is trading at 2,077, which is the highest it has been since Wednesday. On the four-hour chart, the price is still slightly below the 50-day moving average while the Relative Strength Index (RSI) has moved above the oversold level. The MACD made a bullish crossover. Therefore, the pair will likely resume the bearish trend as bears target the key support at 1,793. 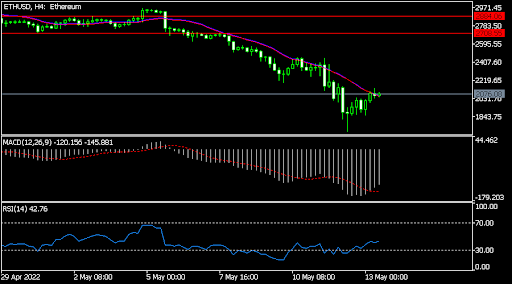 The EURUSD pair continued its bearish trend as concerns of natural gas prices rise. The pair fell to a low of 1.0382, which is close to its lowest level in almost 20 years. Its Bollinger Bands have widened while the Relative Strength Index (RSI) has moved slightly above the oversold level. The Williams %R has also moved to the oversold level. Therefore, the pair will likely keep falling as sellers target the next key support level at 1.0250. 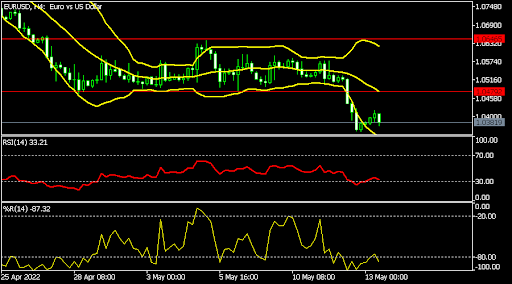 The GBPUSD pair declined to a multi-year low of 1.2185 as the US dollar continued its strength. The pair has moved below the 25-day moving average and the Stochastic Oscillator has moved to the neutral level. The pair will likely remain in the same range during the American session. 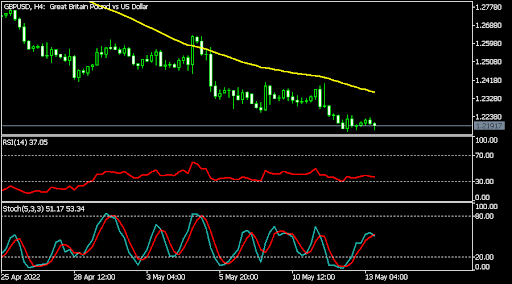