Never underestimate the American consumer – everyone visiting the US has seen its shopping culture, either at the mall or by seeing piles of carton boxes outside houses. However, it seems that economists forecasting the upcoming Retail Sales report for July are either underestimating consumers or at least, being a tad too cautious. That implies figures could beat estimates, boosting the dollar.

Economists expect overall sales volume to have dropped by 0.2% in July after an increase of 0.6% in June. Justification to such pessimism may have come from the see-saw recorded in recent months – June's rise came after a drop in May, as the chart shows: 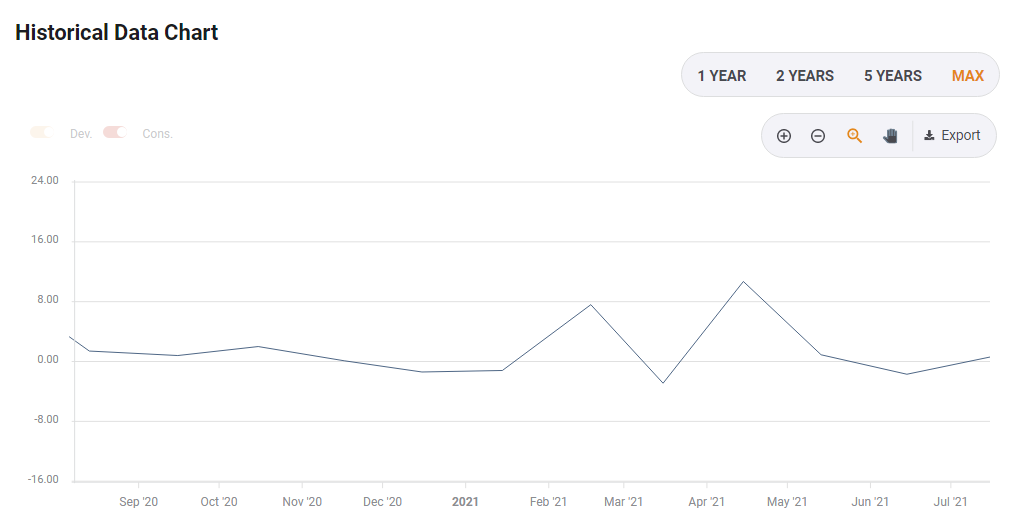 However, July also saw an increase of 943,000 jobs – an excellent figure in absolute terms and also better than expected. Another reason to be optimistic about consumption is the relatively moderate rise in core inflation last month – 0.3% instead of 0.4%. Lower prices allow more consumption.

The Retail Control Group is forecast to rise by 0.3% last month, which is better than estimates for a drop, but substantially below June's leap of 1.1%. Nevertheless, that also seems like a low bar – making it easier to cross.

Here are Control Retail Group figures in the past few months:

Overall, there is room for an upside surprise which would be positive for the dollar.

Even if the cautious consensus has it right, the dollar may have room to rise as the wind is blowing in its back. The greenback is benefiting from fears that the Federal Reserve would taper its bond-buying scheme sooner rather than later, according to reports by both CNBC and the Wall Street Journal. An announcement could come as soon as September.

It is hard to see a mediocre consumption report changing that notion, while upbeat statistics could only strengthen that notion – the trend is in favor of the dollar.

The greenback is also benefiting from a risk-off mood stemming from downbeat Chinese figures, the collapse of the Afghan government and the spread of the Delta covid variant in the US and elsewhere. The mood needs to significantly change to make it a dollar-hostile environment.

US Retail Sales figures for July are set to rock markets, and a mix of low expectations and a greenback-positive mood imply the dollar could move higher in response to almost any outcome.