Pay your money and take your choice. The American adage perfectly captures the economic situation.

Nonfarm Payrolls are forecast to add 180,000 positions in February, far better than the 89,000 average loss in December and January, far worse than the 473,000 gain in October and November. The Unemployment Rate is expected to be unchanged at 6.3%.

Purchasing Managers' Indexes (PMI) for manufacturing from the Institute for Supply Management (ISM) in February were much better than predicted. The GDP forecast from the Atlanta Fed is running at 10% in the first quarter. Texas and Mississippi have ended all business and social restrictions, other states and economic growth are sure to follow.

For the opposite view, ADP February payrolls missed expectations, service PMIs were lower in all categories except prices and Initial Jobless Claims at 730,000 have made no progress in three months with three-quarters of a million people laid off each week.

It is somewhat unusual for the manufacturing and service indexes to move in opposite directions in one month particularly since both have improved in tandem over the past half year.

In January the overall manufacturing index slipped to 58.7, but December's 60.8 reading had been the best in 30 months. The six month average of 58.7 compares with the best scores of the three-year factory revival before the pandemic.

The forecast for February was status quo at 58.8, instead the reading matched the three year high at 60.8.

Component indexes in manufacturing also performed well. The New Orders Index had fallen to 61.1 in January from December's 67.5. In February it moved back to 64.8. Employment was at 52.6 in January, its highest in 19 months. A slight gain to 53 was predicted, in fact the index rose to 54.4, its strongest since March 2019.

The overall index at 58.7 was the highest in 26 months. No change was predicted for February. In reality it dropped to 55.3, the lowest scored since May. New orders were at 61.8 in January the highest since July. The consensus estimate was 55.4, the result was 51.9, the poorest since May's 41.3.

What can we make of the divergence in the two indexes?

The first point is basic, one month is just a data point. The general trend in both indexes and their components has been higher over the past six months. That direction is unchanged. All the indexes in both sectors remain above 50 and in expansion.

Manufacturing not services is considered the leading indicator for the overall economy. The logic of that designation, predicated on the much longer lead times required for increasing or decreasing factory production is the likely answer for the February disconnect between the two indexes.

California's December and January lockdown and reimposed restrictions in several other states, had an immediate impact on many service businesses. Managers again faced declining sales and responded with reduced optimism. The imposition had far less effect on factory managers whose orders, hiring and outlook are conditioned by the recovery expected in the second and third quarters and so their optimism was undimmed.

Although payrolls from ADP are often cited as an indicator for the NFP numbers two days later, the monthly correlation is weak. January is an example. ADP was predicted to produce 49,000 hires. The resulting 195,000 had no bearing on Nonfarm which added a miserly 49,000 as forecast.

The trend relationship between ADP and NFP is good, it is almost impossible for the two counts to move in different directions for any appreciable time. But from one month to the next the strength or weakness of one has little to say about the other.

The governors of Texas and Mississippi announced this week that their states would be fully open with no mandated restrictions on businesses, social gatherings or schools. Other states are sure to follow in quick order. Official sanction after a year of government imposed restrictions will raise spirits nationwide.

Retail Sales jumped 5.3% in January fueled by the December stimulus payment of $600. With more individual and family grants to be awarded by the $1.9 trillion package before Congress, another burst of consumer spending can be expected in the months ahead.

The psychological relief from the end of the pandemic combined with the free government money more than explains the Atlanta Fed GDPNow prediction of 10% annualized growth in the first quarter. 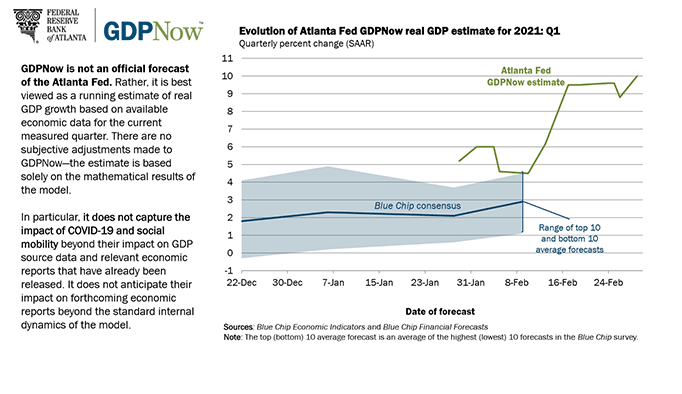 Economies at inflection points, when growth speeds up, slows down or reverses, are rife with contradictory signals. Such is the case now.

Business managers have been consistently optimistic for six months but until very recently were reluctant to hire. New Orders have rocketed higher but 10 million pandemic unemployed are still without jobs.The service sector outlook dims for a month but the trend remains positive.

The US dollar and Treasury yields have rebounded from their lows, but await confirmation that the economy has launched into the New Year orbit.

Nonfarm Payrolls could belie forecasts and resume strong growth in February and markets will respond if it does. But in the long run it will not matter for expansion lies ahead.

In a few months the signs of the coming boom will seem obvious, but for now they are just points in the data fog.