The two-year American labor market recovery will be less important to markets on Friday than a war half-a-world away that could determine the condition of the US economy and Federal Reserve policy for the rest of the year.

Fed governors are expected to raise the fed funds rate by a quarter point at the March 16 bank meeting. The Russian invasion of Ukraine has already dropped the prospective increase by half. A little over two weeks ago the odds for a 0.5% increase were 65.7% in the futures market.

February’s jobs numbers, however, tell us next to nothing about the economic changes that may be wrought by the Ukraine war.

Brent had jumped 13.2% to $106.61. These increases have taken place without Europe and the US targeting the Russian energy industries with sanctions, a distinct possibility in the days and weeks ahead. Were that to happen, global oil prices would go much higher.

Europe imports almost 40% of its natural gas and 25% of its oil from Russia. The US now receives about 600,000 barrels a day from Russia, even though it has vast domestic supplies, and was self-sufficient in energy and an exporter in 2019 and 2020.

Consumer inflation in the US reached 7.5% in January, a four-decade high, with WTI prices averaging $82.47 for the month. Tuesday’s close of $104.81, represents a potential 27% jump in the world's most basic industrial commodity.

The US recovery, barrelling along at 7.2% in the fourth quarter of 2021, could see a swift application of brakes if soaring inflation inhibits consumer spending and the Federal Reserve’s aggressive control policy is blunted by economic and political distress.

A rapid increase in consumer prices would excite labor demand for higher wages. In the current tight job market, firms would be forced into even stiffer competition, guaranteeing an intensive wage-price spiral. A possibility that must give the Fed nightmares.

The Atlanta Fed’s GDPNow model gives a glimpse of the potential damage a prolonged conflict could inflict. Its latest estimate for the first quarter is zero growth. 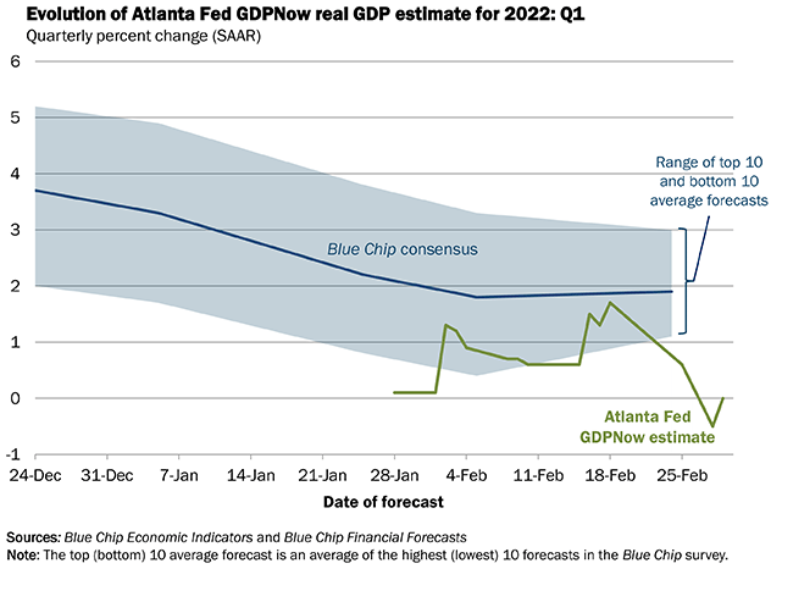 Let's look at the labor market background for the February payroll.

Nonfarm Payrolls averaged 540,000 new positions a month from August through January. Nothing in the attendant labor market indicators anticipates a decline in February.

Initial jobless claims have continued to retreat from their January rise, though they are less than half-way back to the late December low. The four-week moving average was 199,750 in the December 24 week, by January 28 it was 255,250. The average has since fallen to 236,250 on February 18.  Individual claims are expected to drop to 225,000 for February 25 from 232,000 the prior week when reported on March 3.

The Job Openings and Labor Turnover Survey (JOLTS) recorded 10.925 million unfilled positions in December. From June 2020 through year end JOLTS has averaged 10.758 million openings per month. Any one of those months is a record, seven in a row with many more to come, is a new and largely unexplained phenomenon for the US economy. Before the pandemic lockdown in March 2020, the highest single month had been 7.574 million in November 2018. 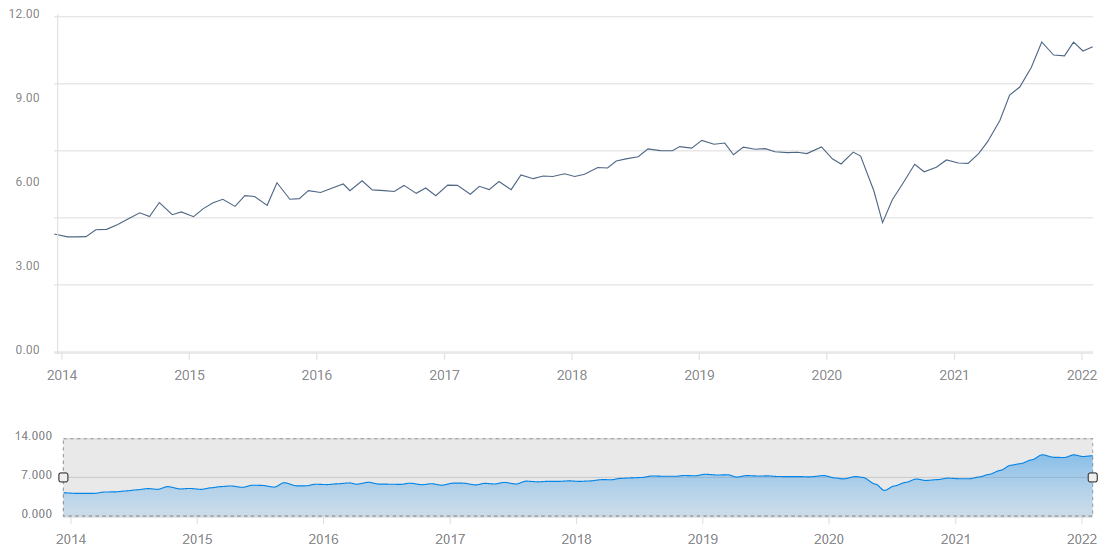 Employment Indexes from the Purchasing Managers’ Surveys of the Institute for Supply Management have been at or above the 50 division between expansion and contraction for six months in the service sector and 15 in manufacturing.

The manufacturing employment index slipped to 52.9 in February from 54.4 in January. From September through February the average was 52.9. The services employment index was 52.3 in January with a 52.4 average for the six months. February is predicted to be 53.5 when issued on March 3.

Risk aversion from the Russian invasion of Ukraine has scrambled markets with potential for the damage to spread to the global economy depending on how long the war lasts, how much pain Europe and the US attempt to inflict on Russia and President Putin’s response.

Equities in the US have been falling since January, largely on the anticipation of much higher interest rates as the year progresses. 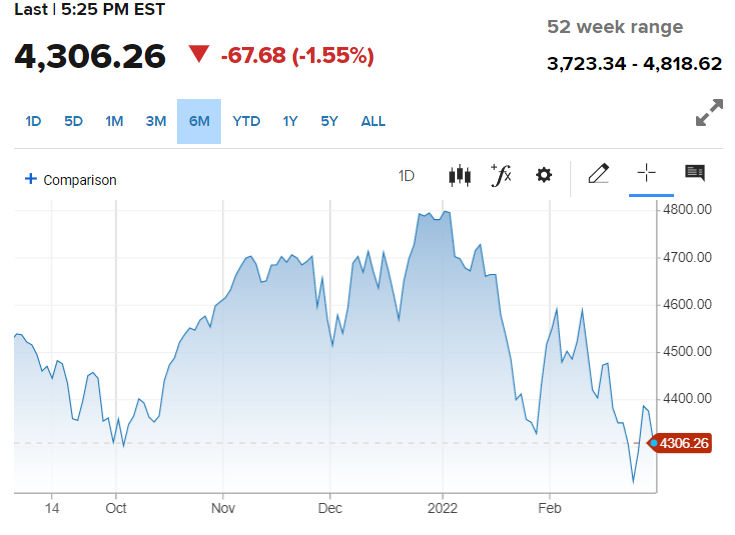 Treasury yields and the US dollar have seen a dramatic resort to the safety trade since the Russian invasion began on February 24.

The 10-year yield has fallen 27 basis points from its close at 1.976% on February 25 to its finish on March 1 at 1.709%. The 2-year yield closed at 1.586% on March 25. As of Tuesday’s conclusion it had lost 28 points to 1.307%. Treasury bonds, whose prices trade inversely to yields, have been in great demand as investors and institutions seek the safety of US securities. 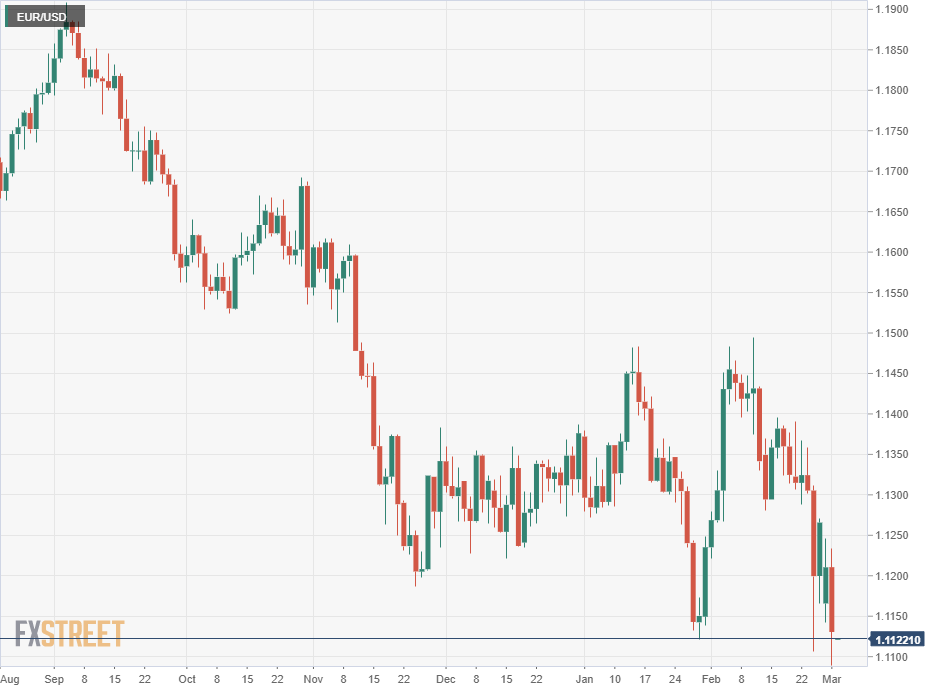 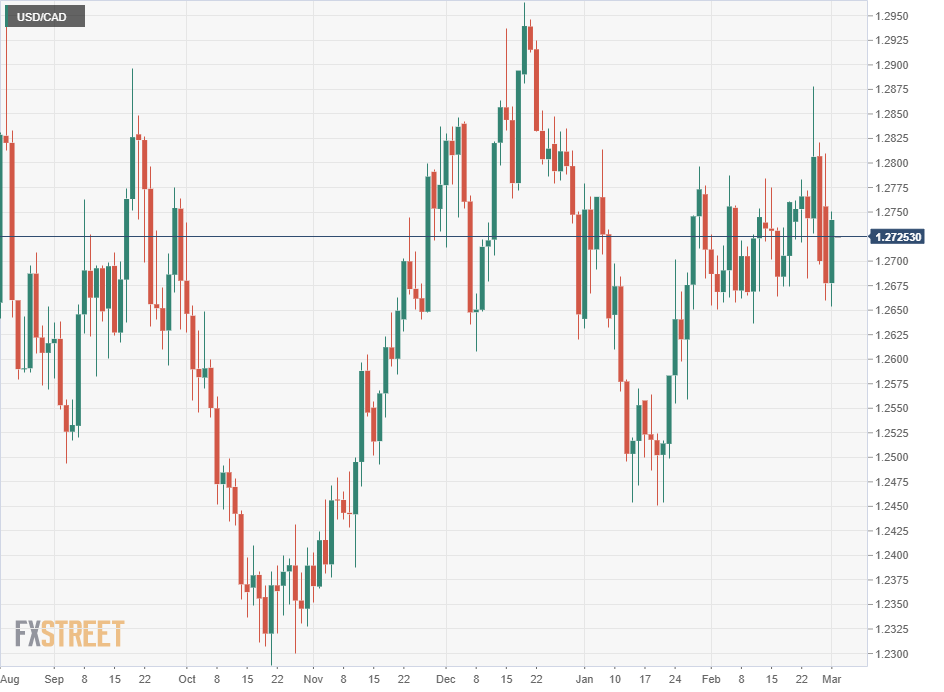 Given the uncertain and potentially dangerous economic impact of the Ukrainian war, a weak NFP number will undermine the market’s fed funds expectations for the year and continue the stronger dollar and Treasury safety trades. A strong NFP will do nothing to calm the malestrom spreading from Ukraine.

If the US economy is slowing, a possibility underlined by the Atlanta Fed’s GDP estimate and job creation is falling, there is limited outlook for improvement. Soaring oil prices will keep inflation hot with double digits likely if WTI stays above $100.

Russia appears willing to force the military issue with Ukraine. Sanctions will become more stringent and could extend to the Russian energy sector if the attack on Kyiv and other cities turns into a bloody street battle with many civilian casualties. If that happened oil prices could rise high enough to cause considerable long-term economic damage.

It is hard to see the Federal Reserve or any other central bank raising rates under those circumstances. Market expectations for the total fed funds increase to the end of this year have already fallen from 125 basis points to 75 basis points.

Fed Chair Jerome Powell will have a chance to allay some of these fears at his two appearances in Congress on Wednesday and Thursday. His challenge will be to reassure markets that the governors can address the inflation that is almost sure to increase, while guarding against the risks to financial markets and the global economy generated by the dangerous and unpredictable outcome of war.

The Ukraine crisis is not of the Fed’s making but if its sparks higher inflation and an economic slowdown, its response may be the most difficult decision since Paul Volker and his colleagues manned the Eccles ramparts.