Americans, troubled by the persistence of inflation and the pandemic, are not expected to have recovered much of their historic optimism after their assessment of the future reached its lowest point in a decade in August.

The Michigan Consumer Sentiment Index, to be released on Friday, September 17th at 14:00 GMT, is forecast to rise to 72.2 in September from 70.3 the month before. Even during the lockdowns of early 2020, the index had only fallen to 71.8 in April. 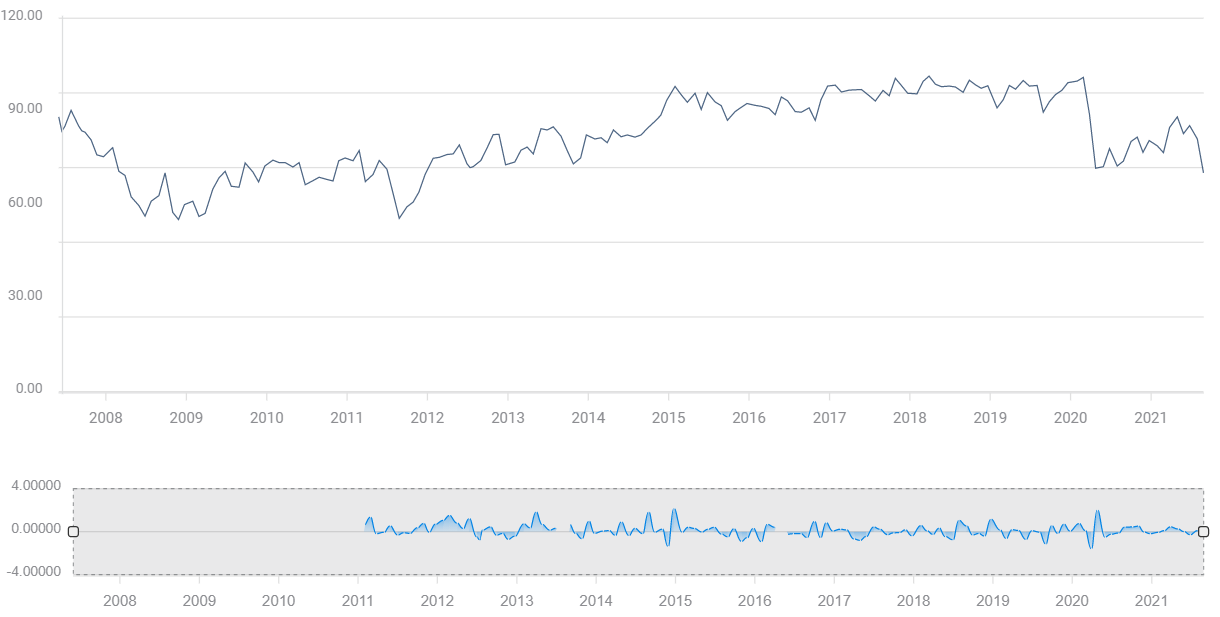 Job creation cooled markedly in August with Nonfarm Payrolls adding just 235,000 positions far less than the 750,00 forecast or the more than one million average of June and July. The Job Openings and Labor Turnover Survey (JOLTS)  in July listed 10.9 million open positions, the sixth record month in a row so the paucity in hiring one month later is a bit of an economic puzzle. 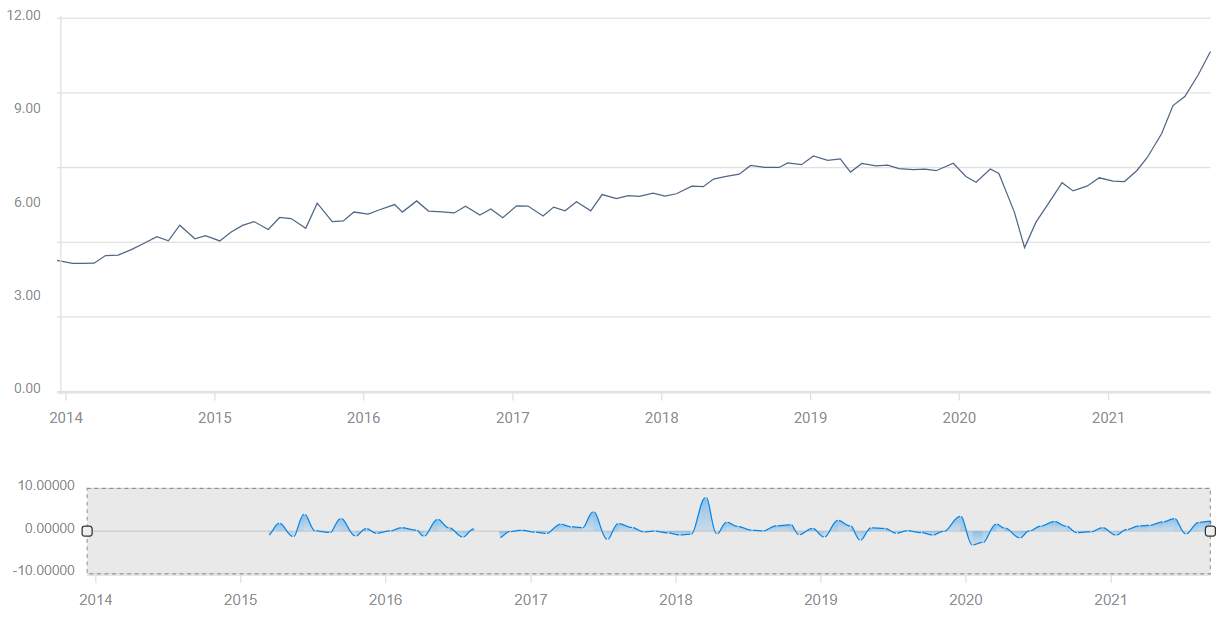 Analysts had expected that the September expiration of supplementary federal unemployment benefits would encourage many people to return to work.

Employers may have cut back on hiring after August’s weak Retail Sales but considering the half-year backlog that seems unlikely.

Inflation seems a more promising candidate for the collapse in consumer outlook in August.

Headline inflation has averaged 3.9% this year. Since the first quarter it has measured 5.1%. The staples of food, housing costs and gasoline have seen some of the largest increases. A gallon of regular gasoline has increased 41% this year and 51% since the 2020 presidential election.

This sudden and seemingly intractable inflation is bound to make families reassess their budgets and perhaps postpone purchases until prices are more stable.

Estimates for third quarter economic growth in the US have dropped sharply in the  last month.  After averaging more than 6% for most of the summer, the Atlanta Fed GDPNow forecast has fallen to 3.7% in the last two weeks.

Part of this decline reflects the unexpectedly weak Retail Sales figures in July, -1.1% instead of the -0.3% projection. Sales are forecast to fall another 0.8% when August is reported on September 16.

The surprise plunge in the Michigan Consumer Sentiment Survey in August to 70.2 (revised to 70.3), far below the 81.2 consensus forecast shocked markets. Interest rates in the US dropped sharply, taking the dollar with them and equities rose with the reduced prospect for a bond taper from the Federal Reserve.

The US economy and GDP is based on consumption.  If consumers are not happy, they will pull back on spending until the future has a more optimistic focus.

Rising prices are reducing the purchasing power of American families. Inflation-adjusted Average Hourly Earnings fell 0.9% on the year in August following a 1.2% drop in July.

The inflation threat to consumption is underlined by the recent drop in the Atlanta Fed’s GDPNow estimate and the decline in Retail Sales.

The prospect of 3%-4% core inflation and  4%-5% headline CPI for the next six months or a year, is likely to have a greater negative impact on consumer optimism and spending than any number of open jobs.

The persistence of the Delta variant is also taking an unknown toll on consumer confidence.  Although case and hospitalization rates have begun to decline, the possibility of yet another wave remains to depress outlook. It will take many months for this drag to wholly dissipate.

For the US growth outlook, a prolonged period of low consumer optimism is the chief danger. If consumers decide that the uncertain future demands a pull-back on spending, the recovery will quickly peter out.

The market risk for the Michigan Sentiment is decidedly negative. If sentiment falls it takes US economic prospects down with it and Treasury rates and the dollar will follow. Even equities will find it hard to balance lower interest rates against fading economic growth.

The predicted modest rise in consumer sentiment is hardly an improvement. The unhappy consumer signalled by sentiment numbers near a 10-year low, will not provide the spending needed to propel the economy in the second half of the year.

Consumer sentiment is a warning that all is not well with the US economy.

NZD/USD remains pressured towards 0.6300 during the three-day downtrend, down 0.15% intraday at 0.6335 by the press time, as Kiwi buyers brace for the 0.50% rate hike amid a sluggish Asian session on Wednesday.

AUD/USD portrays the market’s anxiety as it seesaws around 0.7020 ahead of the key Australia wage price data and the FOMC meeting minutes on early Wednesday in Asia. The risk barometer pair dropped during the last two days amid recession.