Everybody wants to be ahead of the curve – the Federal Reserve ahead of inflation and market participants ahead of their peers. The dollar is already falling on expectations of easing prices – but this rush could prove premature. I think that low expectations for August's Consumer Price Index report are a recipe for a greenback comeback.

One of the comments that triggered the recent dumping of dollars came from US Treasury Secretary Janet Yellen. The former Fed Chair said that she expects lower inflation in August due to the ongoing drop in gasoline prices. Indeed, it is hard to argue that oil squeeze would fuel a negative print in headline CPI. However, Core CPI – everything excluding food and energy prices is what matters to the Fed.

The economic calendar is pointing to Core CPI coming out at 0.3% MoM, a repeat of July. While forecasting that the near past will repeat itself seems logical, it is a significant clmb down for economists. It is the lowest estimate in 11 months: 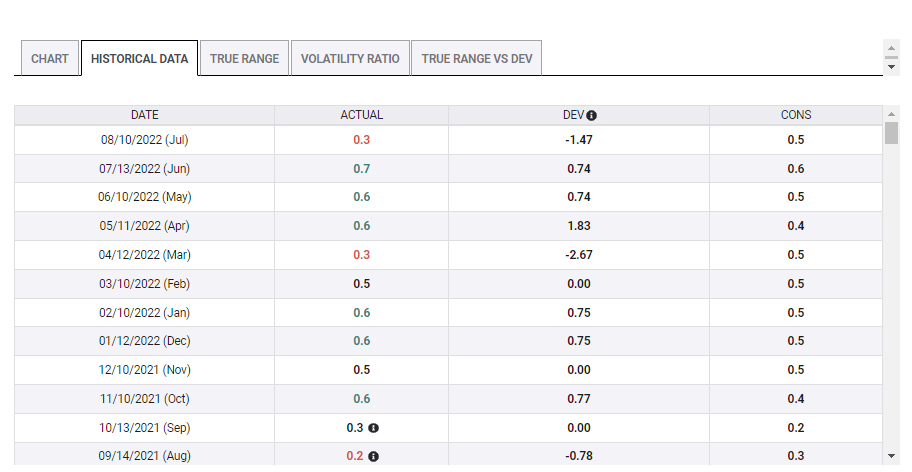 After three consecutive months of underestimating Core CPI, the consensus overestimated in July – 0.5% expected, actual only 0.3% – and now the pendulum has swung in the other direction. Has it gone too far? That is my argument.

The American economy is still steaming hot, gaining 315,000 jobs in August and benefiting from growing demand for services such as leisure and hospitality, in the first full post-pandemic summer season.

It is hard to see another month of moderate price rises. A minor beat of 0.4% would show that the Fed still has a long way to go to cool inflation. A 0.4% monthly increase is roughly 5% annualized, far above the bank's 2% target.

However, as every tenth matters, we need to consider all scenarios.

1) Higher than expected: Assuming expectations are too low, a beat such as 0.4% or 0.5% on Core CPI would spark dollar buying, raising the chances of a fourth consecutive jumbo-sized interest rate hike and undoing some of the downside correction. Such a counter-move to dollar sales which have been triggered by expectations for softer Fed moves in September.

The Fed is set to raise borrowing costs by 75 bps next week, doing it for the third time. In his last speech before the bank's blackout period, Fed Chair Jerome Powell did not push back against market expectations of such a move later in the month.

2) As expected: Core CPI of 0.3% MoM would serve as a second consecutive slowdown in underlying inflation, reflecting under 4% annualized Core CPI. That is still high, justifying the upcoming 75 bps move, but also adding to the case of a slowdown by the bank.

A scenario of a 50 bps hike in November would gain more strength. The dollar would likely consolidate recent losses, without going too far. Attention would move to Retail Sales figures coming out later in the week.

3) Below expectations: Any surprising deceleration in Core CPI would hit the dollar hard. A 0.2% monthly increase is something like 2.5% in annualized terms, almost at the Fed's target. Officials would warn that it could be a one-off, but markets would shoot first and think later.

It would cast doubt on the Fed's upcoming meeting, sending investors to closely watch Nick Timiraos of the Wall Street Journal, the person who conveyed the previous last-minute change by the Fed back in June.

Even in the more likely scenario of the Fed sticking to its plans for September, these drops in inflation would trigger expectations for rate cuts in 2023. In the short term, the dollar would tumble.

The CPI release provides the first hard evidence of inflation, which remains the Fed's focus. Surveys of inflation expectations are only opinions, not prices, and the PCE inflation report is due out only later in the month.

Market volatility is high and is set to further rise in response to the release – trade with care.

EUR/USD trades below 1.0750 for the first time since early January, as demand for the American Dollar persisted in a risk-averse scenario. Poor European data added to the Euro's weakness.

Spot gold remains under selling pressure after falling to $1,860.20 a troy ounce at the beginning of the day. The bright metal peaked on Monday at $1,881.35, from where it resumed its decline amid the broad US Dollar demand.

Binance Coin (BNB) price must see quite a few crypto traders puzzled this morning when looking at the charts. With several cryptocurrencies slipping lower, the risk is increasing that cryptocurrencies are lagging on the overall market reaction in the wake of the strong US job numbers.

S&P 500 started a brief correction on NFPs outdoing expectations, with other data confirming job market tightness as much as Dec NFPs upward revision to 260K.