Another inflation figure, another upside surprise? There is a good chance that the Federal Reserve's preferred gauge of inflation would show upside price pressures. That would be dollar positive.

What is Core PCE and why is it important?

The Personal Consumption Expenditure (PCE) is an inflation gauge that has a different methodology compared to the Consumer Price Index. Despite the fact that the PCE is published after the CPI report, it is significant because the Fed says so – and the central bank sways the most influence over currencies.

More specifically, Core PCE is a derivative of the PCE which contains only the least volatile items – the ones the central bank has more influence on. It excludes energy and food prices, for example, which are more prone to global supply influences. The rest is affected by expenditure, which the Fed can impact via interest rates.

Annual Core PCE has been rising, but at just above 5%, it remains below Core CPI, which is above 6%. 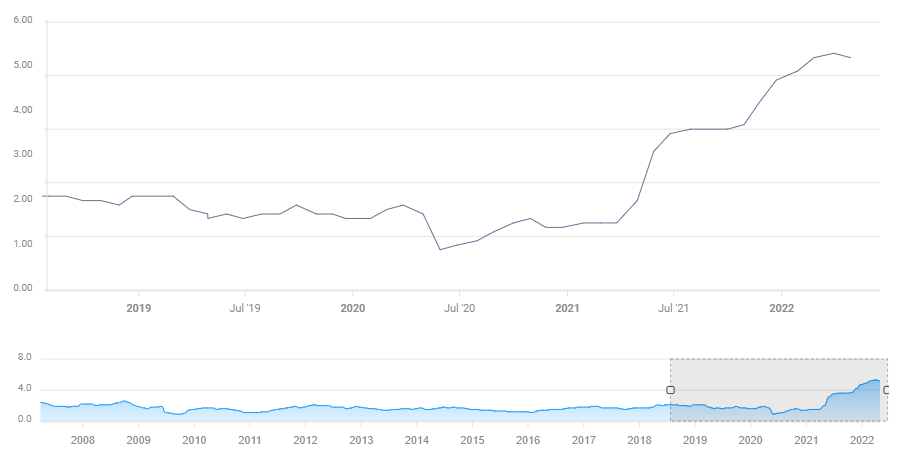 Core PCE has been historically more moderate than Core CPI, and its publication tends to meet expectations. Economists' expectations are shaped by the already-published Core CPI figure.

Why this release could have a bigger impact

In the upcoming report for April 2022, the annual figures will surely fall, as April 2021 is dropped off the calculation. That month last year saw a surge in prices related to the reopening and to stimulus checks. That is why the focus is on the monthly figure.

The scarcity of surprises means every little change matters, and economists are projecting 0.3%, making a print of 0.2% or 0.4% meaningful.

Surprises are not significant and not very common in Core PCE MoM:

I am expecting 0.4% due to the fact that Core CPI surprised to the upside with a whopping 0.6% – double the estimated 0.3%. Despite the differences in methodology, half the monthly increase seems too modest – even for the more moderate Core PCE figure.

Why the dollar could rise

So how will the dollar respond? First, the greenback has room to rise in a response to an upside surprise mentioned above, as it would imply a faster pace of rate hikes. Fed officials still have the next week to respond to the data, before they enter their "blackout period." An upbeat figure could trigger hawkish responses.

Secondly, the release comes just ahead of the weekend, when traders tend to take risks off the table. The rush to reposition would intensify demand for the dollar.

The dollar has been whipsawed in recent days, but when it comes to data, the greenback seems to have been in a win-win situation. A better figure means more rate hikes and a stronger dollar, while a weak figure implies the global economy is weakening – sending investors to the safety of the world's reserve currency.