Mamas, don’t let your children grow up to be cowboys.

Don’t let them pick guitars or drive them old trucks.

Let ‘em be doctors and lawyers and such…

Even with someone they love.

One of the correlations I have uncovered in my years of researching Mundane and Financial Astrology as it relates to human activity, is that Uranus in a sign points to a sector of the economy that undergoes a boom and bust.

In its 84-year orbit around the Sun, Uranus spends about 7 years in each sign. Each sign rules a particular segment of the economy, or market sector. Aquarius, for example, rules technology. When Uranus made its seven-year journey through Aquarius, 1995-2003, the tech-heavy NASDAQ index soared to record highs – and then collapsed dramatically. That is, Uranus first entered Aquarius on April 1, 1995. It lasted only two months before retrograding back into Capricorn, June 9, 1995 through January 12, 1996. It stayed in Aquarius until March 10, 2003, when it briefly entered Pisces for six months (until September 15, 2003), before retrograding back into Aquarius, until it finally exited for good on December 30, 2003. Thus, it would be correct to state that Uranus was fully in Aquarius January 12, 1996, through March 10, 2003. It would also be correct to state that Uranus was mostly in Aquarius from April 1, 1995 through December 30, 2003. For our purposes of demonstrating the boom/bust nature of Uranus in a sector of the economy (or stock market) that is ruled by the sign Uranus is in, it doesn’t matter which beginning and end date is used. In either case, that market sector will explode to a peak, and then collapse, usually when Uranus is in the seven-year segment where it does not retrograde back and forth between signs. 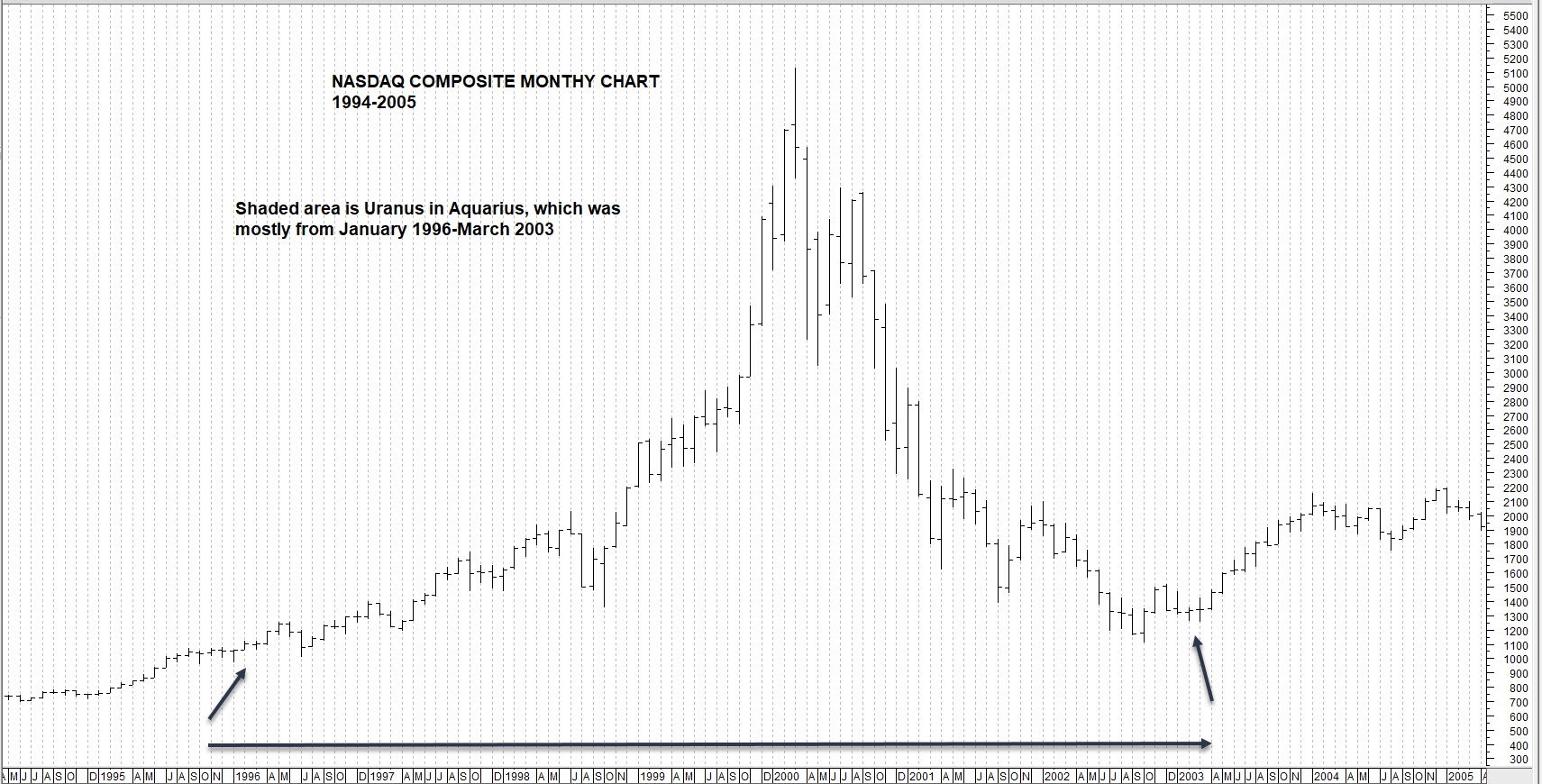 The same pattern can be observed when Uranus next moved into Pisces. The uninterrupted portion of that transit was in force December 30, 2003 through May 28, 2010. Pisces rules crude oil. In December 2003, crude oil’s low was $29.66/barrel. By July 2008, it skyrocketed to an all-time high of 147.27, a price appreciation of nearly 400% (similar to the gain in the NASDAQ between the time Uranus fully entered Aquarius, and its peak in price during that transit). However, in the next five months, while Uranus was still in Pisces, crude oil collapsed to 32.48, a loss in value from the peak of 78% - almost the same percent of loss as the NASDAQ’s decline in 2000-2002. 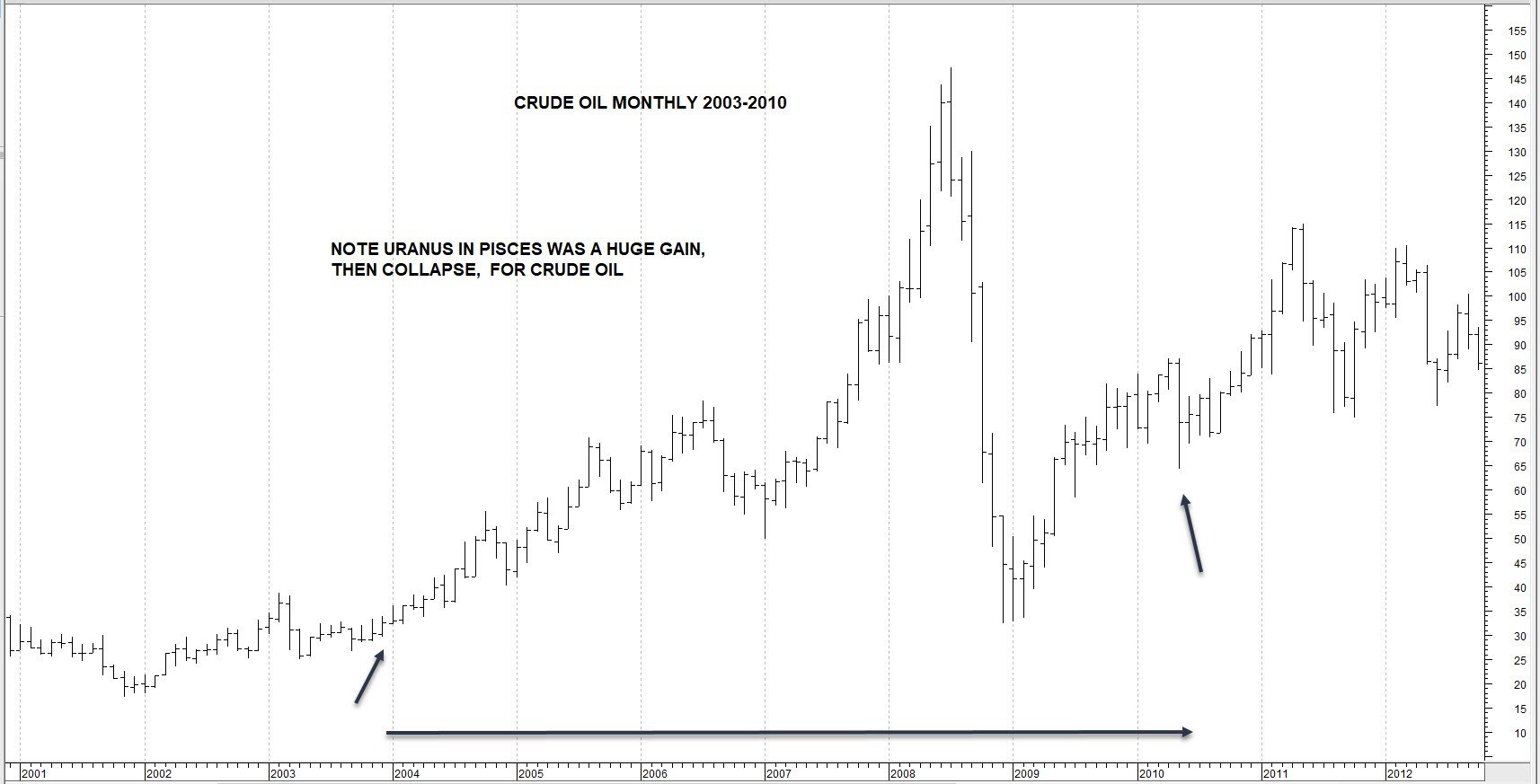 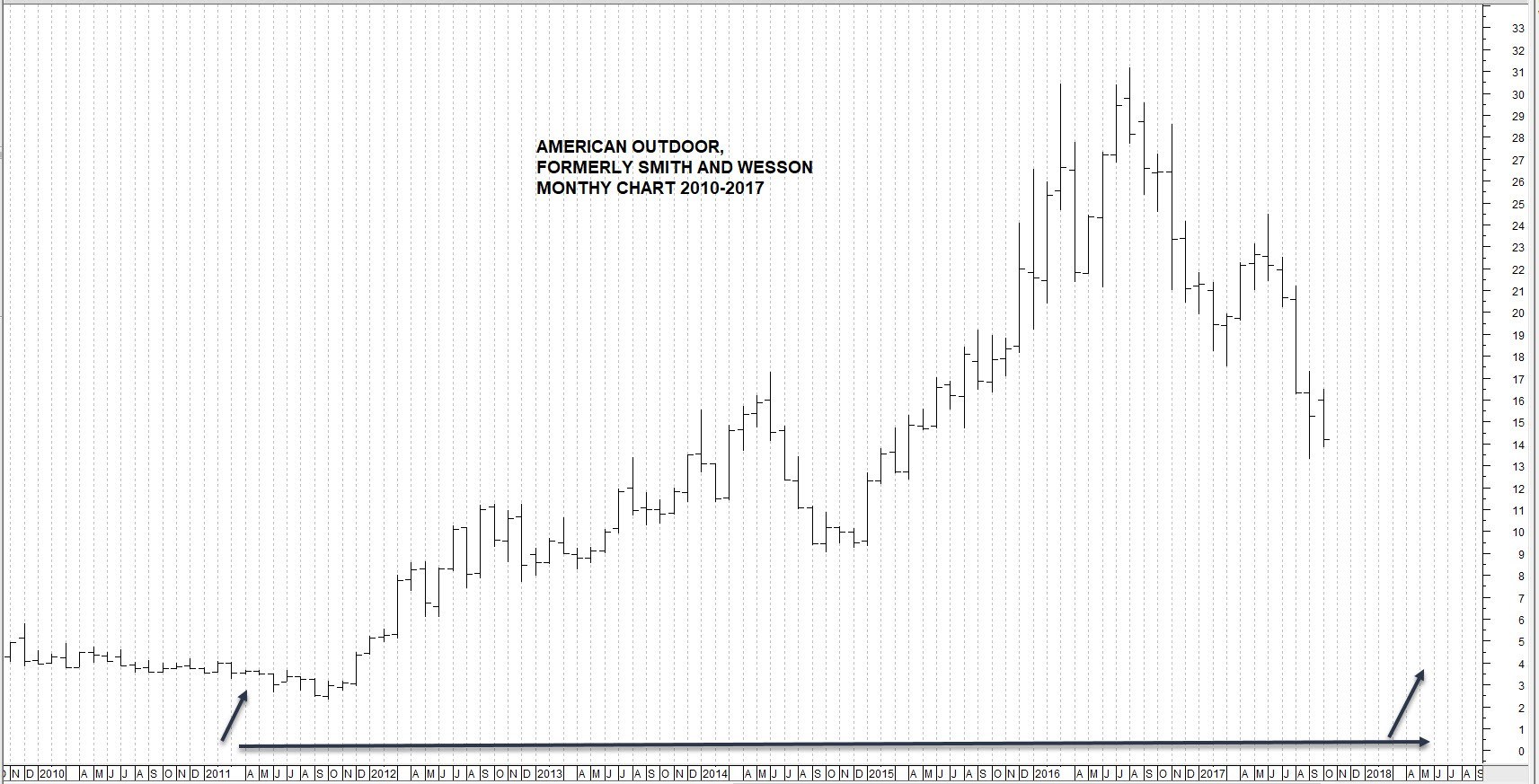 Following its transit of Pisces, Uranus then began its next 7-year journey into Aries. It was fully in Aries as of March 12, 2011, and will continue there until May 15, 2018, when it ingresses for the first of two times into Taurus. One of the main stock sectors that Aries rules is weapons, such as guns. We don’t have a “Guns” sector to draw a chart from, so we will use, as a proxy, the stock American Outdoor (symbol AOBC), formerly Smith and Wesson, a well-known gun manufacturer in the USA.

This now brings us to the next phase of the greater Uranus cycle, which will be in Taurus. Its first entry into Taurus will happen on May 15, 2018. As in previous instances, its first foray into a new sign does not last long. It retrogrades back into Aries, November 6, 2018 through March 6, 2019. It then re-enters Taurus, where it remains uninterrupted until July 7, 2025, when it makes its first ingress into Gemini. It is thus this period of March 6, 2019 through July 7, 2025, that we anticipate the boom/bust pattern to manifest in sectors of the economy ruled by Taurus. That would involve banks and cattle. That is, we anticipate the price of beef (cattle) and/or the stock price of banks will soar close to - or more than -  400% from March 2019 through the following 3-6 years, and then collapse, losing over 50% of its value, and perhaps close to 80%, prior to July 2025. If that indeed happens, then this information alone will cover your cost for this year’s Forecast Book, and all future editions of the Forecast Book for as long as I shall remain on Earth in this incarnation.

This correlation also fits into our view of what will happen to world banks – central banks – over the course of the next 3-7 years. Uranus is the planet of disruption, revolution, and breaking away from tradition. Whatever has been the “norm” of central banks over the past 84 years is vulnerable to revolutionary change. By association, this could also have a huge impact on currencies, especially the US Dollar, which has served as the world standard currency since 1944, shortly after Uranus last passed through Taurus (and was in a square aspect with Saturn). This subject will be discussed in greater detail in the pages that follow, but the projection is that banks will thrive for the next couple of years, and then run into a wall.

The banking rules/laws will change as Uranus will be in Taurus, and especially after Saturn enters in Aquarius after March 22, 2020, square to one another. Money could take on a new form, and be used for purposes we cannot conceive of today. The result of this transformation may be good for banking stocks at first, but then the drastic changes are apt to be met with hysteria, as bankers go “bonkers.” They may be unable to adapt to the unintended consequences of their experiments. Or they may develop a malady, known as “greed,” and/or “hoarding,” which afflicts some non-aware Taurus natives, or people engaged in Taurus-ruled enterprises, which doesn’t go well with an inability to adapt to suddenly changing circumstances. Banking stocks soar. Bankers do not get out at the top. Banking stocks then crash, and then the chickens come home to roost, as depositors rush to withdraw their monies.

Disclaimer and statement of purpose: The purpose of this column is not to predict the future movement of various financial markets. However, that is the purpose of the MMA (Merriman Market Analyst) subscription services. This column is not a subscription service. It is a free service, except in those cases where a fee may be assessed to cover the cost of translating this column from English into a non-English language. This weekly report is written with the intent to educate the reader on the relationship between astrological factors and collective human activities as they are happening. In this regard, this report will oftentimes report what happened in various stock and financial markets throughout the world in the past week, and discuss that movement in light of the geocosmic signatures that were in effect. It will then identify the geocosmic factors that will be in effect in the next week, or even month, or even years, and the author’s understanding of how these signatures will likely affect human activity in the times to come. The author (Merriman) will do this from a perspective of a cycles’ analyst looking at the military, political, economic, and even financial markets of the world. It is possible that some forecasts will be made based on these factors. However, the primary goal is to both educate and alert the reader as to the psychological climate we are in, from an astrological perspective. The hope is that it will help the reader understand the psychological dynamics that underlie (or coincide with) the news events and hence financial markets of the day. No guarantee as to the accuracy of this report is being made here. Any decisions in financial markets are solely the responsibility of the reader, and neither the author nor the publishers assume any responsibility at all for those individual decisions. Reader should understand that futures and options trading are considered high risk.