The tight US labour market plays a crucial role in the effort of the central bank of bringing inflation back to target. Slower growth in labour income should lead to slower demand growth, whereas smaller wage increases will ease pressure on corporate profit margins and reduce the need for companies to charge higher prices. The labour market is characterized by a dynamic interaction between job openings, unfilled vacancies, voluntary departures (quits) and layoffs. In the US, unfilled vacancies and the quits rate have started to decline and one should expect that this dynamic will gather pace, causing a slowdown in wage growth. The question remains to what extent this will bring down inflation, which is why the Federal Reserve’s policy is completely data-dependent.

The US labour market is very tight. The unemployment rate is very low, the number of vacancies is exceptionally high, job turnover as measured by the quits rate is also high, the monthly change in nonfarm payrolls remains high despite the economic slowdown and, unsurprisingly, annual wage growth is strong, even more so for people who switch jobs.

A tight labour market is both a consequence and a cause of strong demand in the economy. This implies it has a crucial, dual role in the effort of the central bank of bringing inflation back to target. On the one hand, slower wage growth should contribute to an easing of inflation pressures because, ceteris paribus, it implies slower growth of labour income. This should weigh on final demand in the economy as well as on the demand for labour, at least in certain sectors. Moreover, smaller wage increases will ease pressure on corporate profit margins, thereby reducing the need for companies to charge higher prices. On the other hand, slower growth will weigh on the labour market through a slowdown in job creation and lower wage growth.

The objective of a restrictive monetary policy is to bring inflation down. To this end, inflation expectations need to be (re-)aligned with the central bank’s inflation target and demand growth should slow down. This is necessary to reduce pricing power of companies and to limit wage growth. The latter is the result of a less dynamic labour market: vacancies and job openings decline. Whether this inevitably requires a significant increase in the unemployment rate is not clear. The usual macroeconomic ‘workhorse’ -the Phillips curve- suggests that a decline in core inflation comes with a big increase in the unemployment rate because the curve is rather flat (chart 1). However, the recent observations are completely out of line with the ‘normal’ relationship, which makes it difficult to gauge what might happen going forward. 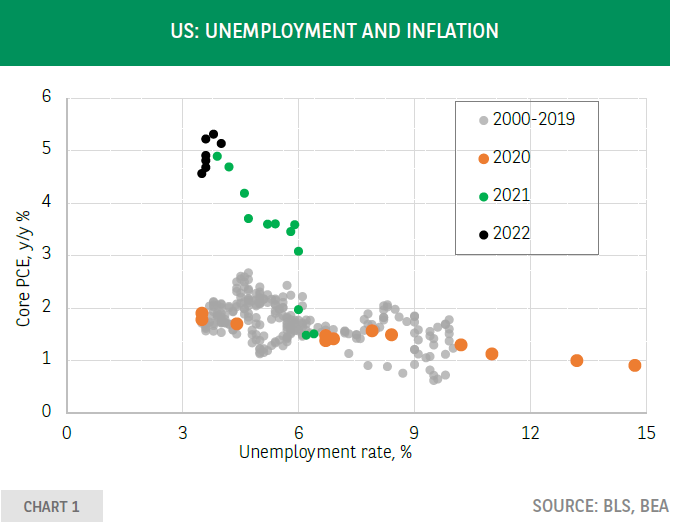 The question of the increase in the unemployment rate is tied to the question of a hard or a soft landing. Federal Reserve chair Jerome Powell was very humble in his recent press conference by acknowledging that “we don’t know, no one knows whether this process will lead to a recession or if so, how significant that recession would be”.

The answer depends on how much tightening will be necessary to bring inflation back to target. This is a function of the sensitivity of demand to higher interest rates and of the influence of weaker demand on pricing decisions of companies and on the labour market.

The latter is characterized by a dynamic interaction between job openings, unfilled vacancies, voluntary departures (quits) and layoffs. These variables influence the pace of wage growth. In an upswing, the number of job openings and unfilled vacancies rises, creating an upward pressure on wages, whereby the wage increase of job switchers is larger than the increase of those who don’t change jobs (job stayers) (charts 2 and 3). Consequently, the quits rate increases (chart 4). In a downswing, unfilled vacancies decline, the difference in wage growth between job switchers and job stayers narrows, layoffs increase and, unsurprisingly in this riskier and less rewarding environment, the quits rate declines (chart 5). Overall wage growth also slows down. At the current juncture, we are in the very early stage of this process -unfilled vacancies and the quits rate have started to decline-, but based on the historical experience, one should expect that this dynamic will gather pace and that slower wage growth will contribute to the decline of inflation next year. The question remains however to what extent, which is why the Federal Reserve’s policy is completely data-dependent.