Inflation seems to have peaked in June in the United States. The continuation of the momentum and the pace of disinflation will depend to some extent on easing of the tightness in the labour market, which continues to support wages. In October, the slight increase in the unemployment rate and the slowdown in nonfarm payrolls gains could well indicate the beginning of such easing. What about wage dynamics? According to the Atlanta Federal Reserve’s Wage Growth Tracker, the first signs of a slowdown are emerging.

This indicator measures, on a three-month rolling average, the median percent change in the hourly wage of individuals observed 12 months apart. According to this indicator a slowdown in wage growth seems to be emerging, although this is still to be confirmed. After peaking in July and August (6.7%), wage growth stood at 6.4% in October (compared to 6.3% in September).

In addition to pointing to a possible wages’ deceleration, this indicator provides another interesting information on the difference in wage dynamics depending on whether individuals are employed (job stayers) or have changed jobs (job switchers). After a strong increase, the slowdown in the salaries of job switchers seems to be well under way (7.6% in October, down continuously since its high of 8.5% in July). On the other hand, wage growth for job stayers recovered slightly in October (5.4%), interrupting a slowdown which began in June (6.1%). If this trend of a slowdown in wage growth is confirmed, which is likely, employees may be less inclined to change jobs for salary reasons, which could reduce the tightness in the labour market. 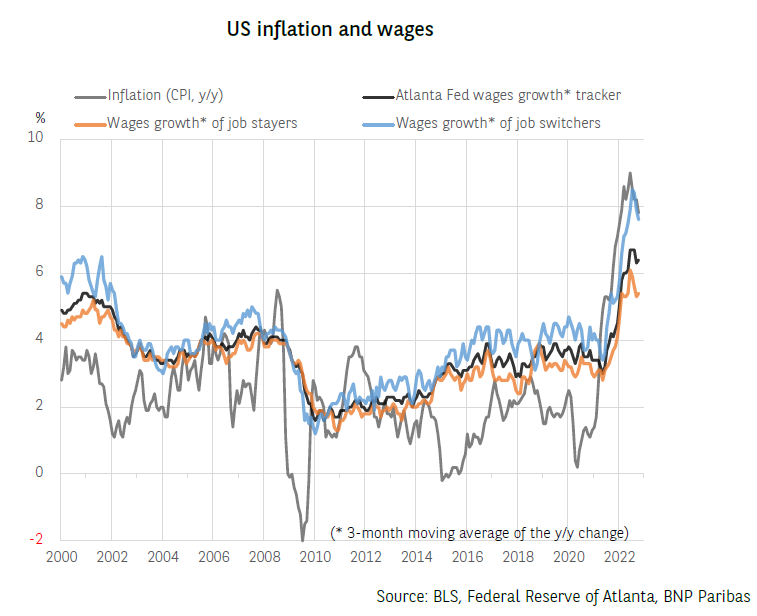