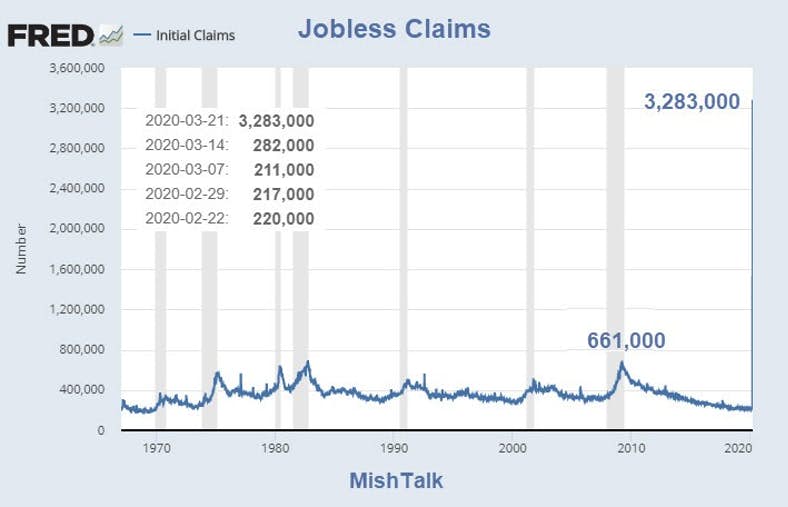 Employers added jobs for a record 113 months through February but that streak will end with a bang in the March as a Record 3.28 Million File for U.S. Jobless Benefits.

We haven’t seen this big of a free fall before,” said Keith Hall, former director of the Congressional Budget Office and adviser to President George W. Bush. “Not even during the Depression…It’s really like an instant Great Recession.

Northern Trust Chief Economist Carl Tannenbaum said if half the workers in hard-hit industries, such as restaurants, retail and personal services, are laid off the unemployment rate could rise 10 percentage points, to more than 13%. That is well above the post World War II record high of 10.8% at the end of the 1981-82 recession.

Yesterday I reported Retail Grinds to a Halt as 47,000 Stores Close

Walmart and Amazon are hiring, but must most industries are hit hard.

US Output Drops at Fastest Rate in a Decade

Markit reports US Output Drops at Fastest Rate in a Decade

Nothing is Working Now: What's Next for America?

For a 20-point discussion of how things are likely to unfold, please see Nothing is Working Now: What's Next for America?