The UK's Office for National Statistics (ONS) will release the Consumer Price Index (CPI) data for September at 0600 GMT on Wednesday, October 20. Investors expect the CPI to stay unchanged on a yearly basis at 3.2% while seeing the Core CPI, which excludes the volatile food and energy prices, edging lower to 3% from 3.1%.

The Producer Price Index (PPI) and the Retail Price Index (RPI) figures will also be featured in the ONS' publication but investors will remain focused on the CPI reading.

While speaking at an event organized by the Group of 30 consultative group, Bank of England Governor Andrew Bailey said that he believes the recent jump in inflation was temporary. However, Bailey also acknowledged that there was a risk the sharp increase in energy prices would likely lift inflation expectations.

Following these remarks, UK gilt yields shot higher, reflecting the heightened probability of the BoE opting out for a rate increase before the end of the year. Currently, the CME Group's BoEWatch shows that there is a 70% chance of a BoE rate hike by the December 16 meeting. Moreover, the probability of a 25 bps hike in November jumped to 59% on Monday from 31% a week ago but returned to 32% on Tuesday with the 2-year gilt yield consolidating Monday's rally. 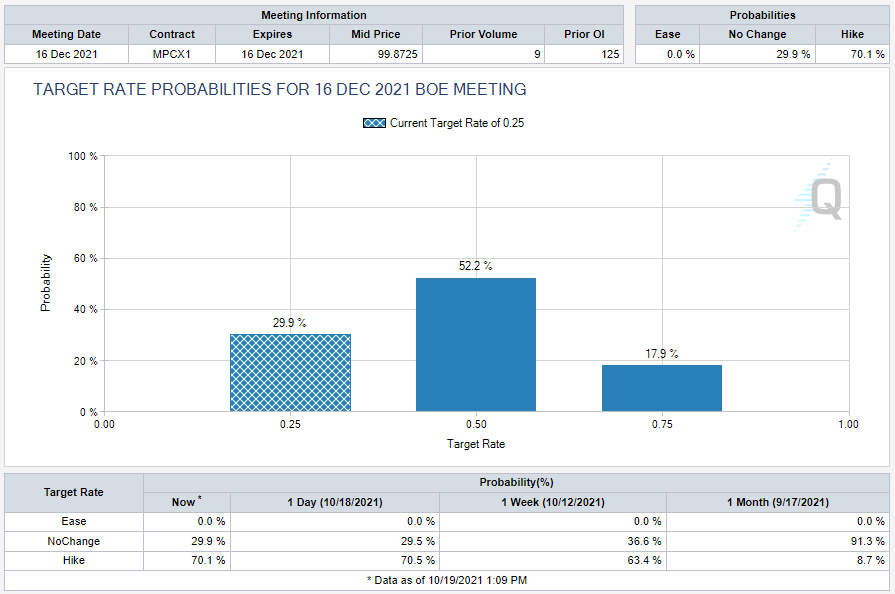 If the CPI arrives higher than the market consensus, investors could see this development as a trigger that would pave the way for the BoE to act as soon as November. In that scenario, the British pound could gather strength against its major rivals. The biggest impact is likely to be seen on the EUR/GBP and the GBP/JPY pairs due to the European Central Bank and the Bank of Japan's dovish stances. It wouldn't be surprising to see another leg higher in the GBP/USD pair as well but the dollar could show some resilience if US Treasury bond yields turn north.

On the other hand, market participants could decide to wait for the next inflation report before continuing to price in rate hike expectations on a softer-than-expected inflation reading and book their profits. In that case, the GBP could come under strong bearish pressure.

On the daily chart, the Relative Strength Index (RSI) indicator continues to edge higher while staying below 70, suggesting that there is more room on the upside before GBP/USD becomes technically overbought. Currently, the pair is trading above the 100-day SMA, which is currently located at 1.3800, and a daily close above that level is likely to encourage buyers.