Cable nudged out a 2-day high at 1.4186, which reflected broader Greenback softness, which has been a consequence of the tip lower in US Treasury yields. The lift has returned the pair back towards recent range highs. The Pound yesterday outperformed, rising, for instance, by nearly 0.5% from the 9-day low it saw against the Euro while rallying out of the nine-day low it saw versus the Yen. The UK currency remains the second strongest performing of the G10+ currencies on the year so far.

Currently, Cable has turned lower at 1.4148, following mixed economic reports this morning. Even though UK monthly GDP strengthened in April, albeit a tad less than expected,  manufacturing, production and construction spoiled the party, while a sharp rebound in services saved the day. Overall GDP expanded 2.3% in April, a tad below consensus expectations, but up from 2.1% m/m in March. The three-month rate held steady at 1.5%, which sets the economy on the road for a strong rebound in overall economic activity in the second quarter of the year. With virus restrictions gradually being eased over the last months as vaccinations progressed, the data naturally remains uneven, but survey data suggests that growth is broadening and strengthening now. 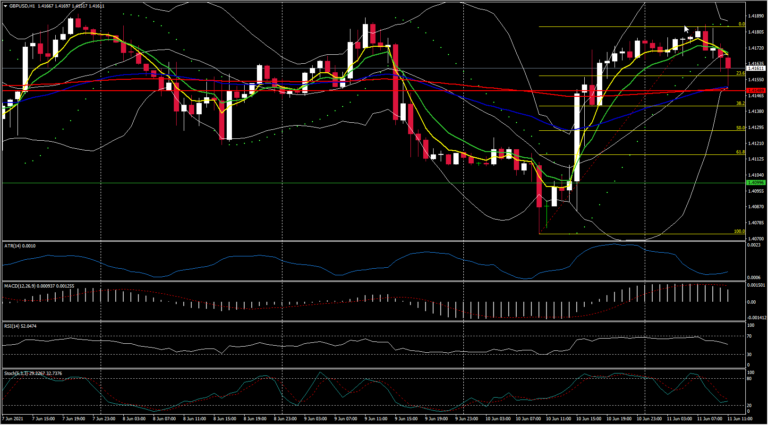 The prognosis for the months ahead in the UK is looking good. While there has been a creep higher in new Covid cases in the UK, which has caused the prime minister to publicly ruminate that the fourth and final phase of the government’s “roadmap” to reopening, scheduled for June 21, might be delayed, there are good grounds to expect this won’t develop into a full-blown wave. The spread, which is being driven by the Indian variant, is mostly among younger, unvaccinated people, while the vaccinated majority is proving to be resistant.

Despite today’s reversal and the 1-month ranging market, the GBP  sustains an overall bullish outlook. The UK’s main equity indices are replete with globally-focused cyclical stocks, which continue to trade at a discount relative to global peers, and which should benefit as major economies rebound at a time when investors are searching for value. 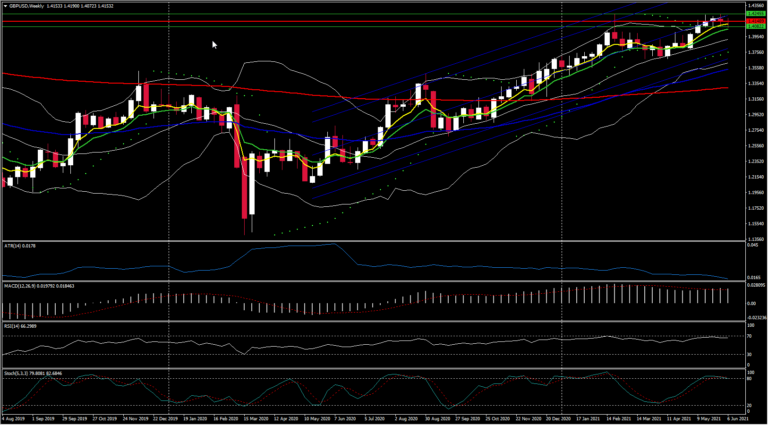 GBPUSD is holding higher above the 50- and 200-day EMA and within an upwards channel since May 2020. However, the market has been trading in a horizontal trajectory for the past 4 weeks within the upper boundary of the 1.4245 Resistance and the lower immediate boundary of the 1.4080 Support. The daily RSI is sloping sideways but sustaining a move above the 50 levels, while the stochastic is heading upwards after the bullish cross on June 7th of the %K and %D lines. MACD lines held well above zero but with MACD turning below the signal line, presenting along with RSI an overall bullish outlook but with increasing bearish bias as well.

In conclusion, GBPUSD is neutral in the near term but is looking neutral to bullish in the medium-term outlook.

Nevertheless, from the bank’s perspective, markets will be on a heightened state of alert to incoming policy signalling from BoE MPC members after Vlieghe said recently that an “early” rate hike was possible, provided there was a smooth transition out of the furlough. The furlough scheme ends on September 30, so Vlieghe’s remarks suggest that big decisions on the policy will be made after this. Until there is a proof then that the labour market can cope with the withdrawal of support measures policymakers are expected to continue to downplay recent spikes in price pressures as being transitory.