Friday, January 20, 2017 will mark the historic inauguration of what promises to be a highly unconventional US presidential administration. On that day, President-elect Donald Trump will be sworn-in as the 45th President of the United States, thrusting into the forefront all of the ambiguous anticipation over the future trajectory of the nation that has built-up in the past few months. While many Americans remain bitterly divided over the prospects for the new US government under Trump, however, the financial markets have spoken rather loudly and clearly since the real estate billionaire was elected in early November.

Market reverberations in the aftermath of the November election have perhaps been most pronounced in the US equity markets and the US dollar, both of which found good reasons to rally on high expectations sparked by Trump’s ambitious economic promises. At the same time, the price of gold entered into a sharp dive as stocks and the dollar rallied, but has recovered much of those losses since the beginning of the new year.

US equity markets, especially, have been enamored with Trump since his election victory, as they have been buoyed to progressively higher all-time highs by bold promises of US economic growth, boosted fiscal spending, lower corporate taxes, and financial deregulation. Meanwhile, the dollar also rose sharply and gold plunged initially on increased interest rate expectations that have been driven in large part by Trump’s well-publicized promises.

Trump’s Promises and their Market Effects

This report will delve into some of those key market-moving promises made by Donald Trump in the extended run-up to his Friday inauguration, and then provide an outlook for potential market implications and challenges after Inauguration Day. 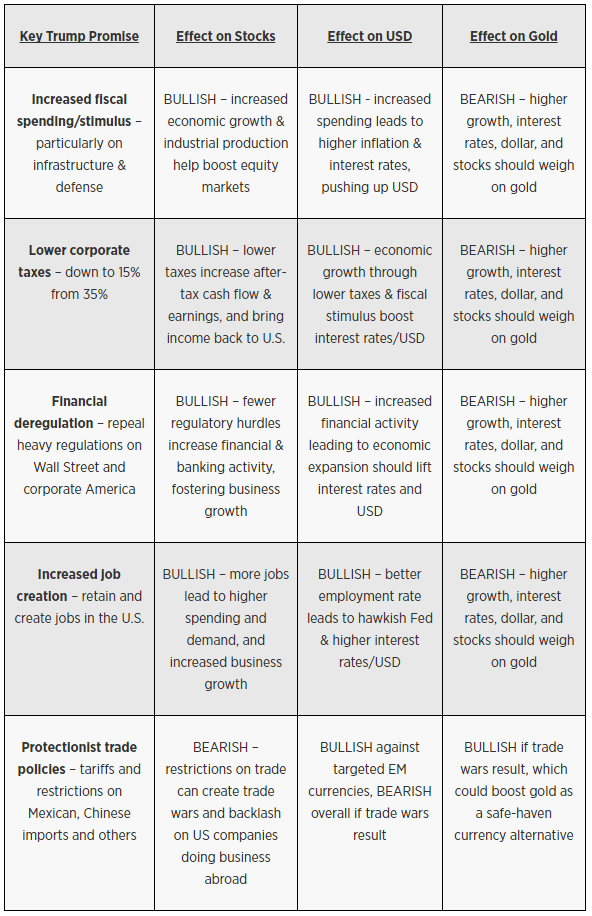 While Donald Trump has made many other assurances besides the ones noted above, these key promises have been, and should continue to be, the most salient issues potentially moving markets going forward.

As the sharp market moves for the past two months since the November election have been fueled by little more than the abovementioned promises along with a very healthy dose of optimistic anticipation, will the actual inauguration of this brand-new administration bring a reality-check to the markets?

This could very well be the case. From Inauguration Day onwards, the many growth-inducing promises that Donald Trump has made, which have helped equity markets surge to sharply higher all-time highs, will begin to matter much less than the actual actions taken to fulfill those promises.

Markets are typically prone to rise on lofty expectations and fall on less-than-lofty realities. If the realities under President Trump fail to match expectations with regard to fiscal spending, lower taxes, financial deregulation, or other market-related issues, the many investors who have fully bought-in to the “Trump Trade” could potentially be in for a rude awakening.

What makes the outlook for equity markets and the US dollar potentially even more vulnerable to downside risk after inauguration is that much of the soaring market expectations for the incoming Trump Administration have already been pricing-in to the rallying stock market and US dollar for the past two months. The sharp Trump Rally has essentially made the assumption that these expectations will be fulfilled. If any challenges to fulfilling these expectations arise, which should be inevitable in any brand-new administration, the likelihood of market pullbacks, corrections or reversals increase substantially.

The potential challenges for the incoming Trump Administration and the financial markets after inauguration are many. Most of these challenges relate to the new government’s ability to set in motion the actions needed to fulfill Trump’s promises, and the potentially resulting market implications.

Clearly, there are many valid reasons for the extended Trump Rally recently seen in stocks and the dollar. Most of these reasons are tied to expectations of a business-friendly, pro-growth president in Donald Trump. While these expectations may ultimately be fulfilled, many near-term challenges and obstacles stand in the way of their fulfillment. As a result, the weeks and months after inauguration are very likely to bring significantly increased market volatility – which has been persistently low of late – as the incoming administration is thrust into its new and unfamiliar role. This volatility could indeed disrupt the strongly trending moves seen post-election and pre-inauguration, and should result in a return to substantially wider two-sided swings in equities, currencies, and commodities.

USD/JPY continues to trade in the red as the rate cut by China has failed to bring cheer to the equity markets. China's rate cut and liquidity infusion have failed to put a bid under the risky assets. The Anti-risk Yen remains better bid and is keeping USD/JPY on the defensive.

With the US dollar again attracting haven bids on coronavirus pandemic fears, the AUD/USD pair is feeling the pull of gravity on 0.6100 in Asia. Global markets continue to struggle as the virus outbreak in the US worsened over the weekend.

Gold is entrenched in the negative territory in Asia as the US dollar, the shiny metal's biggest nemesis, is benefitting from the renewed risk aversion in the equity markets.    China's reverse repo rate cut fails to restore risk sentiment and put a bid under the shiny metal.

While following a short-term falling trend line resistance, WTI drops to $22.000 amid the early Monday. In doing so, the energy benchmark remains near multi-year low amid the bearish MACD. $20.00 becomes the key for sellers ahead of targeting the three-week-old descending trend line. 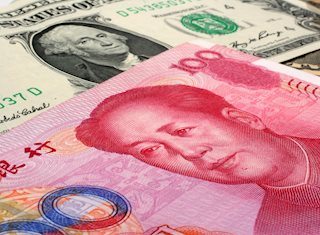