Coronavirus, the topic du jour. It is still the major threat for the global health and economy. But we should not forget about other geopolitical and economic developments. What do they imply for the gold market?

The number of cases of coronavirus reported by the WHO have increased from 45,171 cases and 1,115 deaths by February 12 to 51,867 cases and 1,669 deaths by February 16, 2020. However, the number of new cases is slowing down, which suggests that the epidemic could reach a turning point within weeks. This is of key importance not only for the global health but also for the global economy, as the sooner the epidemic is over, the quicker China's economy will recover. As a reminder, the quarantines of the whole cities like Wuhan and other compulsory measures disrupted the supply chains and hampered the Chinese economy.

However, gold bulls should not count on the coronavirus to dramatically hit the long-term economic potential of China. The epidemic will cause only a short-term slowdown, but it should not decrease the long-term economic growth. Investors should remember that the epidemic will be contained eventually and that geopolitical events and external shocks have only temporary impact the gold prices.

In the last few editions of the Fundamental Gold Report, I focused on the coronavirus outbreak, the major threat for the global health and economy. But don't forget about other important developments!

First, the CPI rose 0.1 percent in January, after increasing 0.2 percent in December, marking the smallest increase in four months. The analysts expected stronger move. However, the annual inflation rate moved from 2.3 percent in December 2019 to 2.5 percent, the highest level since October 2018. The core CPI, which excludes food and energy prices, rose 0.2 percent on a monthly basis and 2.3 percent on an annual basis, the same increase as reported in the previous 3 months, as the chart below shows. 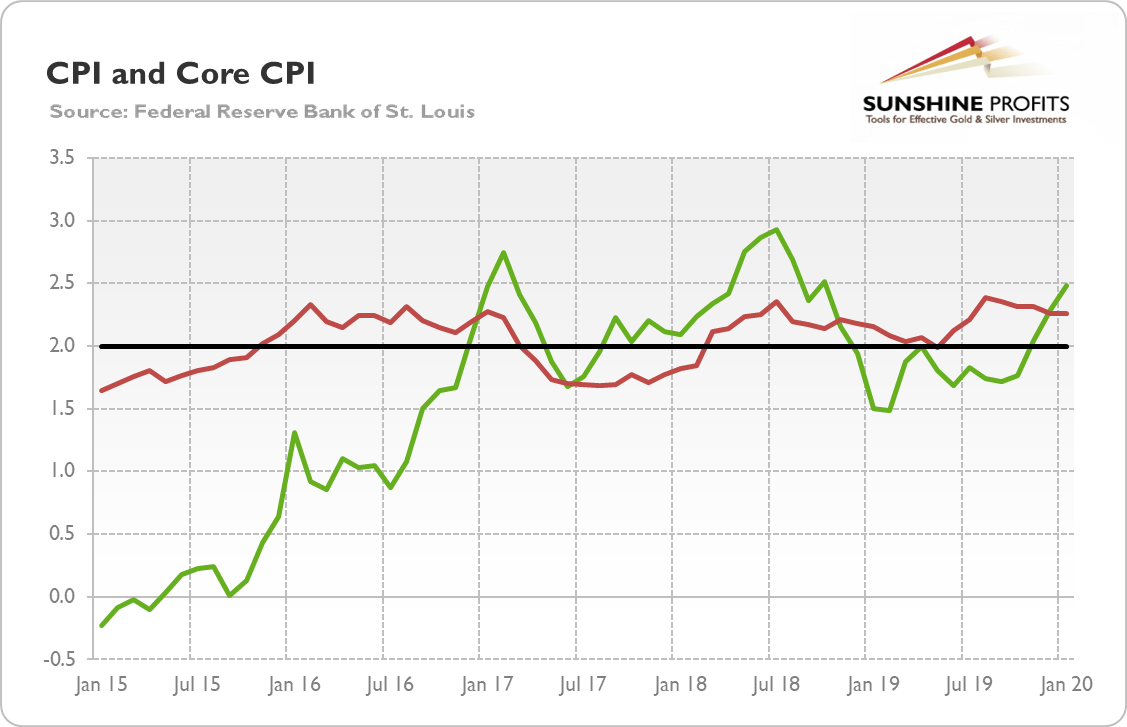 Although inflation edged up in January, it remains subdued. It means that the Fed is unlikely to raise the federal funds rate in the nearest future, especially now, when the economic damage caused by the coronavirus is unknown yet. Low inflation decreases the gold's appeal as inflation hedge, but it also implies that the Fed is likely to remain dovish, which is positive for gold prices.

Second, on Friday, the Federal Reserve reported that industrial production decreased 0.3 percent in January, marking the fourth decline in the past five months. It means that the industrial sector remains in the recessionary zone. However, the decrease mainly reflected unseasonably warm weather that held down the output of utilities and a significant slowdown in civilian aircraft production, as Boeing completely suspended the 737 MAX production after two deadly crashes in 2019. So, while the total manufacturing index declined 0.1 percent, it rose 0.3 percent, when excluding civilian aircraft. Moreover, the Manufacturing ISM index registered 50.9 percent in January, returning to expansion territory for the first time since July 2019. It offers some hope that the industrial sector will revive later this year. Of course, it would be better for gold if industrial recession not only remains with us but also spreads to other sectors of the economy.

Because of the coronavirus, I haven't yet analyzed Trump's acquittal in his recent impeachment trial. In February, the Republican-led Senate acquitted the President of abuse of power and obstruction of Congress, ending the impeachment saga.

What's next? Well, some analysts fear that Trump's victory could embolden him to further expand executive power while avoiding accountability. President has already fired a few officials who testified against him in the impeachment inquiry.

Trump's acquittal should also strengthen the President. Indeed, after the historic vote, Trump had the highest approval rating of his presidency – 49 percent in a Gallup tracking poll, which increases his chances to win the election in November. As Trump implies the status quo, his reelection should not impact the gold prices significantly. For the yellow metal, Sanders or Warren, with their radically progressive proposals, should be much better.