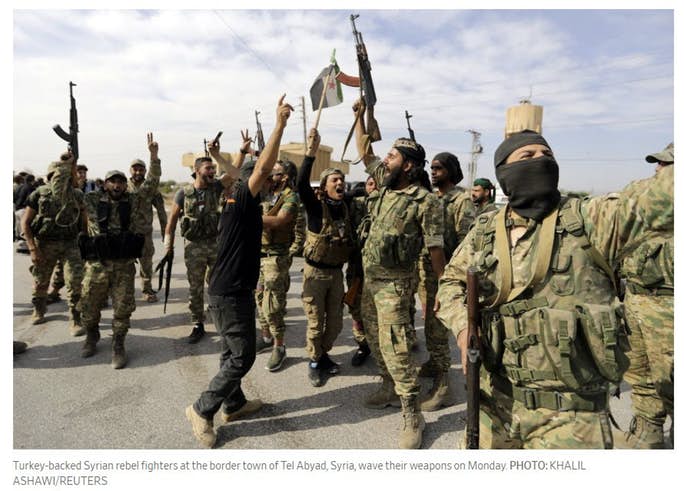 Tensions in Turkey keep rising. In response to US abandonment of Kurdish rebels in Northern Syria, the Kurds entered a pact with Syria to stave of a bloodbath at the hands of Turkey.

The invasion by Turkey went further into Syria than Turkey claimed it would, so Trump Responded with Steel Tariffs and threats of shutting of US dollar transactions for Turkey.

“Turkey’s military offensive is endangering civilians, and threatening peace, security, and stability in the region,” Mr. Trump said. “I have been perfectly clear with President [Recep Tayyip] Erdogan: Turkey’s action is precipitating a humanitarian crisis and setting conditions for possible war crimes.”

The administration’s sanctions plans are unfolding as pressure gathers on Capitol Hill for sterner action to punish Turkey. House Speaker Nancy Pelosi said she had spoken with Sen. Lindsey Graham (R., S.C.) about putting together a bipartisan, bicameral sanctions package that is stronger than what the White House is considering.

Treasury Secretary Steven Mnuchin said earlier in the day that his office was presenting Mr. Trump with retaliatory options against Turkey. “It is a complicated situation,” Mr. Mnuchin said, when asked if Turkey has moved further into Syria than initially conveyed to U.S. forces.

“On the one hand we have Turkey, who is a full member of NATO and an ally with us, fighting the Kurds who have helped us on ISIS,” he said, referring to the North Atlantic Treaty Organization and Islamic State. “And obviously we are very concerned about the humanitarian issues and we’re monitoring it very carefully.”

Another point of tension was Ankara’s purchase of Russia’s S-400 missile-defense system. Weapons experts say that system could compromise U.S. and NATO security by potentially giving Russia access to sensitive military information. Mr. Trump has in the past told his advisers he wanted to avoid punishing Turkey over the Russian missile-defense system.

One day he was inviting Mr. Erdogan to visit the White House; the next he was threatening to “totally destroy and obliterate” Turkey’s economy if it crossed a line that he never defined.

Rarely has a presidential decision resulted so immediately in what his own party leaders have described as disastrous consequences for American allies and interests. How this decision happened — springing from an “off-script moment” with President Recep Tayyip Erdogan of Turkey, in the generous description of a senior American diplomat — probably will be debated for years by historians, Middle East experts and conspiracy theorists.

But this much already is clear: Mr. Trump ignored months of warnings from his advisers about what calamities likely would ensue if he followed his instincts to pull back from Syria and abandon America’s longtime allies, the Kurds. He had no Plan B, other than to leave. The only surprise is how swiftly it all collapsed around the president and his depleted, inexperienced foreign policy team.

Over the weekend, State and Energy Department officials were quietly reviewing plans for evacuating roughly 50 tactical nuclear weapons that the United States had long stored, under American control, at Incirlik Air Base in Turkey, about 250 miles from the Syrian border, according to two American officials.

With that Op-Ed, the NY times writer supports continual US troops forever, where they don't belong.

Erdogan Threatens to Release Millions of Migrants Into Europe

"Hey European Union. If you attempt to label our operations as an invasion, then it's simple: We will open out borders and send 3.6 million refugees your way," said Erdogan.

Indeed. What else could it possibly be?

Yes, Take the Missiles Out

Take the damn missiles out.

They never should have been in Turkey in the first place.

Some allies we have.

This is all part of the asinine sponsorship of the failed policy "The enemy of my enemy is my friend".

The NYT writer does have one thing right, albeit without saying so.

Trump is a Hypocrite

Trump pisses and moans, correctly so, that Syria is 7,000 miles away.

The fact of the matter is Saudi Arabia is even further. Yet check out these headlines. 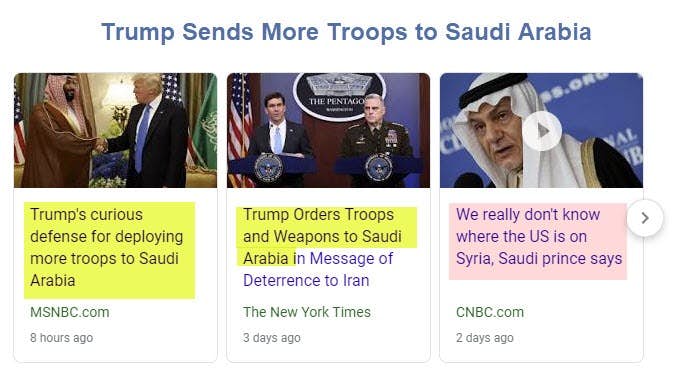 Hell, not even Saudi Arabia knows where Trump stands.

I will tell you: Nowhere.

Trump has gone from inviting his buddy Erdogan to the White House to threatening to “totally destroy and obliterate” Turkey’s economy, in short order.

Feel free to disagree. But if you support Trump's logic then you look as hypocritical as he does.

Trump is nothing but a playground bully and a monstrous hypocrite at that.

Turkey is icing on the cake. ​

Bring the troops home, all of them: From Syria, Afghanistan, Germany, Japan, Turkey, Saudi Arabia, everywhere!

The US cannot afford to be the world's policeman, nor should it try even if we could.

Out foreign policy has been nothing but disaster after disaster.