In November, Lagarde delivered her first speech as the ECB President. Will she follow in Draghi’s footsteps? But what should gold investors expect from her?

Recently, we have focused on the U.S. economy and the recession in its manufacturing sector. But let’s not forget about Europe, whose economy is even weaker, and the monetary policy even more absurd. Two weeks ago, Christine Lagarde delivered her first policy speech as President of the European Central Bank.

First of all, Lagarde essentially confirmed the ECB’s dovish stance. The financial markets expect the easy monetary stance to last for years and Lagarde did nothing to change these expectations. She said:

The ECB’s accommodative policy stance has been a key driver of domestic demand during the recovery, and that stance remains in place. Monetary policy will continue to support the economy and respond to future risks in line with our price stability mandate.

Second, just as Draghi, Lagarde will keep the pressure on governments to ease their fiscal stance, supporting the constrained monetary policy. “It is clear that monetary policy could achieve its goal faster and with fewer side effects if other policies were supporting growth alongside it,” she said. It’s true that the EU definitely needs structural reforms. But  Lagarde rather had in mind more budget spending and easier fiscal policy. And this will not be very helpful.

Third, following the Fed, the ECB will start a strategic review of its monetary policy framework in the near future. This is great, as it’s always a good idea to review its strategy, but unfortunately the ECB is unlikely to change its unhealthy fascination with 2-percent inflation rate. Actually, investors can expect new monetary stimuli. The ECB will always find justification. Next to low inflation, there is always a… global warming.

And this is not a joke. Lagarde is really pushing for climate change to be part of the ECB’s strategic review in an attempt to make the environment an essential part of monetary policymaking. Pssst, Christine, wanna a free advice? Climate change is an important and debatable issue, but not for central banks!

Recently, Lagarde has delivered her first speech as the ECB President. She has been tight-lipped on monetary aspects, so investors have to until the next ECB meeting to get some clues on her monetary policy views. But we already know that the ECB under Lagarde is unlikely to abandon its ultra dovish stance, at least unless inflation soars significantly. If anything, we can expect even more stimulus, as the ECB will have to react to not only “subdued inflation”, “deflationary shock”, but also to “climate crisis”. No European mutation of Green New Deal will finance itself!

What does it all mean for gold? The permanently easy monetary policy stance could be seen as supportive for gold, which loves the environment of low and especially negative real interest rates. But eternally dovish ECB means also weak euro. And weak common currency implies stronger U.S. dollar, the greatest rival of gold. 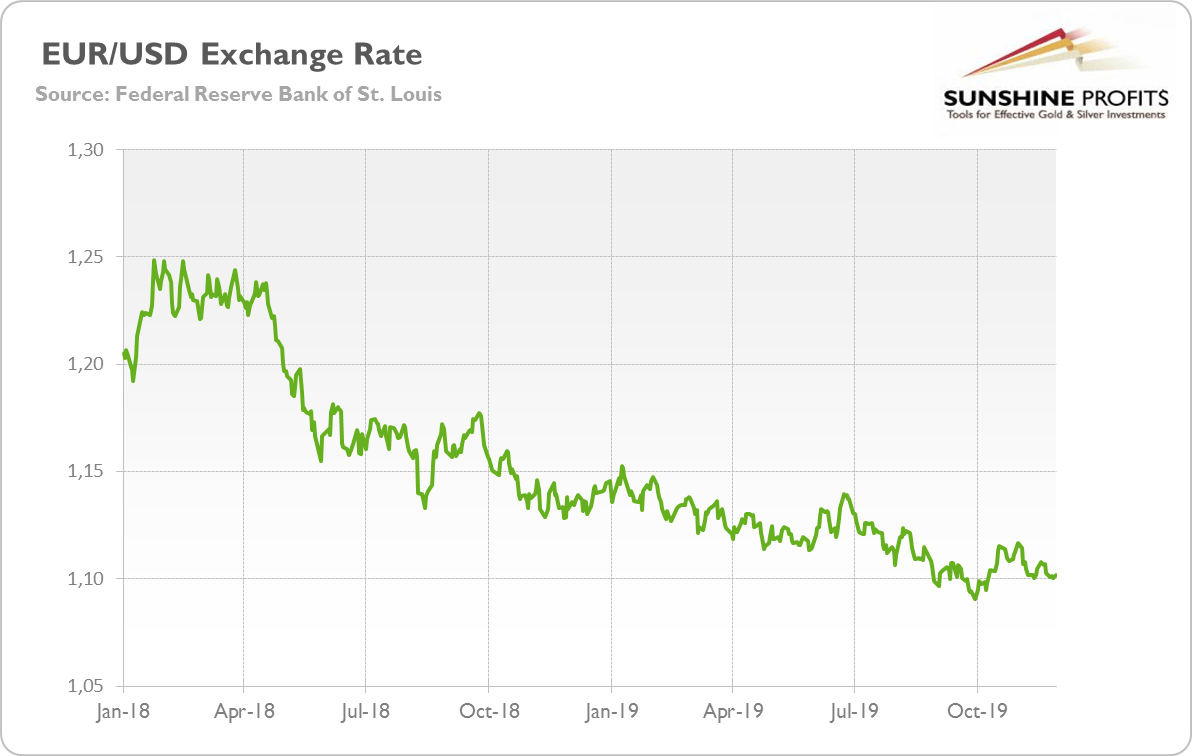 As the chart above shows, the EUR/USD exchange rate has been falling since January 2018. It confirms that the recent ultra dovish stance of the ECB has not been supportive to the euro. Hence, Lagarde may not give gold bulls reason for joy. We have doves in the U.S. and even more dovish doves in Europe, while the best combo for the yellow metal would be ultra doves at the Fed and ultra hawks at the ECB.

EUR/USD retreats below 1.0900 amid risk aversion

EUR/USD has declined below 1.0900 after having spent the first half of the day fluctuating in a tight range near that level. The risk-averse market environment, as reflected by falling US stocks, helps the US Dollar gather strength and weighs on the pair in the American session.

GBP/USD came under modest bearish pressure and declined below 1.2400 in the second half of the day on Monday. The cautious market mood ahead of this week's high-impact events seems to be supporting the US Dollar and capping the pair's upside.