For homeowners, garbage day is never pleasant. Getting the trash together takes some doing (and during the summer, nose plugs don’t hurt). There follows an argument among children over whose turn it is to take the bins out to the curb, which usually ends with a parent performing the chore to get it over with.

But it could be worse. In most areas, trucks arranged by local governments come through weekly to collect the detritus and take it to a dump. Imagine what the process would be like if pickup was provided only monthly, or not at all.

Yet this is the prospect faced by many U.S. communities for a range of public services. Poor fiscal health at the state and local levels clouds their economic futures, and ours; the situation promises to get worse as demographics march on. And if recession returns, some states may find themselves in very serious difficulty. 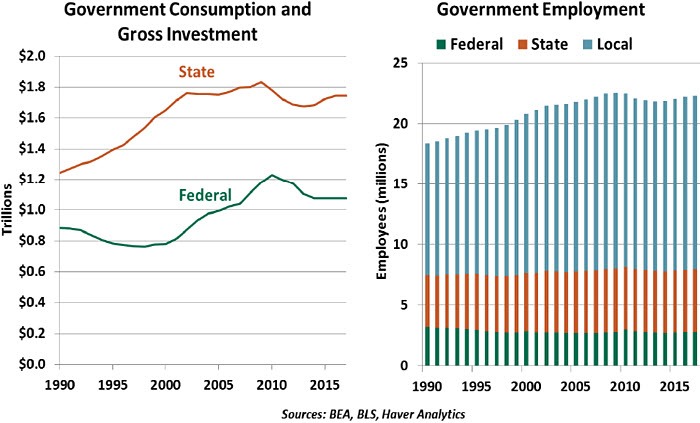 Sustaining public payrolls and expenditures requires money. Relative to the federal government, states and municipalities have limited sources of revenue:

All levels of government can issue debt. More than $3 trillion in state and municipal debt is currently outstanding. While local governments have reliable income streams to service debt, they must keep their budgets close to balanced. States do not issue currency and therefore cannot run printing presses to manage their debt burdens.

From that base of income, states and municipalities provide a broad set of services. In healthcare, local governments manage Medicaid programs. Local governments provide education beginning with kindergarten and extending through public universities. They are therefore critical to the formation of human capital in the United States. 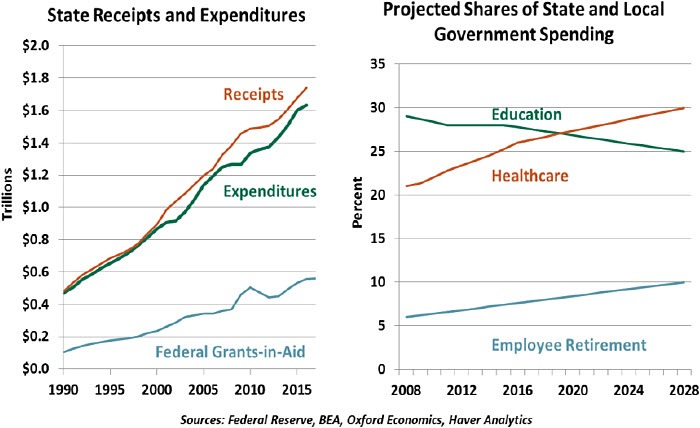 Under the best of circumstances, our local governments are stretched. They are now under even greater duress as the cost of healthcare rises and decades of pension obligations are coming due. Research by Morningstar found that 21 states had pension funding ratios worryingly below 70%.

State and local governments have mounting financial obligations and no reductions in demand for their services. How can they maintain solvency?

Default is a growing concern. Until recently, government debt was considered very safe, with historians looking back to the Great Depression to find examples of insolvency in the public sector. However, the past decade has given us the default of Puerto Rico and bankruptcy declarations in Detroit, Michigan and Stockton, California. Municipal defaults remain rare but possible.

Overburdened state and local governments are a risk to both their residents and their investors. In the past year, Moody’s has issued debt downgrades from California to Connecticut, with Illinois teetering on the brink of a junk bond rating.

To avoid that fate, cost reductions are being stressed. There are some promising angles: neighboring cities or overlapping levels of government may merge in order to reduce administrative staff, such as the successful merger of Kansas City, Kansas, with Wyandotte County. On the other hand, many solutions designed to resolve issues of pension funding face immense political opposition. Cutting back on education seems short-sighted, as human capital is a key to economic success. The recent wave of teacher’s strikes is a clear sign of what’s ahead on this front.

Given the importance of state and local conditions to the national economic picture, failure to solve fiscal problems at this level would be damaging to the whole country. If the situation isn’t addressed soon, it will leave a mess for our children that will be almost impossible to clean up. Even if they all pitch in.

When a country has trade and budget deficits as large as those run by the United States, their currencies tend to come under pressure. To pay for excess imports, the local currency must be sold and converted to others, which lowers exchange rates. Devaluation can also entice otherwise hesitant foreign investors to purchase sovereign debt.

The U.S. dollar has yet to endure this fate. In fact, even as news about debt and deficits has worsened over the past several weeks, the dollar has unexpectedly gained strength. This turn of events has created challenges for other world markets (see next segment).

One of the subtle translation mechanisms involved in the contagion is the “carry trade,” in which investors borrow U.S. dollars and use the funds to purchase assets in markets with higher interest rates. For example, borrowing short-term in the U.S. costs just over 2% today; the dollars can then be used to purchase Argentine pesos and invest in Argentine 10-year bonds yielding 18%.

The combination is not without risks: if interest rates change, or if the value of the dollar increases, returns are diminished. Under these circumstances, capital can depart just as quickly as it arrived, leaving the recipient short. This has been an especially powerful force recently.

It does not appear that U.S. interest rate increases (and prospects for more of them) are at fault. As shown below in the left-hand panel, capital flows to emerging markets often increase when the Federal Reserve is tightening rates. But there is a clear, negative relationship between the dollar’s value and returns from carry trades. 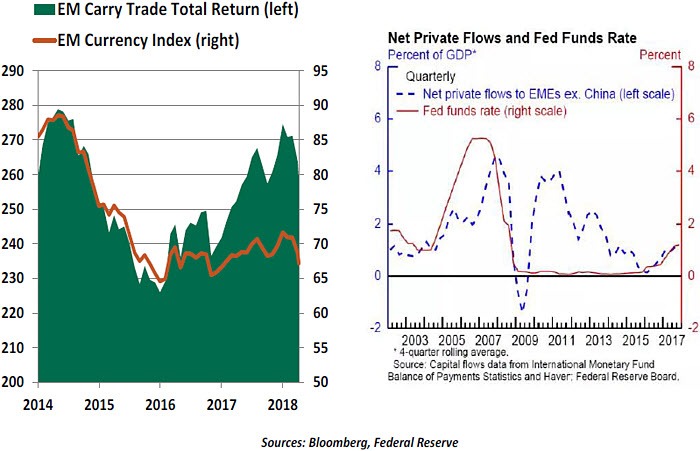 The dollar’s ability to defy economic gravity is due in no small part to its role as the world’s sole reserve currency, which (for now) remains unquestioned. Analysts still expect the dollar to lose a little of its edge as the year progresses. But for now, carry traders and the markets they use are in retreat.

Emerging Markets (EMs) entered the year riding the waves of healthy global growth, improving commodity prices and a weak U.S. dollar. As discussed above, however, recent market conditions have put several EM currencies, stock indices and credit markets under pressure. This has brought back memories of the five-year-old “taper tantrum” and may prompt an end to the cycle of cutting interest rates in some EMs.

Both Argentina and Turkey have slipped at a worrying rate from being investors’ darlings to high-risk markets. In a little over a month, the Argentine peso (ARS) has depreciated by 15% and the Turkish lira (TRY) by 9.3%. Both are near their historical lows against the U.S. dollar.

Both the Argentine and Turkish central banks have moved to shore up their currencies. In a swift response to a rout in the peso, the Banco Central de la República Argentina (BCRA) increased its policy interest rates by an unprecedented 1,275 basis points to 40% in just eight days. Argentine president Mauricio Macri also approached the International Monetary Fund this week to seek a “financial line of support.”

Compared to Argentina, the response from Turkish policymakers has been relatively modest. The Central Bank of the Republic of Turkey (CBRT) raised interest rates by only 75 basis points in a single hike even as the TRY hit record lows against the dollar. With an election upcoming, the government is reluctant to take steps that might diminish its standing in the polls. Too many economic decisions around the world are scored using political points, not basis points.

Though the current volatility in these two countries is due largely to external factors, it has brought lingering domestic problems to the fore. Soaring inflation (24.6% in Argentina and 11.1% in Turkey last year), out-of-control government finances and heavy reliance on foreign capital are common concerns. These conditions make nations vulnerable to shifts in investor sentiment during periods of rising borrowing costs and currency movements.

The low global interest rate environment over the last few years has led to higher debt accumulation in many EMs, much of it denominated in foreign currencies like the dollar. Lack of sufficient foreign exchange reserves creates further concerns over the ability of companies within these countries to repay dollar-denominated debt. 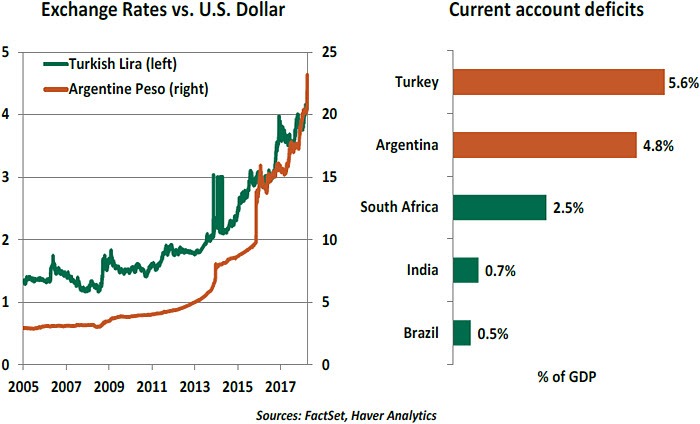 Beyond economic mismanagement, both the BCRA and the CBRT have been criticized for insufficient independence from their governments. Recent examples of these include the efforts of Turkish President Erdogan to keep credit cheap ahead of June’s snap elections, and the BCRA’s decision to loosen its inflation target. International investors place special value on the ability of monetary authorities in emerging markets to remain distant from politics. When this distance closes, the risk of capital flight increases.

The markets do not appear to have taken comfort from the drastic policy measures by the BCRA and relatively milder action by the CBRT last week. Though central bank intervention will remain an important tool to limit the damage, it is time for the respective governments to urgently address the issues of high inflation and twin deficits through reforms. Argentina and Turkey, after a year of offering high returns to investors, are at risk of becoming victims of their past follies.

The EUR/USD pair extended its slump towards 1.1760 after ECB’s Lagarde said the economic recovery in the EU is “very uncertain, uneven and incomplete.” Next relevant support at 1.1736, this month low.

Bitcoin is on its third positive consecutive session in a row on the dominance chart and points to strong market share increases. Crypto market raises doubts on price development in the short term.