It’s a big week for the financial markets with the US consumer price index (CPI) being published on Thursday.

Close to a year has passed since the Fed’s infamous announcement on the average inflation targeting (AIT) regime at the Jackson Hole conference last year, and investors are  becoming increasingly nervous about inflation.

The consensus expects a core inflation of 3.4% and a headline inflation of 4.7%. However, a higher print is very likely with fundamentals, such as wage growth and energy prices, moving upwards.

We saw a surprise last month when core inflation jumped to 3.0%, a 0.7% hike from what was expected for April.

Despite the 10-year yield touching 1.7% and the 10-year breakeven reaching 2.54% early in May, recent market movements have been more muted. The 10-year yield broke the support levels at 1.543% and 1.48% on Wednesday, adding weight to an already soft US dollar.

The DXY index, currently at $90.1, is one percentage point away from swing lows at $89.2. Technical indicators support a weak bearish trend to continue with range bound movement between $90.2 and $89.7. 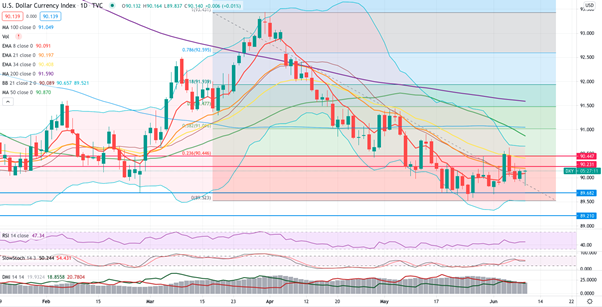 A weak dollar has also supported oil and other commodities.

Oil futures have been trending higher, touching an important resistance level of $70 on Wednesday, bringing the month-to-date price increase to 4.05%. Keep in mind too that energy prices will feed into headline CPI, which is projected to jump to 4.7% in May.

On the other hand, these softer rates and the weaker dollar did not have much of an impact on the equity markets.

From a sector perspective, the defensives were leading the way with healthcare up 0.97% and utilities 0.89%, while technology ETF XLK  that benefits from lower rates only gained 0.07 percentage points.

After a period of relative calm, the markets are likely to have an emotive reaction to this week’s CPI data.

With a higher-than-expected inflation, we might see a credit market selloff, which should push interest rates higher. The 10-year yield might snap back to resistance near 1.55%, after sliding two standard deviations below from its mean of 1.58% earlier in the week. Higher rates are likely to weigh on equities, in particular the technology-related sectors, while supporting the dollar.

Nevertheless, recent rate movements indicate that investors have accepted the Fed’s narrative about inflation being transitory or are simply waiting for the labor market to recover later this summer. September might bring the first round of clean data on labor market health with extended benefits coming to an end and schools re-opening.

If we combine this week’s CPI announcement with next week’s FOMC meeting, markets and the US dollar are bound to see plenty of movement, all thanks to inflationary pressure and expectations and the US government’s corresponding response. The Fed is expected next week to start laying out its plan to start tapering and eventually increase interest rates, a move that will add to the action likely to happen following today’s announcement.