Economists are stymied in estimating the economic consequences of the pandemic. That's going to remain the case until we know more. The FT reports the BoA top economist thinks global GDP will drop to zero this year—recession in the US and Europe, offset by China with +1.6%. Oxford Economics' chief economist says the US is already in recession and will get a 12% contraction in Q2 but bounce back for net zero by year-end. Jobs losses will be about a million. Oh, no. Job losses are going to be tens of millions. We will get the first inkling this Thursday, a bit of data that can send the stock market down all on its own.

The most impressive of the forecasts from Bridgewater—US corporate revenue could fall by $4 trillion, the amount that is "consistent with about two months of significant lockdown and a gradual recovery."

We added up the notional amounts of the rescue plans of each country and got a grand total of $2.984 trillion (excludes China and uses only $1 trillion for the US). That doesn't count any number of measures that should be included, like government purchases of equities, already happening in Japan and a possibility in the US. If the world's GDP is about $85 trillion (2018 number from Statistica), coronavirus pushback or abatement is 3.5% of the total. A similar set of calculations comes from Quartz—see the table. 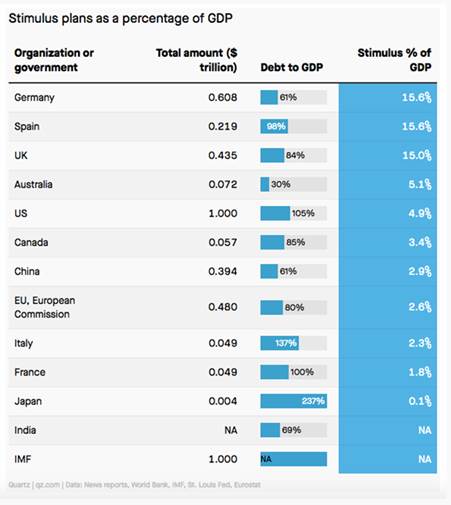 How to think about these numbers? It's not something you learn in economics class. The Black Plague destroyed the European and Middle East economies, but we don't have numbers. We know very little more about the 1918 Spanish flu pandemic. According to a St. Louis Fed paper in 2007, one of the only measured effects was a labor shortage that resulted in a rise in wages. As it happened, WW I interfered with our effort to find a GDP comparable for 1917-1920. Whatever extent GDP was driven down by the Spanish flu in the US and Europe was apparently more than compensated for by war efforts. 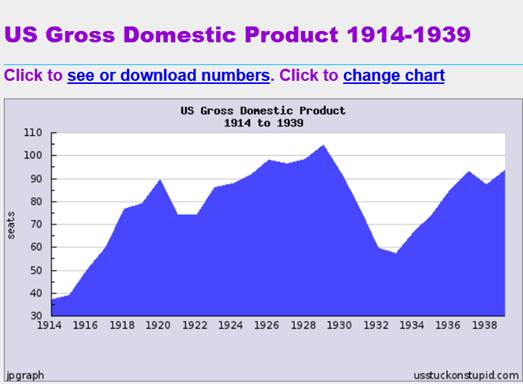 Let's say the current pandemic cuts a modest 20% off global GDP, or $17 trillion. We are spending about $3 trillion (so far), and let's say that doubles by year-end to $6 trillion. That is still only a little more than one-third of what gets lost. Sorry, but in economics you have to use assumptions (!). What if the pandemic cuts 30% off GDP, or $25.5 trillion? The $3 trillion we are spending now is about 12% of that.

Governments and central banks don't have enough money to overcome the pandemic. Well, unless they start treating it like a genuine war. WW II saw GDP rise by 8-19% pa, and a 1% drop in 1945 when defense spending went away. The implication is that if factories are converted to medical machines from whatever they make today, like Detroit shifted from cars to tanks, the economy will not suffer and can in fact grow robustly. The men who went away as soldiers might be likened to those newly unemployed... how about paying them soldier's wages?

Contributing to anxiety, cost and downfall is a crazy rise in the cost of credit. We are not alone in foreseeing defaults and bankruptcies. The banks are on their toes, too. According to the FT, "Rating agency Moody's estimates the default rate for speculative-grade companies could hit nearly 10 per cent, with energy companies particularly hard hit. That is up from 2.3 per cent a year ago, and a historical average of 4 per cent." Highly rated companies that can still sell bonds are taking expensive deals, with investment grade corporate debt yielding 4.7% on Friday, from 2.26% only two weeks ago.

In the FX market, we consider the emerging market currencies the canary in the coal mine. On Friday they rallied 4.8%, if still down on the year by almost 25%. See the chart (FT). Is this the start of something? Probably not, or not much. We are still at the beginning of the crisis. That means the dollar, already at a 3-year high, can still go higher. You might think that lack of confidence worldwide in US leadership would dent the US reputation, but Trump's mismanagement and personality flaws are not having that effect.

Trump is posturing as a wartime, take-charge leader but doesn't accept the buck stops here. He blames everyone for "his" problems, including China and Obama, needs sypcophantic praise from everyone on the stage with him, and continues to tell lies every time he appears. Criticism of Trump's leadership abilities is rampant, mostly because of his lies: the Navy hospital ships are not going to NYC and San Francisco this week, as he said. The tests available do not number 1.5 million as Trump says, but 142,000 as of Friday. Labs can't complete the testing without reagents, in short supply. Millions of masks and respirators are not available as Trump says, and hospitals are begging people to dig out their sewing machines and make them. Hospitals are already seeing patient overflow. The malaria medicine was not approved by the FDA and not shown to be useful, as Trump said, only to be contradicted one minute later by CDC chief Fauci. A reporter who asked whether Trump claiming a remedy was not giving false hope to the public was attacked personally for being a bad reporter, the kind of petulant ad hominem crap that is hardly the hallmark of presidential leadership (McCain was "not a hero").

Over the weekend, Trump said complaints he acted late are not true—he was early. False. The 3-6 week delay in the federal response has almost certainly cost lives. And to be fair, we now have FEMA and the National Guard activated. The rollout of crisis response is still being botched, but never mind—the towns, cities and states are functioning, and as this point, what they need from Washington is just money.

Tidbit 1: On Friday we found out that North Carolina Senator Burr sold his entire portfolio on Feb 13, right after saying publicly the US is well-prepared--but saying privately to a luncheon club "It is much more aggressive in its transmission than anything that we have seen in recent history ... It is probably more akin to the 1918 pandemic." He warned "companies might have to curtail their employees' travel, that schools could close and that the military might be mobilized to compensate for overwhelmed hospitals." And that was one month before those things actually happened.

AUD/USD is trading close to 0.7000, consolidating the dismal Australian wage price data-led losses. Softening wage growth data could prompt the RBA to slow down its policy tightening. The US dollar looks to extend the previous sell-off ahead of the FOMC minutes.