We have a V-shaped recovery so far, but what if the economy never does catch up to the pre-pandemic trajectory? Some gloomsters forecast a returning recession, naming every possible negative that can be found as contributing to stagnation/stagflation, including the trade deficit, the government deficit, inflation, and even the recent drop in government spending. Some include a Delta Wave 4.

We reject the gloomster point of view, based chiefly on the never-ending shopping spree of the US consumer. Yesterday’s GDP affirmed it, with personal consumption higher than forecast (11.8% vs 10.5%). The Atlanta Fed is unhappy about private capital investment, but it’s at a decent 8%. We get more detail today about personal income and spending.

As for the chief cause of the GDP undershoot, it’s attributable to supply bottlenecks, exactly as known well in advance. Domestic buyers of foreign goods are scouring the planet for goods and ships to put them in. Rebuilding supply chains is the job of more than one quarter but realistically, the world relies on the US consumer and workarounds are going to appear, if not until Q4 or later next year. That has two meanings: the US economy (aka the consumer) is okay and will lead the world out of pandemic recession. It just didn’t do it in Q2. Secondly, inflation is going to dig deeper and last longer, as Fed chief Powell suggested. This, too, is not a surprise. Why it’s not getting built into US yields is a mystery to us.

The Atlanta Fed starts reporting its GDPNow for Q3 starting today. It’s sure to name the shortfall in inventories from supply bottlenecks as a prime source of the drop in Q2. So the question becomes whether it gets fixed in Q3, not something the Atlanta Fed can comment on. Today’s personal consumption is probably a drop by 0.3%, reflecting the end of some wage subsidies, but personal spending at 0.3%. The biggie is the PCE deflator, probably 4.0% from 3.9% and the core PCE at 3.7% from 3.4%.

The situation in China is murky. At the start of the month, the Commerce Ministry said it would “scrutinize” foreign investments. Then it cracked down on big Chinese companies. Then it menaced Chinese IPO’s in the US, already being examined by US regulators. Most recently, internet companies were told to improve security measures. The government (not the Commerce Ministry) issued a statement that it will improve foreign listings. Some fringey press reports have it that Premier Xi has lost it and is scrambling to get it back, and we can’t find a definitive answer to exactly what domestic problems the crackdown was supposed to change.

What we do know is that the equity markets are rattled. The Shanghai index is down year-to-date, with the WSJ reporting “Big Chinese tech stocks lost hundreds of billions of dollars in combined market value in July, reflecting rising investor concern about how the sector will fare under a barrage of regulatory pressure from Beijing.” Bloomberg reports “… perhaps the vigor with which China’s leaders have acted shouldn’t come as such a surprise. After all, they did pledge in December to rein in the ‘disorderly expansion of capital.’ With the benefit of hindsight, it seems that was no empty threat.” Then we get a list of decisions that supposedly fit into a vision of a more stable and fair system. 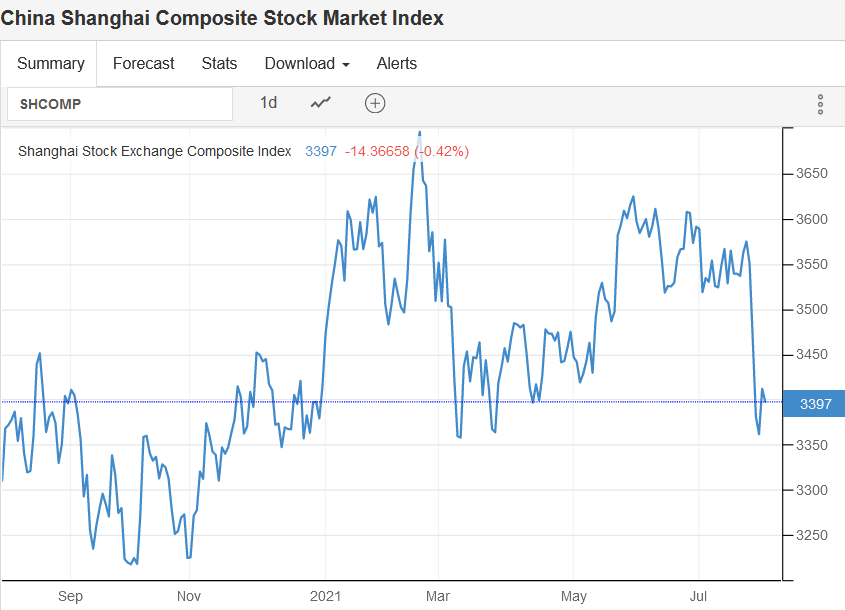 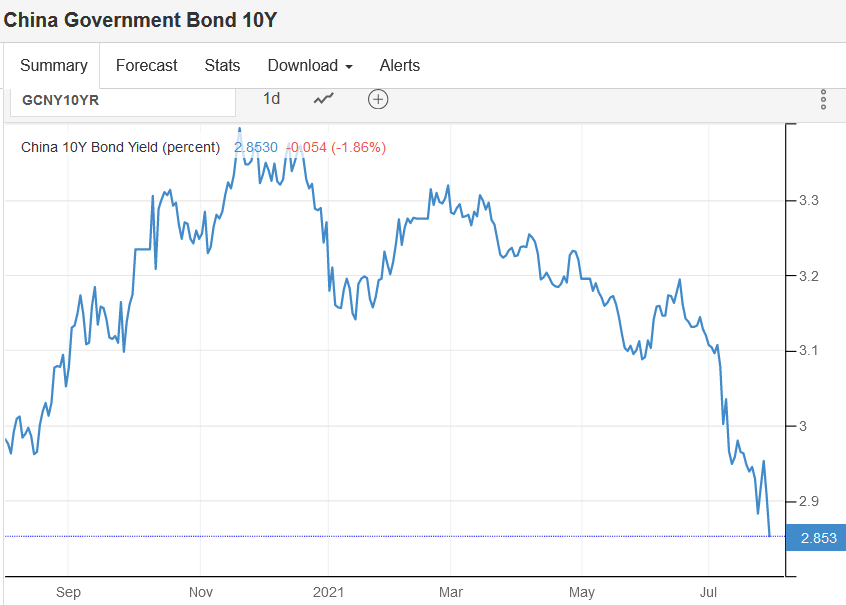 10-year Chinese notes are yielding a whole lot less, showing the flow from riskier to less-risky if you can consider the Chinese government “less risky.” This is the standard operating procedure when risk aversion is on the rise, and yet risk appetite is rising in the form of other emerging markets getting inflows, notably Mexico and Brazil, helping their currencies. China doesn’t consider itself an emerging market nor do many analysts, and yet it looks like government misjudgments in Beijing favored a switch from Chinese assets to Latin America. Can that be right? If so, it’s the opposite of contagion. 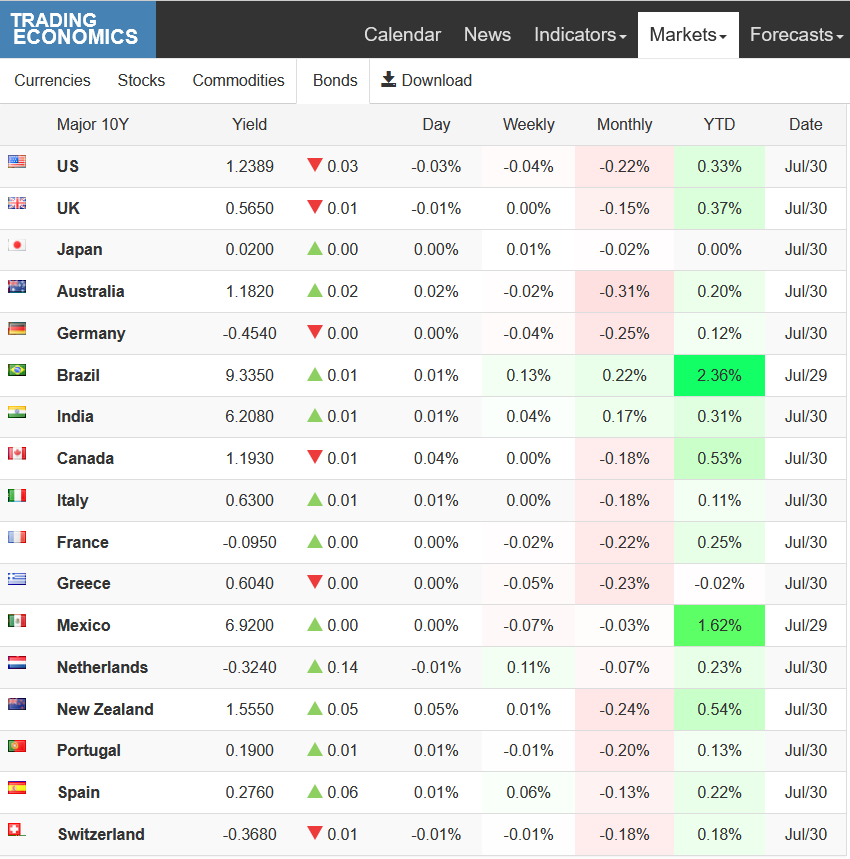 Going into the weekend, we might see some last-minute month-end position adjustments but on the whole, activity slowing to nothing by noon. That gives everyone a weekend to contemplate whether inflation is being properly factored into US rates and yields, whether supply chains can be repaired, how much new government spending will make up for the end of wage subsidies, and not least, the Delta situation. So far we are assuming the US will get smarter or get dragged into a better vaccination rate, which is essential for the conventional recovery narrative to be valid. It’s not entirely silly to see the flailing dollar as caused in part by the vaccination failure in the US, especially compared to places like the UK and even, now, the EU.

We continue to see the dollar fallback as a correction, not a change in trend. But corrections can get bigger and last longer than anyone expects. We are losing our grip on risk on/risk off, too, which is more selective than in recent years and applied retail to specific situations (like China) instead of wholesale. So, it’s a cycle but its also a roller-coaster and far more complicated than it was only a few months ago.

Tidbits: The first infrastructure bill is on course to get passed, the first major initiative from the Dems since Obamacare. The airlift of Afghan translators began today with thousands coming to the Army base a few miles up the road from us.