US stock indices bounced back Monday erasing Friday’s losses. The S&P 500 rose 2.7% to 2658.55 led by technology stocks up 4%. The Dow Jones industrial jumped 2.8% to 24202.60. The Nasdaq composite index rallied 3.3% to 7220.54. The dollar weakening accelerated: the live dollar index data show the ICE US Dollar index, a measure of the dollar’s strength against a basket of six rival currencies, fell 0.5% to 89.044. Stock indices futures indicate higher openings today.

Trade war concerns eased on reports that the US and China are conducting talks to avert a global trade war. Reports indicated US Treasury Secretary Steven Mnuchin and US trade representative Robert Lighthizer were discussing with Liu He, a Vice Premier of China, a reduction of Chinese tariffs on US automobiles, more Chinese purchases of US semiconductors and greater access to China’s financial sector by U.S. companies. Economic data were positive: the Chicago Fed national activity index for February came in at 0.88, up from 0.02 in January. 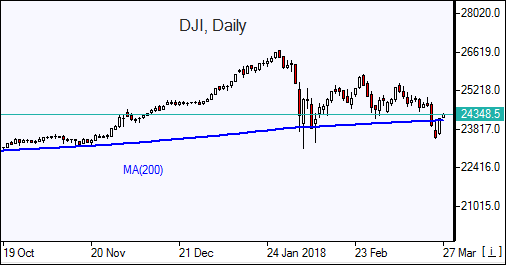 The euro rose sharply after hawkish comments by German central bank President Jens Weidmann. In his comments Weidemann, who is on the European Central Bank’s rate setting committee, supported faster end to ECB’s current stimulus measures, and mentioned that the prospect of a rate rise in 2019 remains a realistic possibility. In economic news, the final reading of France’s gross domestic product for the fourth quarter was in line with expectations at 2.5% year over year.

Asian stocks are advancing today following reports the US and China had started negotiating to improve American access to mainland markets. Nikkei jumped 2.4% to 21264 helped also by continued yen slide against the dollar. Chinese stocks are higher: the Shanghai Composite Index is up 1% and Hong Kong’s Hang Seng Index is 0.5% higher. Australia’s All Ordinaries Index is up 0.7% with Australian dollar pulling back against the US dollar.