S&P 500 indecisiveness Thursday gave way to another down day, and it doesn‘t look to be over in the least. Tech still isn‘t catching breadth enough – and that was my key condition of declaring a reprieve in the selling, if not a turnaround. Likewise, credit markets don‘t offer optimistic signs – it‘s still risk-off there, and the sharp rise in yields is putting inordinate pressure on many a tech stock. True, the behemoths aren‘t that much affected, but even a glance at semiconductors tells you that the rot is running deeper than apparent from $NYFANG.

This is part of the flight from growth into value, which we will see more of in 2022. The same for still unpleasantly high inflation which won‘t be tamed by the hawkish Fed – not even if they really allow notes and bonds to mature without reinvesting the proceeds already in Mar. The train has left the station more than 6 or 9 months ago when they were pushing the transitory thesis I had been disputing. We have truly moved into the persistently high inflation paradigm, and it would be accompanied by wage inflation and strong precious metals and commodities runs. We‘re looking at very good year in gold and silver while the turbulence in stocks is just starting, and we have quite a few percent more to go on the downside. Oil and copper are set up for great gains too.

This will be a year when monetary and fiscal policy work at odds when they contradict each other. Inflation would catch up with the economic growth in that inflation-induced economic slowdown would be a 2022 surprise. Signs of real estate softening would also appear – it‘s all about housing starts. While rates would rise (2.00% in 10-year Treasury is perfectly achievable), it won‘t catch up with inflation in the least – hello some more negative rates, and financial repression driving real assets. Rhymes perfectly with the 1970s. 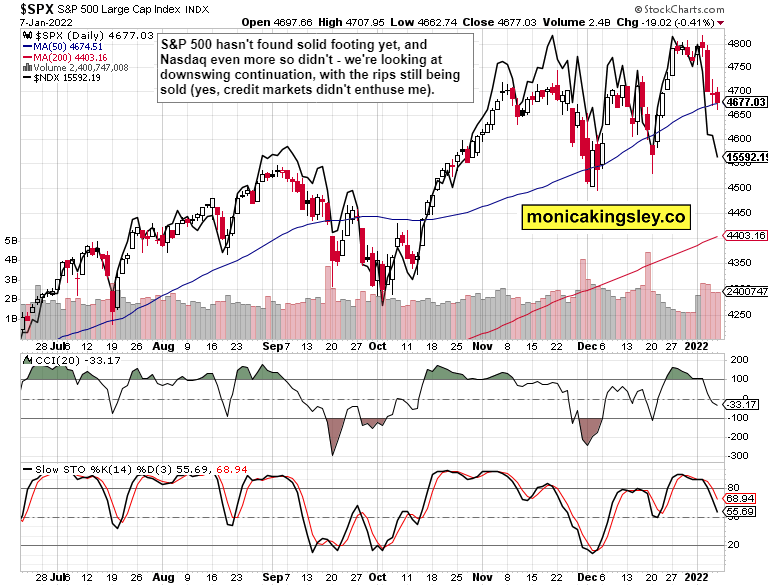 No real floor has materialized in either S&P 500 or tech. Volume didn‘t rise, the buyers aren‘t yet interested – we have to get at more oversold levels.

HYG didn‘t build on Thursday‘s advance one iota, and still looks to me melting down. While the 10-year closed at 1.76%, we aren‘t looking at such sharp bond ETF downswings – and the degree in which tech reacts next would be telling.

Gold and silver staged an orderly recovery, still tiptoeing around the hawkish Fed, whose tightening cycle would turn out shorter than they think. And sniffing that out, would be the turning point in the metals. 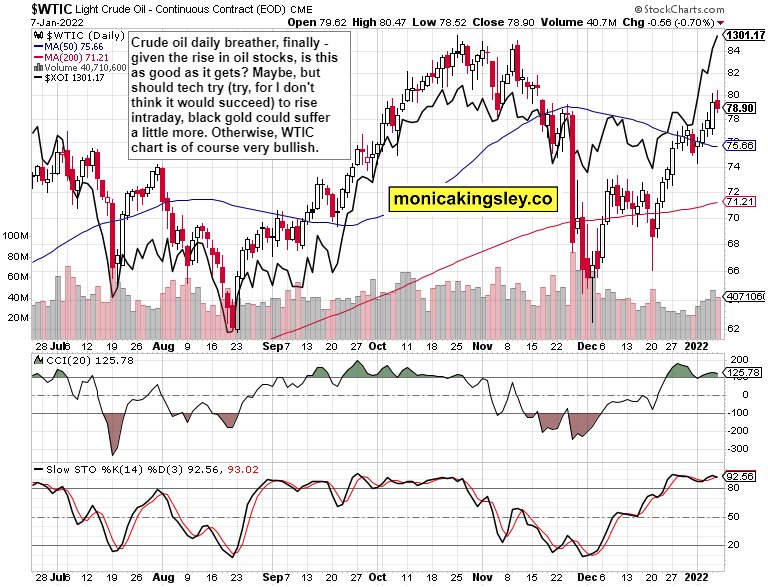 Crude oil bulls took a daily pause, but expect it to be short-lived. We‘re looking at triple-digit oil not too many months away. 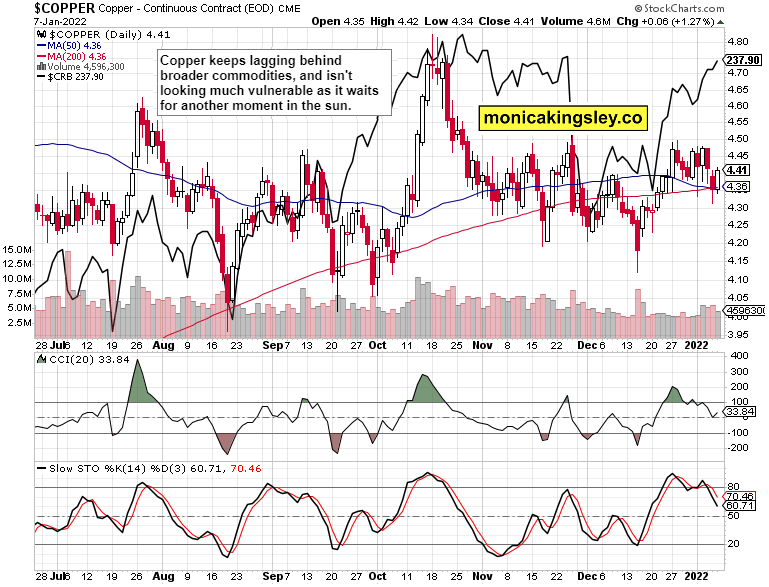 Copper pared back Thursday‘s setback and definitely isn‘t overheated. The sideways consolidation that would be resolved to the upside, continues – the bears are fighting a losing battle. 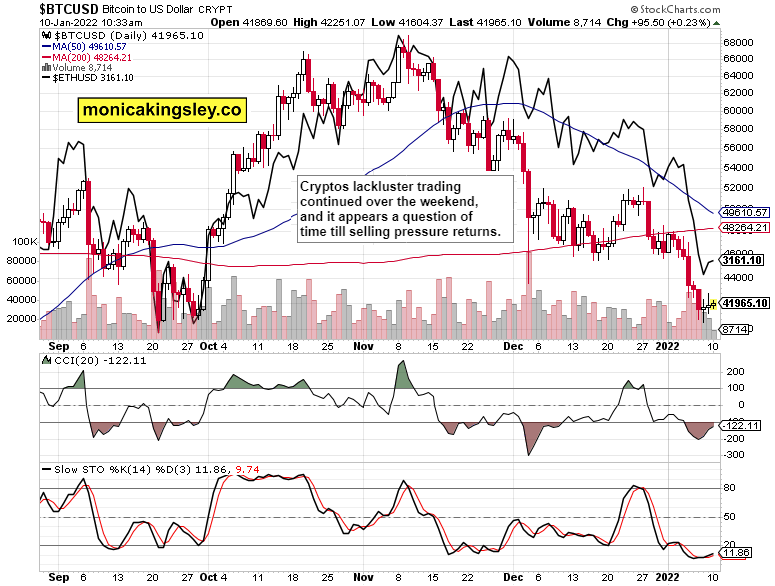 Bitcoin and Ethereum continue trading on a weak note, and the sellers are likely to return soon. This certainly doesn‘t look like a good time to buy.

S&P 500 still hasn‘t turned, and I‘m looking for more weakness – tech continues leading to the downside, and bond reprieve hasn‘t yet arrived. Anyway, it‘s questionable how fast tech would react – value can‘t keep S&P 500 afloat by itself. The realization of the hawkish Fed is here as much as the jobs data not standing in their tightening plans (wage pressures are here as quite a lot of vacancies remain unfilled – hello, full employment) – and assets are reacting. As I have stated in the 2nd and 3rd paragraphs of today‘s big picture analysis (investors would appreciate thoroughly), we‘re in for a challenging year in stocks, a great one in precious metals and most commodities – and definitely in for turbulence arriving, pulled over into 1H 2022 courtesy of the Fed.