Global stocks and the price of crude oil declined sharply as investors reflected on the new coronavirus variation that has emerged in South Africa. In Europe, the FTSE 100 index declined by more than 3% as airlines and hotel companies struggled. The DAX index fell by more than 2.65% while the CAC 40 declined by more than 3%. Elsewhere in the United States, futures tied to the Dow Jones shed more than 800 points while those linked to the Nasdaq 100 fell by more than 230 points. Crude oil also tumbled to below $80. The market is worried because this variant is spreading faster than Delta. It is also evading vaccines

Swiss franc shot up against the US dollar as the market reflected on the relatively strong economic numbers from Switzerland. In a report, the country’s statistics agency said that employment levels rose to more than 5.21 million in the third quarter. This is a sign that the country’s labor force has moved to where it was before the pandemic started. Additional data showed that the country’s economy expanded by 1.7% on a quarter-on-quarter basis. This was a better performance than the median estimate of 1.6%. The economy rose by 4.1% on a year-on-year basis. Still, there are minimal chances that the Swiss National Bank will start tightening.

The Japanese yen also strengthened against the US dollar even after the relatively weak numbers from Japan. According to the country’s statistics agency, the headline consumer price index in Tokyo rose from 0.1% in October to 0.5% in November. Core CPI, which excludes the volatile food and energy products, rose from 0.1% to 0.3%. These numbers show that Japan is struggling to stimulate inflation even as energy prices soar. Other important numbers published today were the positive German import and export price index and the strong Sweden retail sales data.

The USDJPY pair has been in a strong bullish trend in the past few weeks. Some of the gains made were undone today as worries of the new variant arose. The pair crashed to a low of 114, which was lower than this week’s high of 115.50. By dropping, it managed to move below the key support level at 114.71, which was the highest point in October. The pair has moved to the lower side of the Bollinger Bands while the MACD has formed a bearish divergence. Therefore, the pair will likely have a relief rally on Monday as the market reflects on the variant.

The EURUSD pair rose ahead of a speech by Christine Lagarde. It also rose as part of the overall dollar weakness. It is trading at 1.1280, which is slightly above this week’s low of 1.1187. Due to the sharp drop experienced recently, the pair remains below the 25-day and 50-day moving averages. The Relative Strength Index (RSI) and Stochastic oscillator have also pointed upwards. Therefore, the pair will likely hold steady for now, with the next key reference point being at 1.1300. 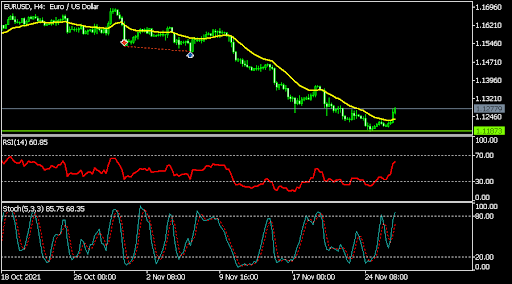 The FTSE 100 index declined sharply on Friday. It fell to a low of 7,052, which was the lowest level since October 14. Before the crash, the pair formed a bearish flag pattern that is shown in pink. It also formed a head and shoulders pattern. Subsequently, the index has fallen below the 25-day and 50-day moving averages. Therefore, the index will likely close near the current level. 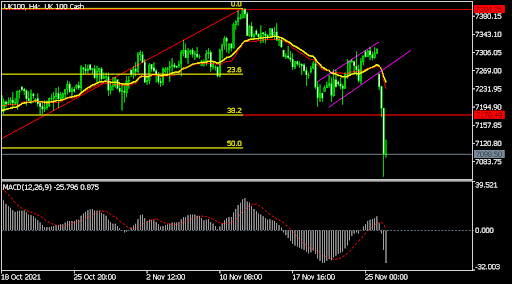