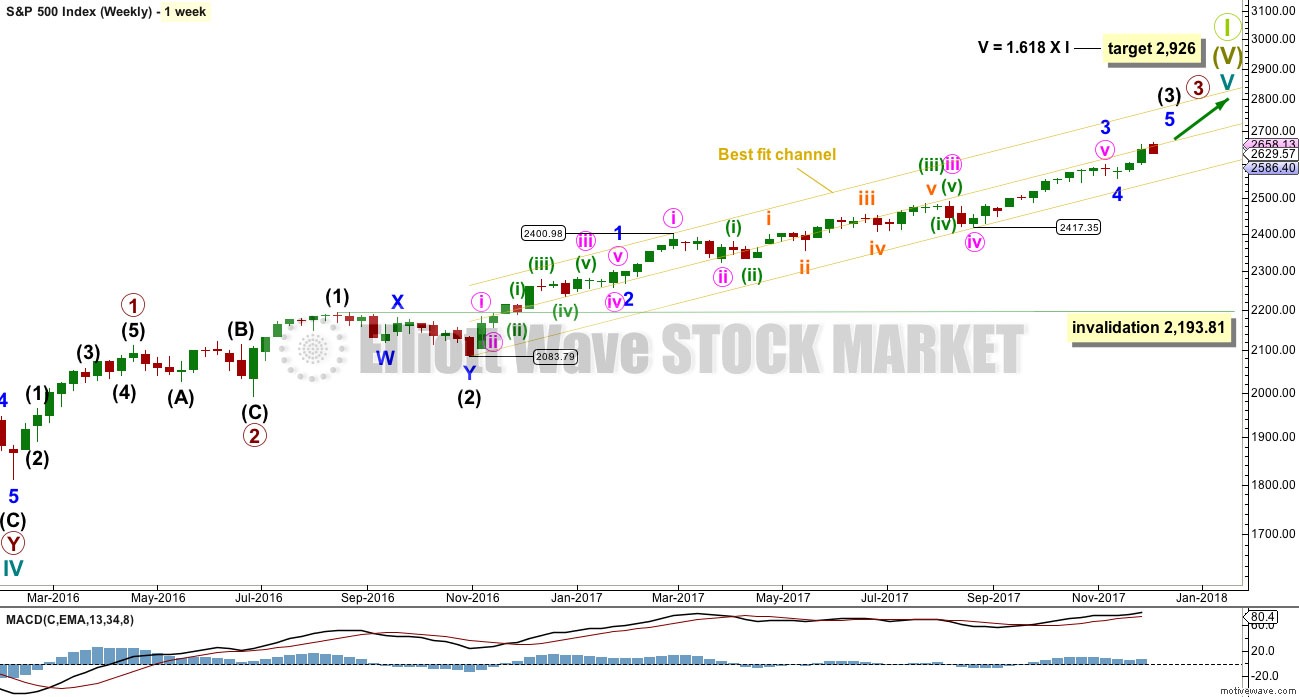 Cycle wave V must complete as a five structure, which should look clear at the weekly chart level. It may only be an impulse or ending diagonal. At this stage, it is clear it is an impulse.

The yellow best fit channel is redrawn. Price points are given so that members may replicate this channel. This channel is copied over to the daily chart. 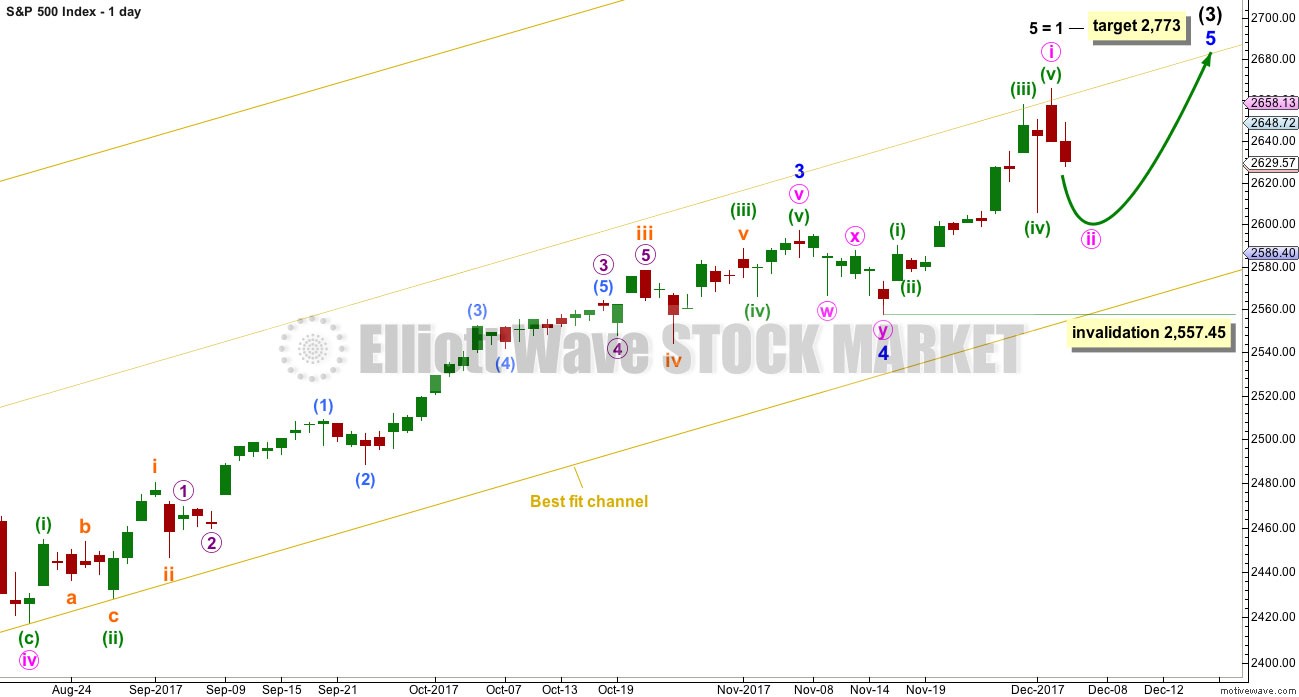 We should always assume the trend remains the same until proven otherwise. Assume that minor wave 5 is incomplete while price remains above 2,557.45.

Within minor wave 5, no second wave correction may move beyond the start of its first wave below 2,557.45. 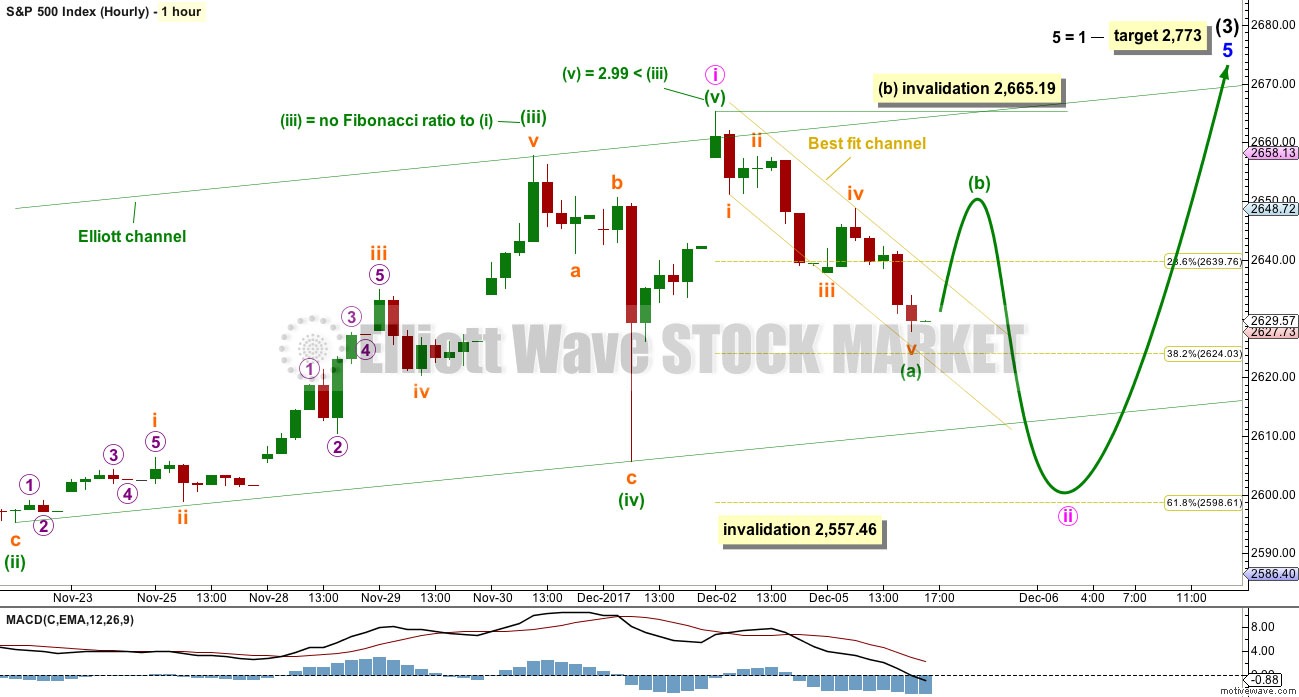 This first hourly chart follows on from labelling on the daily chart.

Minute wave ii looks like it may now end closer to the 0.618 Fibonacci ratio than the 0.382 Fibonacci ratio. It may be subdividing as a simple zigzag. 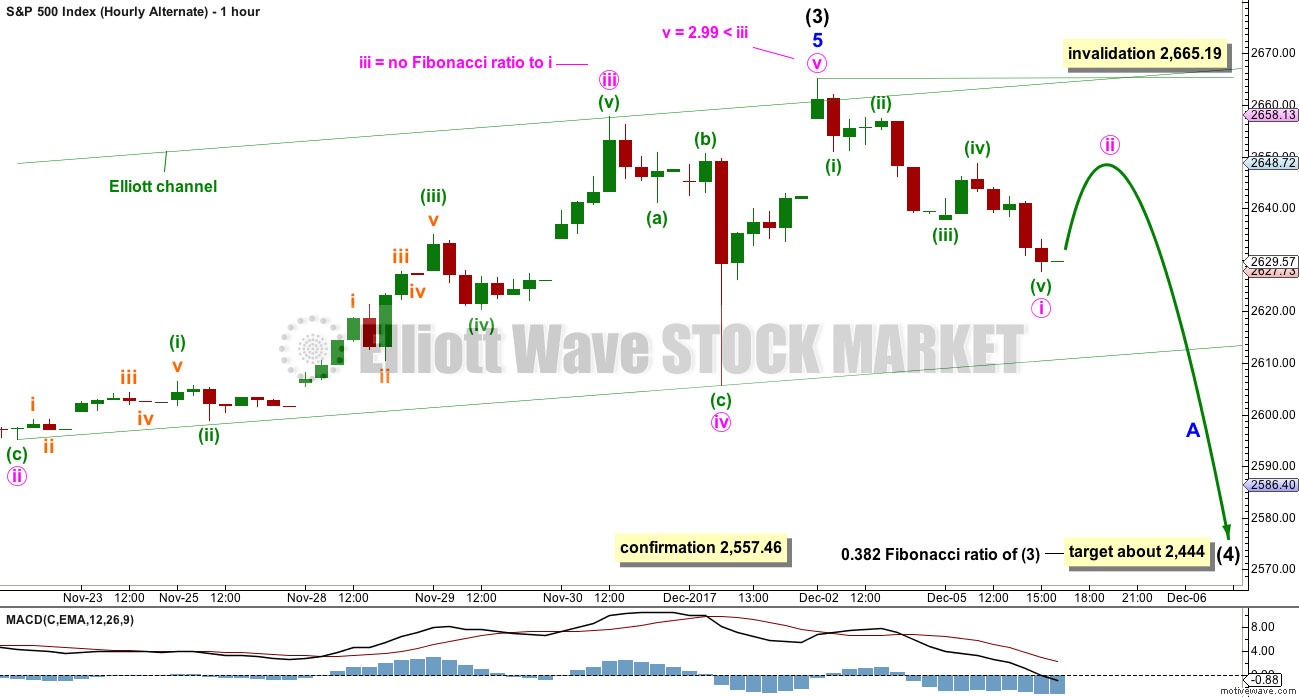 Because we should always assume the trend remains the same until proven otherwise, this wave count should be considered an alternate while price has not confirmed it.

By simply moving the degree of labelling within the five up from the end of minor wave 4 all up one degree, it is possible to see that intermediate wave (3) could be over.

If this wave count is confirmed with a new low below 2,557.46, then it would expect a multi week pullback or consolidation for intermediate wave (4) to last about ten weeks or so.If it is a complicated combination or a triangle, then it may be longer lasting, possibly a Fibonacci thirteen or even twenty-one weeks.

At this early stage, the 0.382 Fibonacci ratio of intermediate wave (3) would be a reasonable target.

For the short term (the next week or so), a trend change at intermediate degree should see a larger five down develop at the hourly chart level. So far only a first wave within that five down may be complete.

Minute wave ii may not move beyond the start of minute wave i above 2,665.19.

Both wave counts expect overall the same direction next. 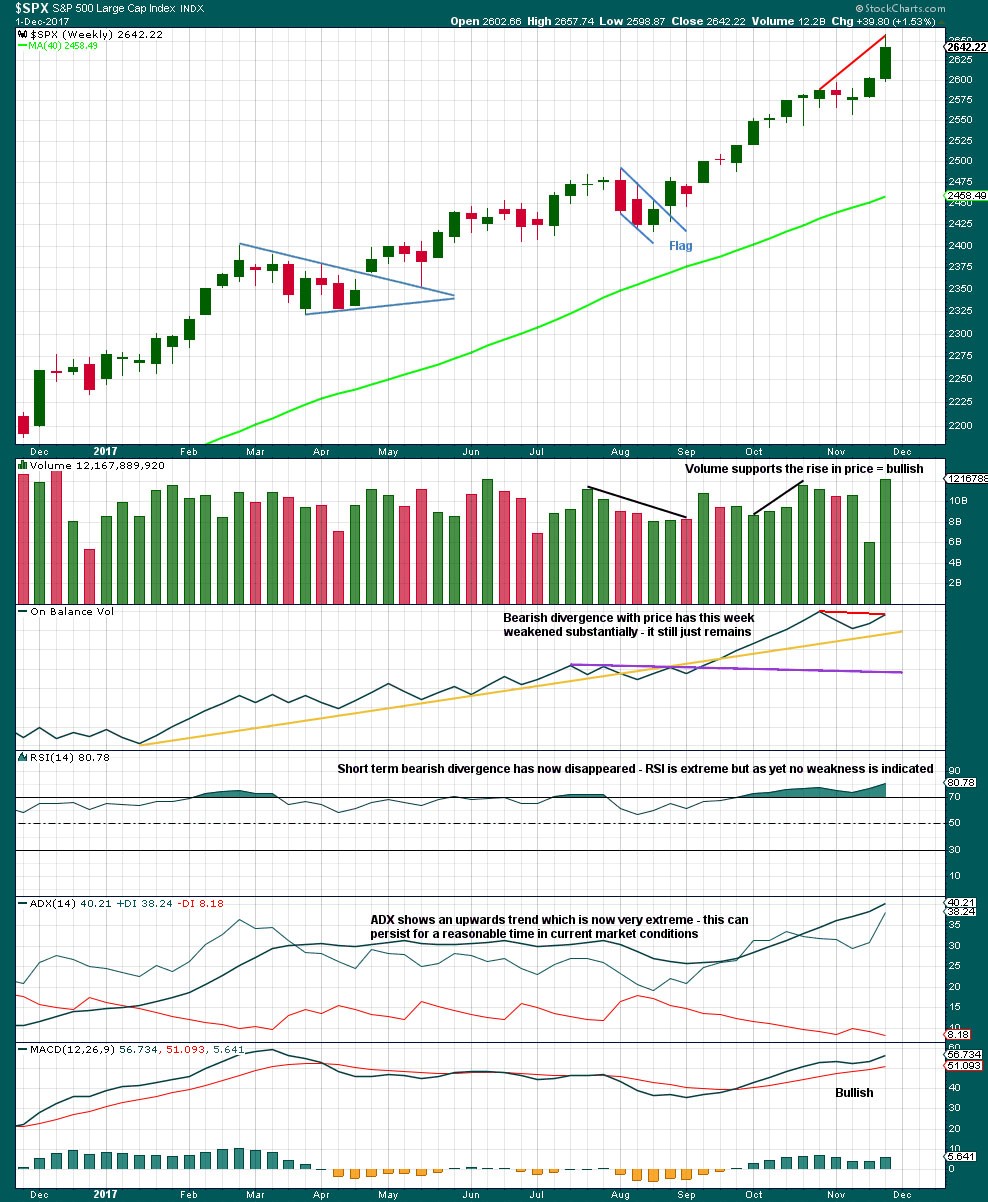 This last week completed the strongest volume for a year, which for an upwards week is very bullish.

This trend is extreme, but it could still continue for a while longer. Look for a candlestick reversal pattern or a bearish signal from On Balance Volume. 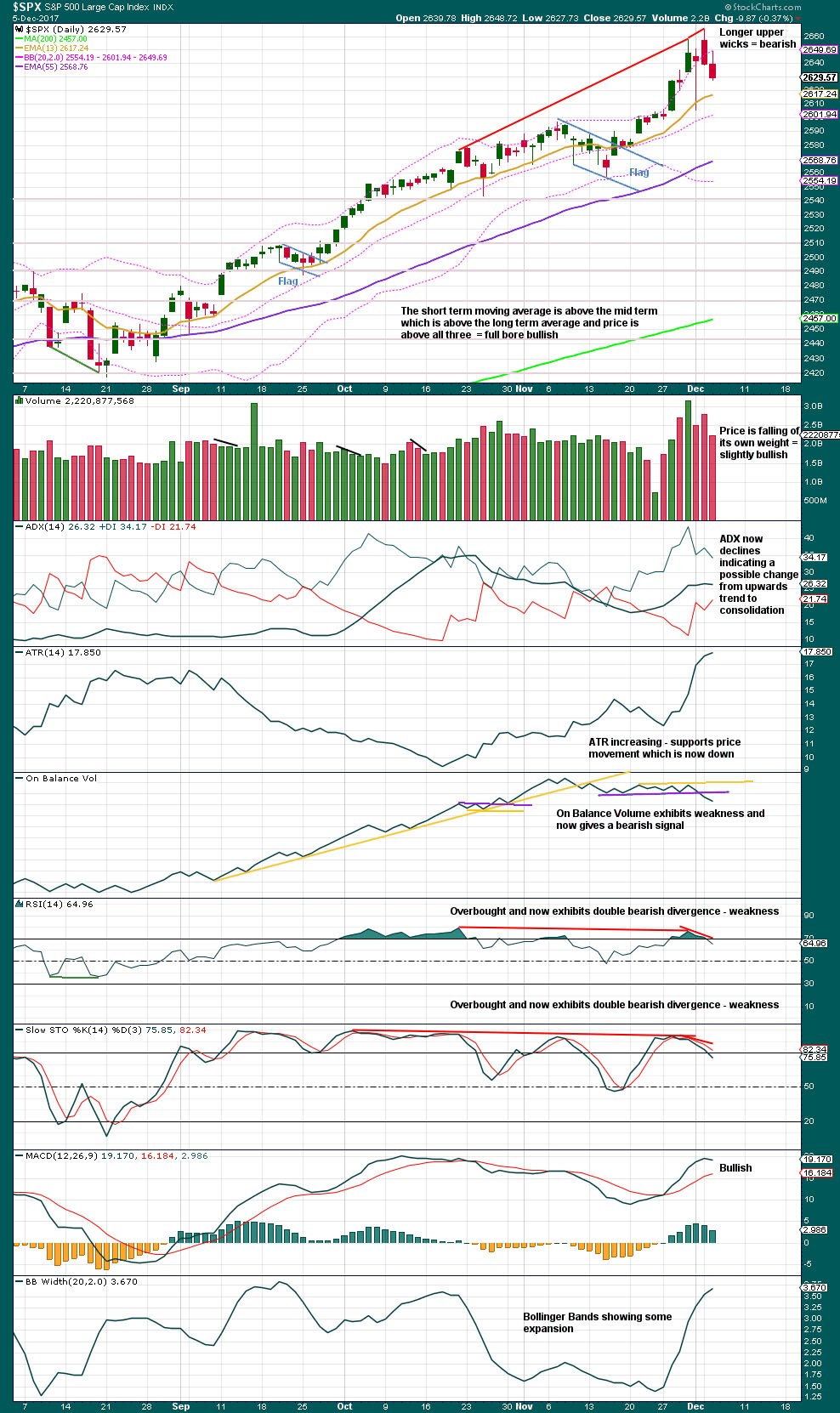 The target using the measured rule from the last flag pattern was about 2,633. It was met and well passed. Price is now turning downwards.

RSI, Stochastics and On Balance Volume are all bearish. 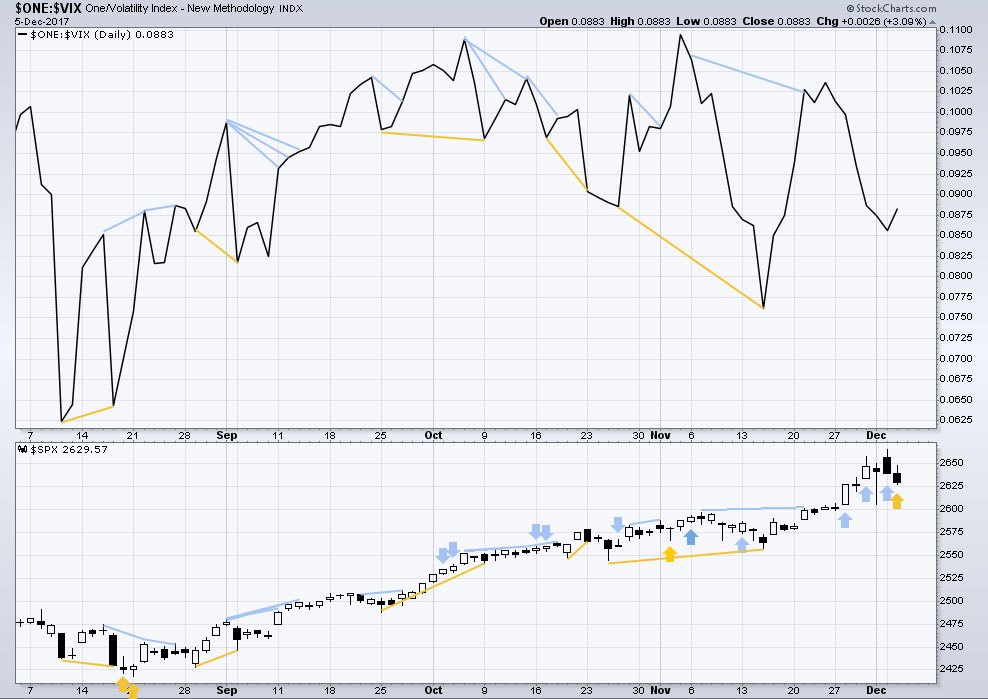 So that colour blind members are included, bearish signals will be noted with blue and bullish signals with yellow.

Normally, volatility should decline as price moves higher and increase as price moves lower. This means that normally inverted VIX should move in the same direction as price.

Another bearish signal noted yesterday between price and inverted VIX has now been followed by a downwards day. This bearishness may now be resolved, or it may require another downwards day to resolve it.

Price has moved lower today, but inverted VIX has moved higher. Downwards movement did not come with a normal increase in volatility. Volatility declined, which indicates weakness within price today and is interpreted as bullish. 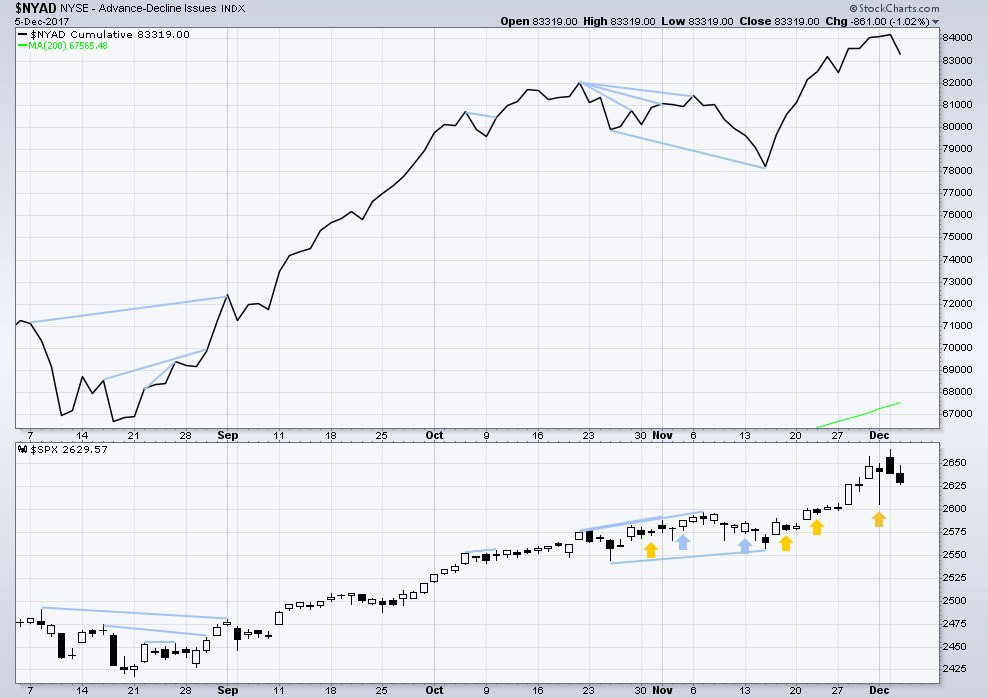 There is normally 4-6 months divergence between price and market breadth prior to a full fledged bear market. This has been so for all major bear markets within the last 90 odd years. With no longer term divergence yet at this point, any decline in price should be expected to be a pullback within an ongoing bull market and not necessarily the start of a bear market.

All of large, mid and small caps last week have made new all time highs. The rise in price has support from market breadth.

The DJIA, DJT, S&P500 and Nasdaq have last week made new all time highs. This provides confirmation of the ongoing bull market.

The following lows need to be exceeded for Dow Theory to confirm the end of the bull market and a change to a bear market: