In the second part of our series on debt in the U.S. economy, we focus on the debt of the household sector. Because the financial health of consumers has generally improved meaningfully in recent years, a downturn in the U.S. economy that is caused by financial stress in the household sector does not seem likely, at least not in the foreseeable future. But the rise in auto and student debt could have adverse effects, at least at the margin, on certain individuals and specific areas of consumer spending in coming years.

In a recently released report, we highlighted the rising amount of debt that the United States has accumulated over the past few decades. Indeed, the combined debt of the American household, business and government sectors is about $15 trillion higher today than it was ten years ago. Yet there are few signs of financial stress in the U.S. economy at present. That is, long-term interest rates are extraordinarily low, the stock market is nearing all-time highs, and credit spreads generally remain tight. But many reasonable observers can rightly wonder if different sectors in the U.S. economy can continue to accumulate debt without eventually suffering adverse consequences. In this second installment in our series on American debt, we focus on the U.S. household sector.

In this report, we draw heavily on analysis we published earlier this year and we refer interested readers to that report for more details. As shown in Figure 1, the amount of household debt outstanding totaled $13.7 trillion in Q1-2019, which represented an all-time high. Mortgage debt accounted for the vast majority (68%) of the total with student loans and auto loans the next largest categories. But it would be mistaken to focus on the absolute amount of consumer debt in isolation. 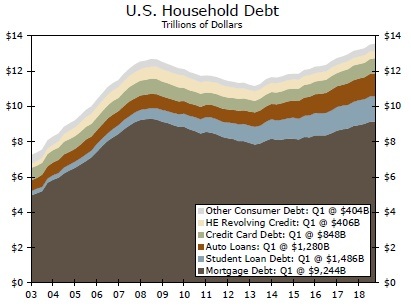 Rather, one should look at both sides of the household balance sheet. Although household liabilities have risen by $1.6 trillion on balance since 2008, the value of household assets have mushroomed by about $48 trillion over that period (Figure 2). Households have $104 trillion of net worth at present, an increase of roughly 80% relative to 2008. 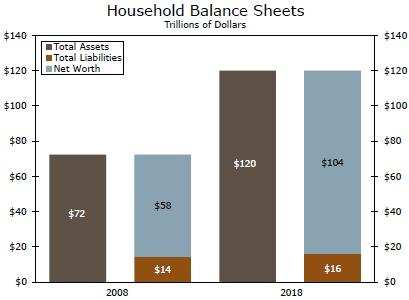 Not only are consumer balance sheets generally stronger today than they were ten years ago, but the ability of the household sector to service debt is much improved as well. [As shown in Figure 3, the financial obligations ratio, which measures the ability of households to service monthly financial obligations, such as mortgages, auto loans, etc., - fell sharply in the immediate aftermath of the Great Recession as interest rates nosedived]. At only 15.3% of disposable income, the financial obligations ratio currently stands near a 40-year low. Even if the Federal Reserve were to raise interest rates significantly, which does not seem likely anytime soon, the debt profile of the household sector implies that the financial obligation ratio would not shoot higher, at least not for the foreseeable future. As noted previously, mortgages account for two-thirds of overall household debt, and the vast majority of mortgages have fixed-rate structures. Subdued debt growth over the past ten years in conjunction with solid income growth over that period has resulted in a marked decline in the household debt-to-income-ratio, which is measure of household leverage-over that period (Figure 4).

Are Auto and Student Loans a Problem?

In sum, the financial health of the U.S. household sector has improved meaningfully, at least relative to its status ten years ago. That said, there have been some changes in the profile of household debt that could have some financial and economic implications down the line. Although the level of household mortgage debt today is more or less unchanged on balance relative to 2008, the amount of auto loans has risen by nearly $500 billion over that period. Moreover, auto loans to individuals with low credit scores (i.e., FICO scores less than 660) have increased markedly over the past ten years (Figure 5). Origination of auto loans to individuals with FICO scores less than 660 totaled only $84 billion in 2009, but origination ramped up to nearly $200 billion per annum between 2015 and 2018. 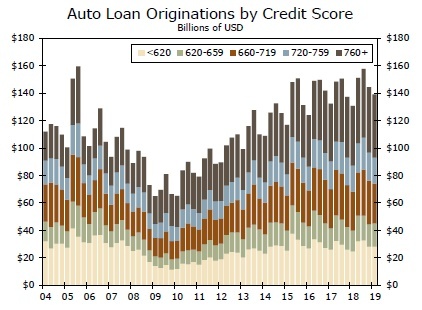 But the risk profile of new auto loans has not changed much over the past ten years. Roughly onethird of new auto loans in 2009 were made to individuals with FICO scores less than 660, and that percentage has remained more or less constant subsequently. Furthermore, the amount of outstanding auto loans simply is not in the same ballpark as mortgage loans. There are nearly $1.3 trillion worth of outstanding auto loans today, but the amount of residential mortgages at the height of the housing bubble a decade ago exceeded $9 trillion. A wave of defaults on auto loans, should one occur, would not have the same crippling effect on the economy as mortgage defaults did a decade ago.

On the other hand, however, student loan debt could have adverse implications for certain individuals and some segments of the economy. Student loans account for 35% of the total outstanding debt among individuals aged 18 to 29 years old (Figure 6). High debt loads make it more difficult, everything else equal, for those individuals to qualify for mortgages or auto loans, which could exert headwinds on the housing and auto markets. Indeed, researchers at the Federal Reserve Bank of New York (FRBNY) estimate that the increase in student loan debt can explain between 11% and 35% of the 8 percentage point decline in the homeownership rate of individuals in their late 20s.1 In addition, delinquencies could negatively affect individuals' credit scores for a long time, which could also impede their ability to finance other types of spending in the future. In that regard, roughly 9% of student loans are seriously delinquent (i.e., 90 days or more past due), which is significantly higher than comparable rates on other types of household debt such as mortgages, auto loans and credit cards. 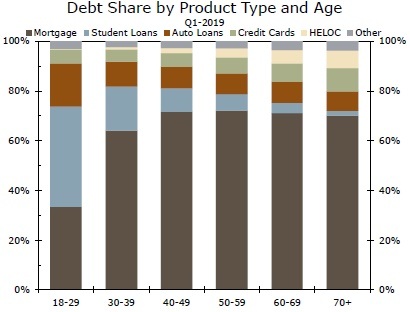 The financial health of the household sector has improved markedly over the past ten years. Households have de-levered, net worth has risen significantly and the amount of income that consumers need to service their monthly financial obligations has declined meaningfully. In our view, a downturn in the U.S. economy that is caused by financial stress in the household sector does not seem likely, at least not in the foreseeable future.

There could be adverse consequences for certain individuals and sectors of the economy, at least at the margin. Individuals with excessive auto and/or student loan debt could find qualifying for mortgages or additional auto loans to be more difficult, which could exert some headwinds on the housing and auto markets in the future. But the increase in auto and student loans that has occurred over the past decade probably will not have significantly negative effects on the macro-economy in the near term. We will analyze debt in the non-financial corporate sector in our next report in this series.