Fed Chair Powell’s post FOMC press conference on Wednesday night, rather than FOMC decision itself, erred to the hawkish side. Traders were quick to grab onto Powell’s comment that the Fed could raise interest rates at every subsequent meeting this year. Those, and other comments from Powell, were enough for some to contemplate a 50bps hike when the Fed meets in March and for quantitative tightening (QT) to commence as soon as May 2022.

By Thursday’s European session both the US-2yr benchmark yield and the DXY had soared to multi-year highs, finding additional support by a better-than-expected advanced US Q4-2021 report. The US 10-year yield, however, fell as investors reacted to signs that geopolitical tensions related to the Ukraine were easing and reassessed lower the outlook for US growth and inflation. European and US equities markets, however, were buoyed by reduced geopolitical risks and what could have been a more hawkish Fed.

US 2y10yr Spread Narrows as US 2 Benchmark Yield Soars 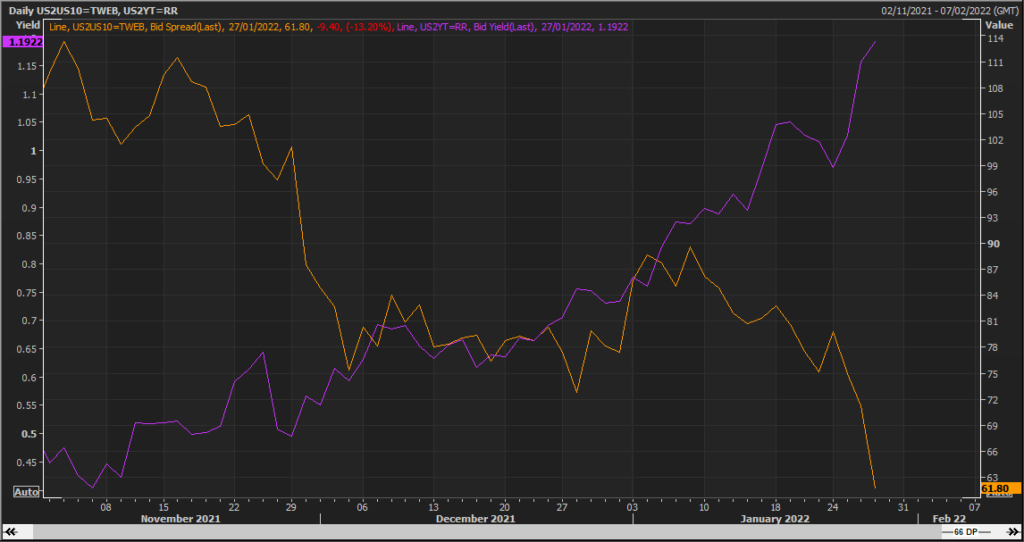 The major currencies that have borne the brunt of the recent surge in the US dollar have been the safe-haven Swiss franc and high-yielding Australian and New Zealand dollars over the past week. But only the NZD/USD has so far registering oversold conditions in both the daily and 4 hour RSI. Still, the currency pair faces a number of headwinds that urge caution before considering a long entry. 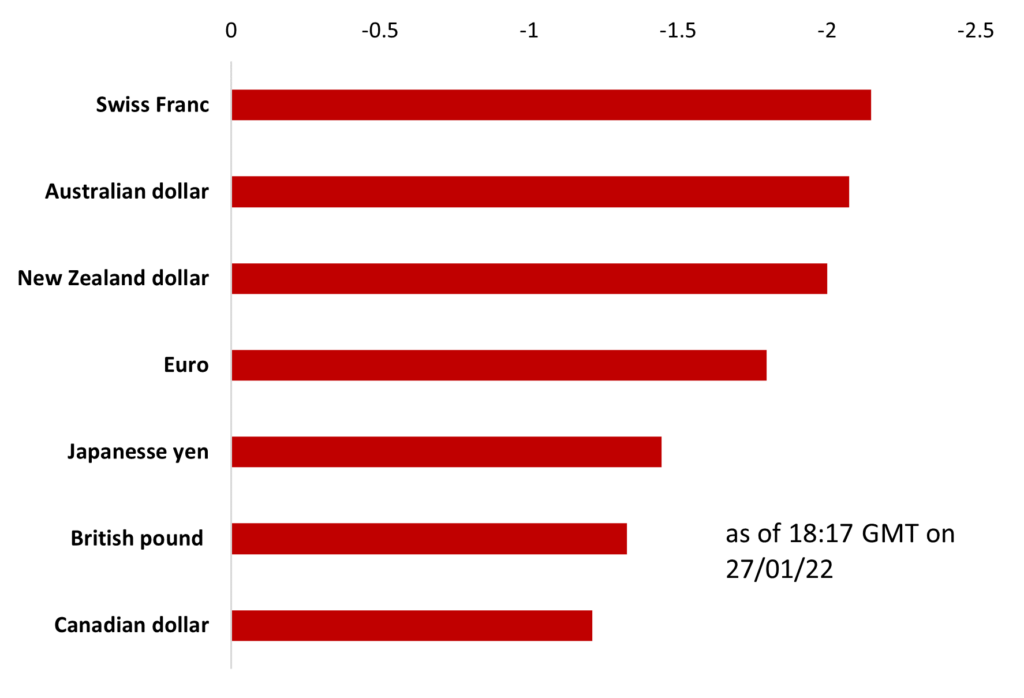 PLENTY OF REASONS TO BE WARY A LONG ENTRY

First, the The Reserve Bank of New Zealand (RBNZ) is already ahead of the Fed in terms of tightening policy, starting in October 2021 with a total of two hikes to bring its base rate to 0.75%. Despite data released Wednesday showing inflation in New Zealand surging to 5.9% in the final quarter of 2021, which cemented a further 25 bps hike when the RZNB meets on 23 February, the NZD/USD has still come under continued pressure.

Second, as the pair is highly susceptible to risk sentiment, it is likely to continued pressure under choppy global equity conditions and any disfavour geopolitical events like current tensions regarding the Ukraine. That sort of susceptibility adds to the risk of entering long or short entries on the pair.

Lastly, the technical setup looks challenging even if the pair measures oversold. The pair broke below the 200 exponential moving average (EMA) on the 10 November 2021 and then had a failed to break above the 200 EMA in mid-January this year. Likewise, the pair has recently broke through the downward channel established in August last year.

That said, from a market structure perspective, the pair is nearing support at the 0.65095, where if it fails to make sustained break below would remove confirmation of downtrend. If the pair is truly oversold, a better risk-return entry may be to wait for the pair to retest and break above the bottom of the trend-channel before considering a long entry position.