Another week is almost over, with the EUR/USD pair having flirted with 1.1900 for the first time in over two years and the greenback mixed across the board, but still weak. The American currency only gained these last few days against currencies that eased on self-weakness, as the negative sentiment towards the greenback remains intact. If anything, chances of a rate hike in the US have decreased further on dovish comments from Fed's officers, while political jitters keep coming as President Trump seems unable to focus beyond the Obamacare repeal bill and North Korea, still struggling to form a reliable team around him.

Traders have one more milestone to surpass this week that is, the US monthly employment report, to be release this Friday. The country is expected to have added 183K new jobs in July, after June's positive surprise of 222K. The 4.4% unemployment rate is still expected to drop to 4.3%, while average hourly earnings are expected to be up 0.3% monthly basis, and by 2.4% on the annualized figure, this last, slightly below previous 2.5%.

The ADP survey released on Wednesday showed that the private sectors added 178,000 new jobs last month, just below forecasts for of 185,000, while June reading was upwardly revised to 191,000 from an initial estimate of 158,000, neutralizing the slightly negative headline, and somehow anticipating a solid US employment report, but would it matter?

There's has been long since the US Nonfarm Payroll report triggered interesting market movements, except in the case of big disappointments, quite logical given the ongoing distrust in dollar's future. And that will be the case for this Friday: the NFP report will only be relevant if it's a big miss.

All components will be relevant, but jobs' creation and wages will take center stage, as slow wage growth will maintain inflation subdued, and with poor inflation, there are no rate hikes in the Fed's book.

There is one reason why a strong report can trigger a downward move in the EUR/USD pair: the market can take it as a reason to take profits out of the table ahead of the weekend. Yet after the dust settles, probably early next week, the common currency could resume its advance.

The EUR/USD pair stands a handful of pips below its yearly high, up for a third consecutive week, and pretty much advancing since mid April, resulting in overbought conditions in daily and weekly charts, another reason why a pullback can't be dismissed. At the same time, there´s no sign of upward exhaustion, which means that the rally can extend on a lousy report. 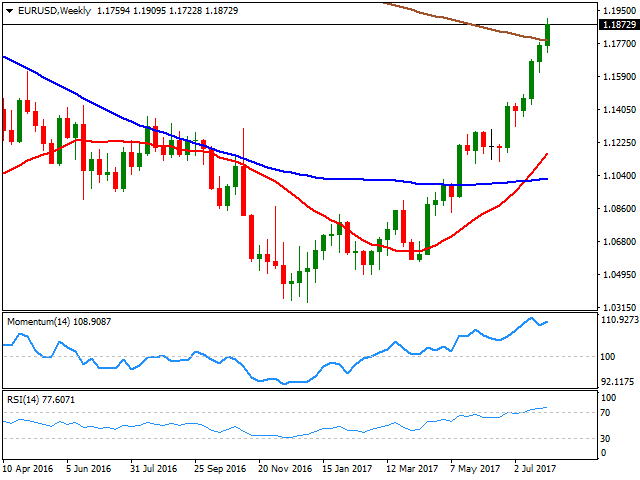 The weekly chart shows that the price is now above its 200 SMA, the first time since July 2014, while technical indicators maintain their upward slopes within overbought territory. In the daily chart, the RSI indicator keeps heading higher around 75, while the Momentum indicator consolidates near its recent record highs, as all of the moving averages head north far below the current level, all of which supports more gains ahead.

Beyond 1.1910, the next resistance comes at 1.1950, followed by the critical 1.2000 threshold, where the market can also rush to take profits out of the table. To the downside, 1.1830 is the immediate support, with a more relevant one at 1.1785. Below this last, the corrective movement can extend down to 1.1715, August 2015 high, without affecting the dominant bullish trend.

Gold advances above $1,820 amid declining US T-bond yields

Gold continues to push higher on Wednesday and trades above $1,820. The benchmark 10-year US Treasury bond yield seems to have lost its traction following a three-day rally, supporting XAU/USD's upside.