Now hiring – while it may take time to get some 9.5 million Americans back to work, many companies are looking for new workers. For currency traders, the question is how much of that is priced into the dollar? Perhaps not enough.

Here are five reasons why it could be even higher, pushing the dollar up.

Are economists up to speed March's Nonfarm Payrolls report is set to show an increase of 630,000 jobs, the best read since October and after beating estimates in February with 379,000, on top of upward revisions.

After three months of misses, economists may have lowered their estimates, and could be underestimating the pace of the recovery.

The $600 dollar stimulus checks approved late last year pushed personal income higher in January and continued propagating through the economy during February and March. In the middle of last month, Congress approved a new covid relief package, this time including payments of $1,400.

Even if the impact of the new money will only be felt, later on, the drive toward pushing a large new fiscal plan probably raised confidence and encouraged hiring.

The goal of offering immunization to every American by May 1 seems feasible as more and more states have already achieved that milestone. At the current pace, doses will reach the arms of half of the US by May 9.

In Israel, cases began falling sharply around the time they reached 50% of the population. With 1.75 million people getting their first shot in America every day, optimism is another source of hiring. 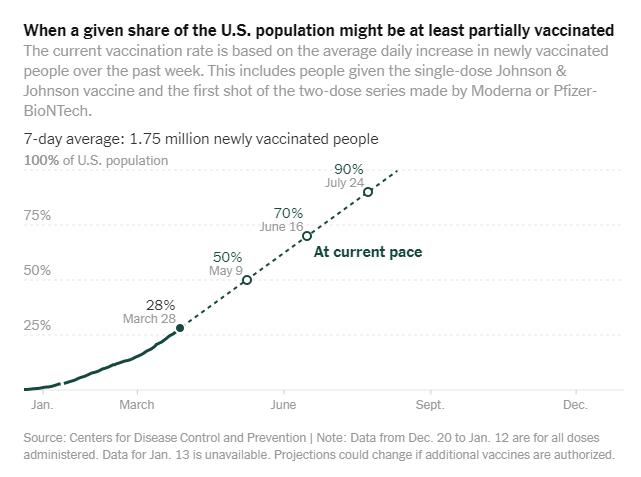 Texas Governor Greg Abbot canceled all restrictions and was the first to burst out the door – as if it were a saloon in the wild west. While some states are suffering an increase in cases, the quick return to normal has also contributed to additional jobs being created – at least in the services sector.

Bars and restaurants are filling up once again, and that is the source of many jobs that cannot be automated.

Early indicators of a hiring spree have been seen in the flip side of employment – unemployment. Weekly jobless claims dropped to 684,000 in the week ending March 19, the lowest since the spring of last year. Continuing applications have also been trending lower.

While the correlation between weekly claims and the Nonfarm Payrolls has not always been consistent, it is a better indicator than ADP's jobs report.

All in all, there is room for substantial job growth, but how much is priced in?

As mentioned, the economic calendar is pointing to an increase of 630,000 positions, which would be a significant increase from last month. Any figure above that would already be a surprise that is not priced in.

As the Federal Reserve disregards the Unemployment Rate but focuses on bringing people back to work, revisions to data for the past two months are also critical. If the US gained only 600,000 positions but if another 100,000 or more added to the tallies for February and January, it would also serve as an upbeat development.

While some of the elevated increase is priced in, it is essential to note that the timing of the release – Good Friday. All of Europe and also other parts of the world are enjoying the Easter holiday, which means that trading volume will likely be extremely low. Under these circumstances, price action will likely be wild.

For the dollar, a small NFP beat could turn into a massive rally – just due to low liquidity.

March's US jobs report will likely mark the beginning of accelerated recovery. Part of that is already reflected in the dollar's value, but probably not all of it, given the five reasons described above. Exceptionally low liquidity may trigger substantial moves.