Economic optimism can be premature.Throughout the summer and fall it appeared that the US was on its way. More than half the lockdown job losses had been replaced by October, jobless claims had halved from July and pandemic cases were down everywhere in the country.

But just two months later much of that progress had reversed.

Viral cases were soaring. California closed its economy. Payrolls had collapsed into losses in December and unemployment claims had climbed more than 200,000 by the first week of January.

The US economy is again on the cusp of a breakout but this time the economic indicators are backed by vaccination rates that should, it is hoped, render the pandemic moot in a few months.

Let’s examine the prospect and the evidence.

Nonfarm Payrolls are forecast to add 639,000 jobs in March, the highest total since last October. The unemployment rate is expected to fall to 6% from 6.2% in February. Average Hourly Earnings are predicted to gain 0.2% on the month and 4.5% on the year. Average Weekly Hours should rise 0.1 to 34.7.

Employers have added workers for two months after the California lockdown and restrictions elsewhere precipitated a 306,000 loss in December, the first since the initial closures in March and April. The combined 545,000 payroll increase in January and February was more than twice the 232,000 estimate.

The private payroll company Automatic Data Processing registered 517,000 new employees in March, about as expected, but it was the largest monthly gain since last September. February’s total was revised to 176,000 from 117,000.

Vaccination and the open economy

American vaccination rates are some of the highest in the world, with an estimated 75% of the population 65 years or older having received at least one shot. The eligibility has been lowered to age 50 in many places and more than 2.5 million does are being administered each week.

Though there has been a small rise in reported cases in the past few weeks, it has been far less than the wave late last year and is not threatening hospitals or other emergency services. 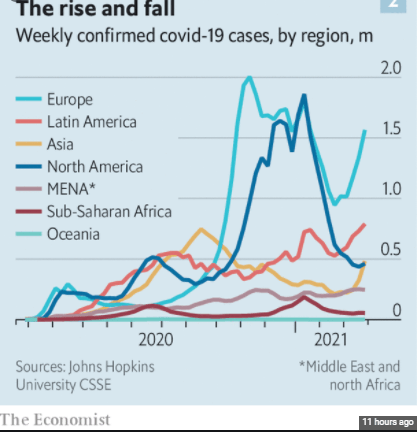 More importantly, no state governors are threatening or even hinting that another lockdown is needed. While restaurants, bars and other like establishments remain limited in some states and locales, much of the country is rapidly getting back to full and normal business.

Some of the more stringent governors in Michigan and Wisconsin have even had their emergency powers stripped by the courts for overstepping their legal powers.

Economic growth is accelerating from the 4.2% pace in the fourth quarter of last year. The Atlanta Fed GDPNow estimate on April 1 was 6% up from 4.7% on March 26. 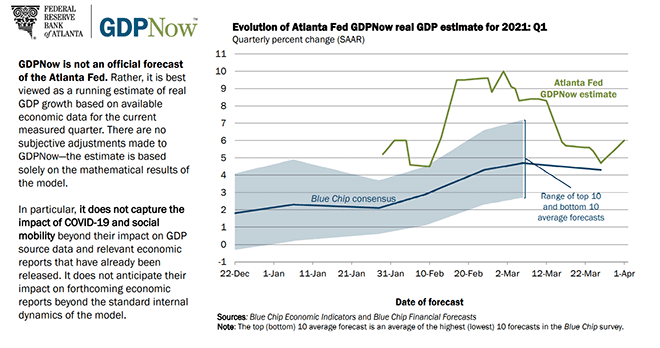 The Federal Reserve projection for 2021 posits a 6.5% expansion that would be the fastest annual growth in a generation.

The Conference Board Consumer Confidence Index rose sharply in March to 109.7 from 91.3  in February, far ahead the 96.9 forecast. Consumer sentiment is now at its highest level since the onset of the pandemic last March and about half-way between the February 2020 score of 132.6 and the April panic low of 85.7. 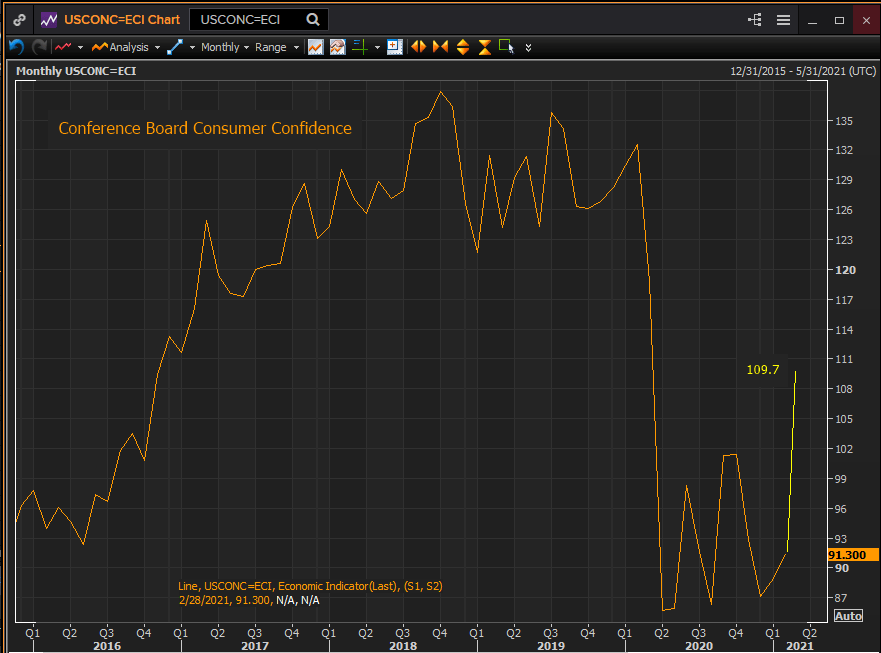 Separate Conference Board indexes for the Present Situation and Expectations also jumped in March, to 110.0 from 89.6 and to 109.6 from 90.9.

The Michigan Consumer Sentiment Survey reached 84.9 in March, its highest score in a year, from 76.8 prior, easily surpassing the 78.5 forecast. This index is also about half-way between its February 2020 reading of 101 and the April low at 71.8. 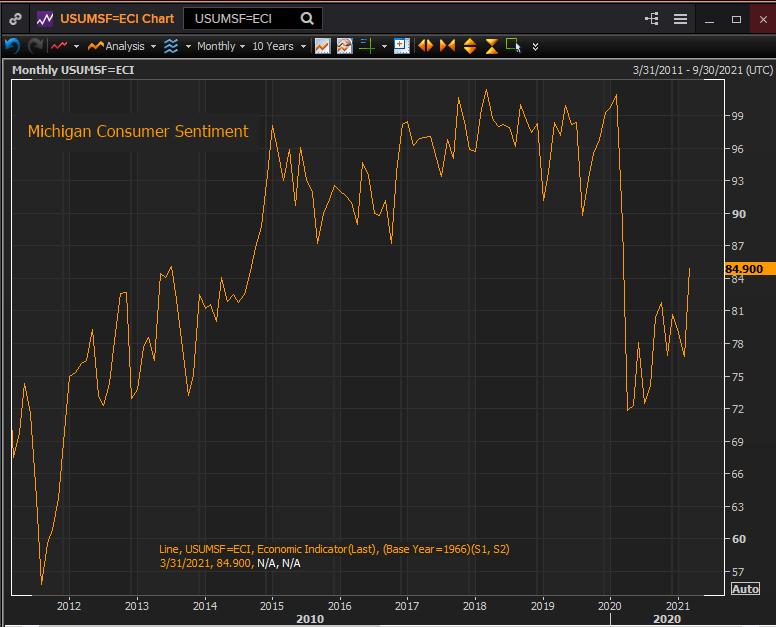 Americans would not be rating the improvement in the economy and their own personal situation so highly in March if they did not expect the job gains of January and February to continue.

To be more precise, the hiring that Automatic Data Processing (ADP) recorded this week, and the expected gains in Nonfarm Payrolls have already been experienced by the people (statistically speaking) who answered the Conference Board and Michigan surveys two and three weeks earlier.

The unexpected strength in both sentiment indexes devolves from the labor market.

The $600 stimulus payment to individuals in January fueled a 7.6% jump in Retail Sales, which, except for the May and June post-lockdown surge, was the largest monthly gain in over two decades. Sales then reversed 3% in February as the grants ended.

The latest $1400 gift, deposited in bank accounts in March, likely spurred a second wave of consumption that will be reported on April 15.

Consumer optimism did not increase appreciably in January, even with the stimulus payments, but it did in March. The likely difference is a much better labor market.

Managers in the manufacturing sector have rarely been as optimistic as they are now. 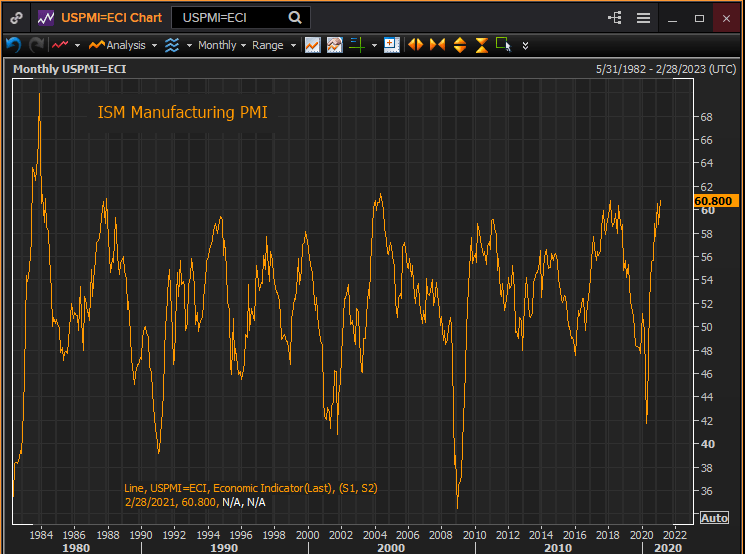 The New Orders Index averaged 64.25 for the eight months from July to February. That is the highest this gauge has been in 16 years, since the second and third quarters of 2004. 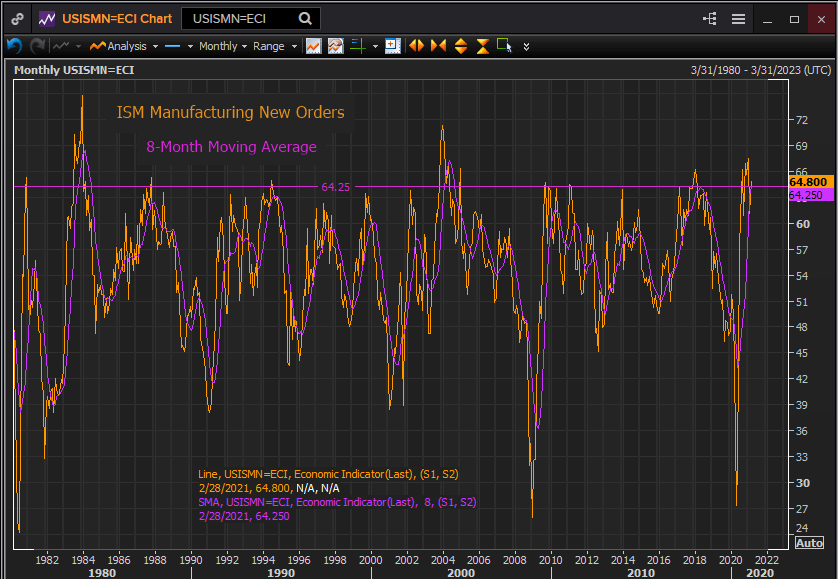 In fact, there has only been one other period with orders as extensive as this in the past four decades and that was during the Reagan boom in 1983 and 1984.

Hiring in manufacturing has trailed the general optimism in the sector. The Employment Index was 54.4 in February, the highest of the pandemic era but far below its readings in the excellent labor markets of 2017, 2018 and 2019. Those years were a time of rising wages and low unemployment for American workers as good as any since 1980.

The indicators all point to an excellent payroll report for March.

Vaccination rates have permitted a sense of returning normality in the country. The US economy is open and consumers seem to have recovered their optimism. Their willingness to spend was never in doubt and the March stimulus payment should foster another surge of consumption assisted by the psychological relief from the waning pandemic. Hiring should follow the retail economy.

Economic growth is strong and will be strengthened by retail spending, rising employment, stimulus cash and perhaps another $3 trillion in government spending.

Equities have been banking on a strong US recovery for many months.

Credit markets and the dollar have been more recent converts and this NFP report, especially if better than expected, will push Treasury rates and the dollar higher.  A weaker than forecast report will do scant damage as growth and the end of the pandemic, if delayed, are still the operating assumptions.

The risk for this NFP report is clearly in overperformance.

GBP/USD: Scottish election’s result may take its toll on pound

The British Pound took advantage of the broad dollar’s weakness, and GBP/USD  surged to 1.4005, retreating just modestly ahead of the close to settle around 1.3990. GBP/USD is technically bullish, could advance once above 1.4015 resistance.

Gold extended its rally after surging above $1,800 on Thursday. During the first half of the week, the XAU/USD pair struggled to rise above $1,800 and fluctuated in a horizontal channel. The next target on the upside aligns at $1,850.