The last two years have produced more than their share of novel experiences. So when US payrolls lengthen the most productive string of job creation in history without lightening the pall hanging over the economy, no one should be surprised.

American firms are forecast to hire 490,000 employees in March stretching the employment gains to 15 straight and 21 of the last 22 months. The US economy has now replaced or rehired 90.4% of the 21.991 million workers fired in the pandemic lockdowns of March and April 2020.

That laudable goal, once the sole focus of government and Federal Reserve policy, has been almost forgotten in the tsunami of inflation that has overtaken the economy. The economic situation is made more difficult because the fiscal and monetary policies that helped to revive the labor market also are a major cause of the surging prices which threaten to undo many of the gains of the last two years.

Unemployment is expected to drop to 3.7% in March from 3.8% in February. Average Hourly Earnings should add 0.4% in March after a flat February, and increase 5.5% on the year, up from February’s 5.1%. Labor participation may fall 0.1% to 62.2% and Average Weekly Hours should be unchanged at 34.7.

It is becoming clear that the reconstitution of the labor market is not enough to prevent inflation from crippling the economic recovery. The crucial factor is consumer spending. About two-thirds of US economic activity can be directly traced to personal expenditures. Will the increasing drain on household finances from inflation force a sustained pullback in consumption? Bloomberg  Economics has estimated that inflation will cost the average family $5200 in 2022. That is not an inconsiderable sum for most Americans. Will consumers continue to replace that lost purchasing power with savings or, having lost hope that inflation will abate, start economizing?

The answer to that question may determine whether the US economy fulfills the Atlanta Fed GDPNow prediction of a sharp drop in economic growth in the first quarter.

Let’s look at some of the employment particulars as they bear on consumption. 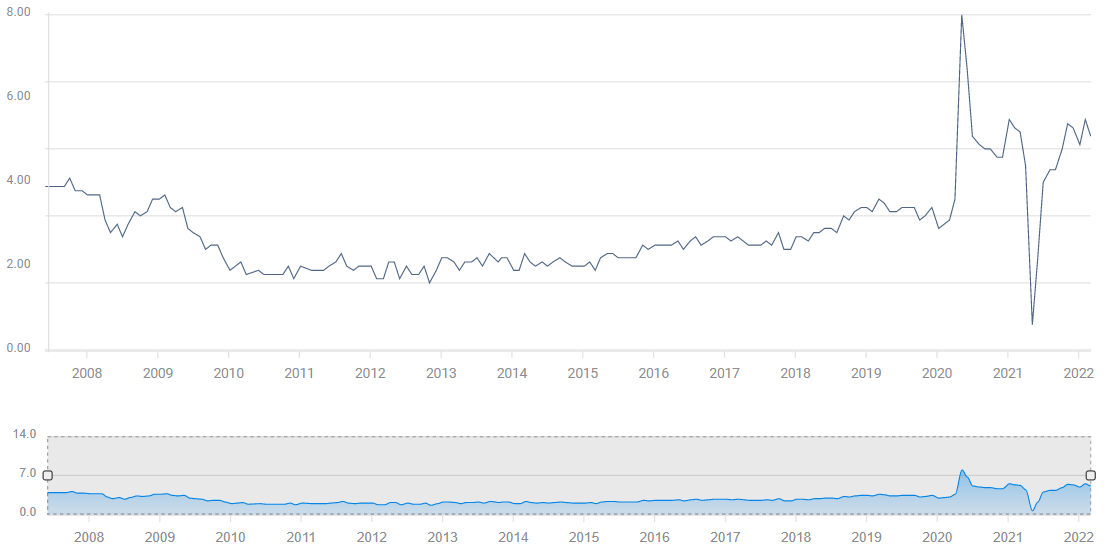 Neither countered the 7.9% jump in the Consumer Price Index (CPI) or the 6.4% increase in the yearly Personal Consumption Expenditure Price Index (PCE). Core rates were nearly as demonstrative with CPI at 6.4% and core PCE at 5.4%, the highest since 1983.

While the Federal Reserve considers core PCE inflation a more accurate representation of long-term price trends, household finances and more importantly spending decisions are based on actual consumer prices. Families do not have the options of economic theory. What is worse, the prices of many necessities have risen far more than the overall inflation rate. Gasoline is just the most egregious example, up 47% in a year.

Real Disposable Personal Income, corrected for inflation, from the Bureau of Economic Analysis (BEA)  fell 1.6% for the year ending in February. In a separate analysis, the BEA estimated that Americans lost 2.6% of their consumer purchasing power in the 12 months to February.

By whatever measure one chooses, the actual and psychological impact of inflation on American households will have a cumulative effect. Inflation is expected to remain elevated for many months. It may be too much to expect US families to absorb rising costs by dissolving assets set aside for the future. Sooner or later inflation must exact its toll on US consumption.

American consumer spending slowed substantially in February suggesting that runaway inflation, the highest in over four decades, could be starting to force US households to cut back on consumption rather than continuing to use their savings to supplement declining purchasing power.

Personal Spending rose 0.2%, less than half the anticipated 0.5% gain, though the January figure was revised to 2.7% from 2.1%. When adjusted for inflation real consumer spending declined 0.4% in February but, as in the unadjusted numbers, January was revised higher to 2.1% from 1.5%.

Retail Sales were also a bit slower than expected in February at 0.3% vs the 0.4% forecast with the same upward revision to January, to 4.9% from 3.8%.

Durable Goods Orders, the subset of Retail Sales for items designed to last more than three years in normal use, contracted 2.2% in February, far more than the -0.5% forecast and erased January's 1.6% gain. A good portion of the decline was due to slow automobile sales, suffering from a shortage of new vehicles.

Even with the slowdown in February, January’s surge should secure a strong quarter for consumption unless March exhibits a wholly unexpected collapse.

So far, American consumers have not made major changes in their consumption habits even though inflation is taking an ever larger bite from the family budget.

The Federal Reserve’s new anti-inflation policy projects six 0.25% rate increases by the end of the year. This goal is necessarily conditional on US economic growth.

The current first quarter GDP estimate from the Atlanta Fed GDPNow model posits a 1.3% annualized expansion for the first three months of this year.

Given the recent Fed rhetoric on inflation, it seems likely that the governors will increase the fed funds rate at the next meeting on May 4, even if US economic growth falls sharply in the first quarter when it is reported on April 27. Will that hold true if the economy contracts in the first three months?

There are five Federal Open Market Committee (FOMC) meetings after May. Brave intentions aside, it is difficult to see the governors continuing to increase interest rates at the assumed path, if economic growth in the first quarter is below 1%.

Second quarter GDP is reported on July 28, one day after the July FOMC meeting. Conceivably, the Fed could get in three rate increases at the May, June and July meeting before the potential weakness of the US economy is exposed by two consecutive quarters of weak or non-existent growth.

Thus far there are few signs that the US consumer has begun to cut back on spending or that the economy is suffering from an inflation-related drag on growth.

The availability of jobs and the ability of workers to seek higher wages are the main supports for consumer spending. If that is called into question by a weak payroll report, it undermines all of the assumptions that permit Fed policy to imagine a fed funds hike at every meeting this year.

If the NFP figure is as good or better than anticipated, higher US Treasury rates, anticipatory of Fed policy, will continue to support the dollar. Equities will benefit from the continued positive outlook for US economic growth.

A weak NFP result will excite the negative prospect for the US economy lowering Treasury rates and the dollar. Equities would quickly discover that the concern over a slowing or recessionary US economy far outweighs the benefits of temporarily lower interest rates.

Inflation may be the current market topic, but a weak employment report will immediately change the focus to economic growth.