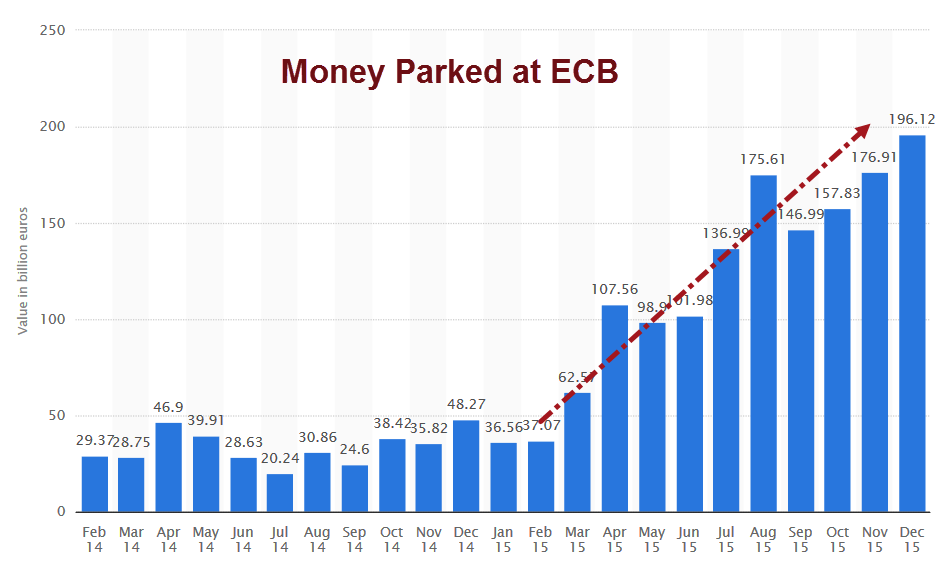 Above chart from Statista.

To encourage more lending, ECB president Mario Draghi cut the deposit rate for money parked at the ECB from -0.2% to -0.3% on December 3.

Clearly that did not work.

Target2 Imbalances in Billions of Euros 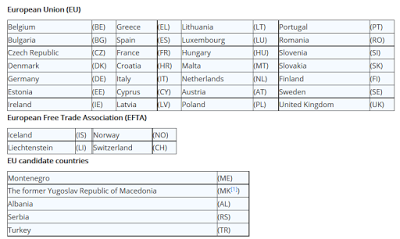 The above from Eurostat Country Codes.

Target2 is a measure of capital flight between eurozone countries. For example: A depositor in a Greek, Spanish, or Italian bank does not trust their bank so the depositor opens up a new account and transfers the balance to a bank in Germany, the Netherlands, or Luxembourg instead.

The recipient banks then park the money at the ECB at negative interest rates instead of buying Greek, Spanish, or Italian bonds.

Stepping back a bit, here's a key question: What caused the depositors to flee their banks in the first place?

The answer is fear of bail-ins, confiscations, capital controls, and bank failures like we have seen in Greece and Cyprus.

Recent examples include Portugal and Italy.

No Demand For Some Italian Bonds

Dec 11 Italians rushed to try to sell their bank bonds on Friday after taking fright at losses imposed on investors in four small lenders which had to be rescued last month.

Italy rescued Banca Marche, Banca Etruria, CariChieti and CariFe at the end of November under new European Union rules that shift losses to investors when a bank runs into trouble, moving the burden from taxpayers.

Some 130,000 shareholders and holders of 790 million euros ($864 million) in junior debt saw the value of their investments wiped out. It was the first time since the 1930s that bondholders suffered losses in a banking crisis. The suicide of a pensioner who lost money in the rescue has added to the outcry.

"People in Italy are rushing to sell subordinated bank bonds," said Giuseppe Sersale, a fund manager at Anthilia Capital. "Retail investors scared by the protests triggered by the rescue of the four banks are trying to sell, but there is no demand for them."

Fears grow every day. And why shouldn't they?

In the article, Tenebrarum discusses forced bail-ins, noting two recent cases, one in Austria and one in Portugal.

In the case of Portugal, five bonds were moved from the BES "good bank" to the "bad bank" overnight wiping out everyone holding those bonds when the ECB suddenly discovered a financial hole in a bank thought to have been bailed out in 2014.

The bail-in mechanism is not the problem.

Tenebrarum writes (and I agree) ...

"In principle, the BRRD, or 'bail-in directive' as it is also known, is quite a good idea. The fact that lending money to fractionally reserved banks or even merely depositing it with them, involves risks needed to be firmly reestablished. One simply cannot expect that banks and their creditors will be bailed out by taxpayers at every opportunity. By arbitrarily meting out unequal treatment to similar classes of creditors, they are unwittingly hastening this process of recognition."

Depositors increasingly say no. And the recipient banks in Germany, Netherlands etc, don't want to risk bonds in those countries when the deposits are transferred.

Target2 imbalances rise nearly every month as a result.

Tenebrarum concludes with few quotes by Ludwig von Mises, which go to the heart of matter. This one says it best.

“Sorry boys and girls, you will have to choose. You can either have capitalism, freedom, prosperity and personal responsibility, or you can have socialism, tyranny, poverty and ‘security’. You cannot have both.”

Here's an important question I leave you with: Do you think German banks are safe?

If so, you are badly mistaken. Think about Target2 for a second: If Spain, Italy, Greece, or any country leaves the eurozone, someone will have to eat those Target2 imbalances.

How would the ECB would allocate those losses?

Taxpayers, depositors, or bondholders will be bailed-in directly. Alternatively, the ECB will violate the Maastricht treaty and print the money to cover the losses. In that case, the euro will take a hit.

Nothing in Europe is safe!