Market Recap: Markets dropped significantly yesterday as the Chinese Yuan weakened against the U.S. dollar. Although many believe China devalued their currency, they actually stopped propping it up yesterday. That is a major deflationary pulse and it was felt across asset classes. The S&P 500 was down -3.01% on the day.  Oil was down -1.74%. U.S. 10 Year-Treasury note yields dropped 11 basis points, finishing the day at 1.75%. 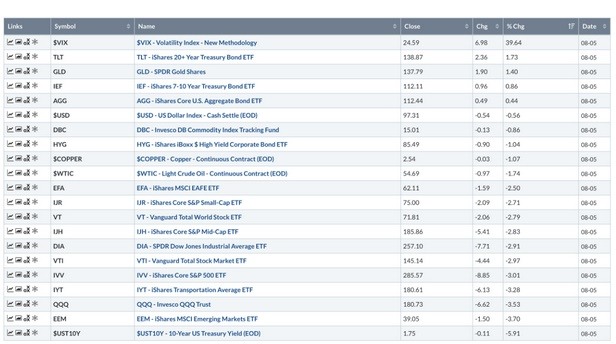 Economic Data: While markets were largely focused on trade and currency wars, the U.S. ISM Non-Manufacturing Index dropped to new lows, declining to 53.70. Despite the noise, growth has been slowing since the fourth quarter of 2018 and that affects markets. 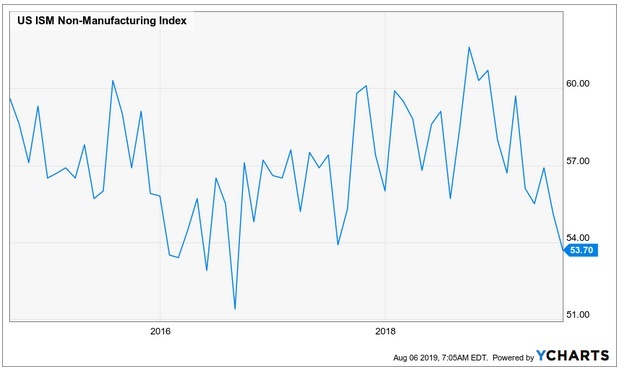 Volatility: The VIX rallied nearly 40% yesterday.  This is after a rally of over 40% last week.  The VIX has broken above the May highs which may imply that the S&P 500 could challenge or break below the lows it set in June. 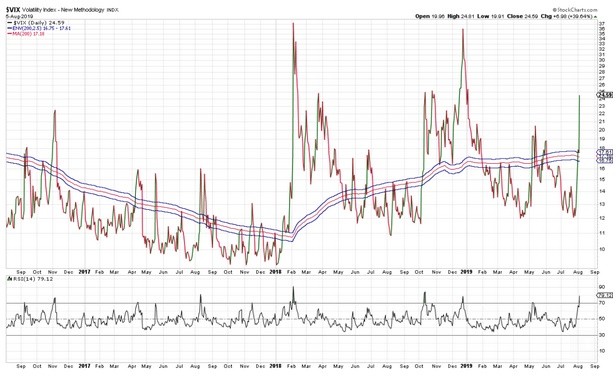 U.S. 10-Year Yields: 10-year yields broke to new lows and have accelerated downward.  Yields are way below their 200-day moving average.  How low will they go?  We think over the course of the next year, a lot lower. 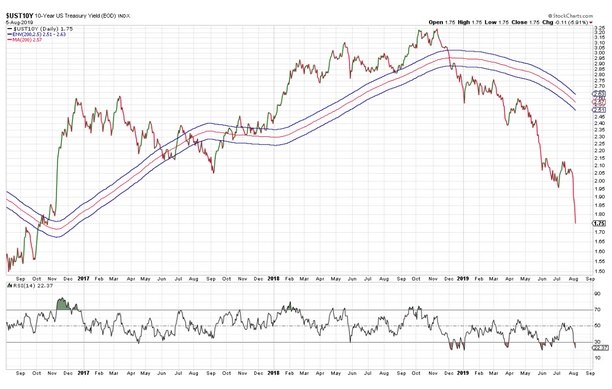 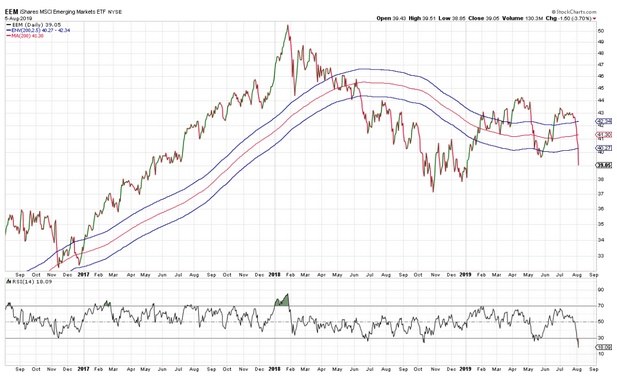 Chart of the Day: The U.S. Dollar rallied to new highs relative to the Chinese Yuan, as China failed to prop up their currency yesterday.  If China were to fail to stabilize their currency, it could drop 30-40% according to hedge fund manager Kyle Bass.  The implications of this are deflationary for the U.S. 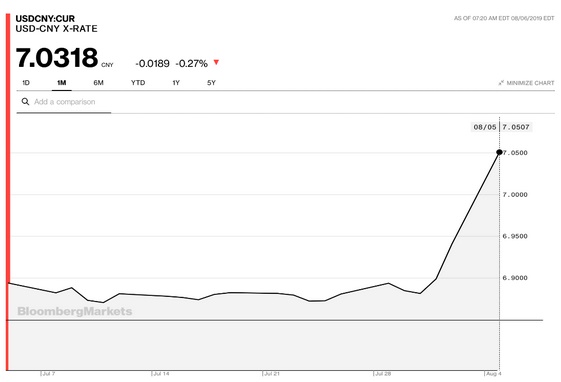 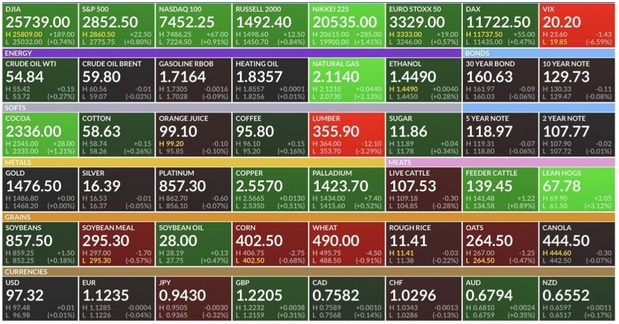 China moved to stabilize the yuan, bringing some relief to markets in the wake of yesterday's rout, which deepened after the Treasury Department labeled Beijing a currency manipulator. China's central bank set the daily currency fixing stronger than expected and announced a sale of yuan-denominated bonds in Hong Kong, while denying the U.S. accusation. Read this QuickTake on why the U.S. officially took the step.

North Korea fired more missiles and renewed its threat to follow a "new road" after the U.S. and South Korea began joint military drills yesterday. The Foreign Ministry said the two countries would pay a "heavy price" if they continued the exercises, which it called a "flagrant violation" of last year's pact between Kim Jong Un and President Trump.

The U.S. further sanctioned Venezuela, freezing assets and curbing immigration to increase pressure on Nicolas Maduro's regime. The steps put the country on the same footing as North Korea and Iran. National Security Adviser John Bolton speaks in Lima today at a conference of nations that see Juan Guaido as the rightful leader.

China urged Hong Kong citizens to stand up to protesters after a general strike that led to a day of traffic chaos, mob violence, tear gas and canceled flights. Beijing reiterated support for city chief Carrie Lam, defended police action and said those who play with fire will perish by it. Check out our live blog of the press event and take a look at the triad gangs linked to the protester attacks.

Bill Ackman sold his stake in United Technologies, abandoning efforts to fight its takeover of Raytheon, a person familiar said. Pershing Square also liquidated its position in payroll processor ADP, the last company where he waged a proxy fight, he told co-investors in a letter. The investment returned about 50% for those involved. He's also built a stake in another unidentified company.