Current position of the market

SPX Long-term trend: The 4540 projection which had been in effect since the March 2020 low has now been reached but appears to have been only an intermediate target. Higher levels should now be reached before an important top is struck.

SPX Intermediate trend: An intermediate correction has ended and given way to another intermediate uptrend. Analysis of the short-term trend is done daily with the help of hourly charts. They are important adjuncts to the analysis of daily and weekly charts which determine longer market trends.

After reaching its 4546 projection, SPX underwent a moderate correction of 267 points that was, nevertheless the largest one in almost a year. It was halted by the bottoming of cycles of intermediate nature which turned prices up from a level a little higher than had been expected. Last week’s market action-- which has already brought SPX to a slightly higher all-time high -- confirmed what had been suggested by the price activity of the previous week: that a new intermediate uptrend had started. The base is large enough to take the index to a minimum of 4790 relatively quickly and perhaps as high as 4950 after some consolidation.

An initial phase projection of 4520 was ignored and the index pushed on to the next minimum target of 4550 where it paused to allow the short-term cycle to bottom. The strong uptrend completely overwhelmed the latter which was due to make its low on ~10/22 (marked on the chart by a small arrow) but it was finally allowed to bottom on time with a 35-point drop from the previous rally high of 4559. Now that the short-term cycle has bottomed, it could extend the uptrend to ~4580-4590 before a reversal takes place. When this occurs, prices should find support in the vicinity of the dotted line shown on the chart. A pullback to that level would also amount to a 50% retracement of the previous uptrend. Whatever the size of the correction, after it is over the advance should resume. 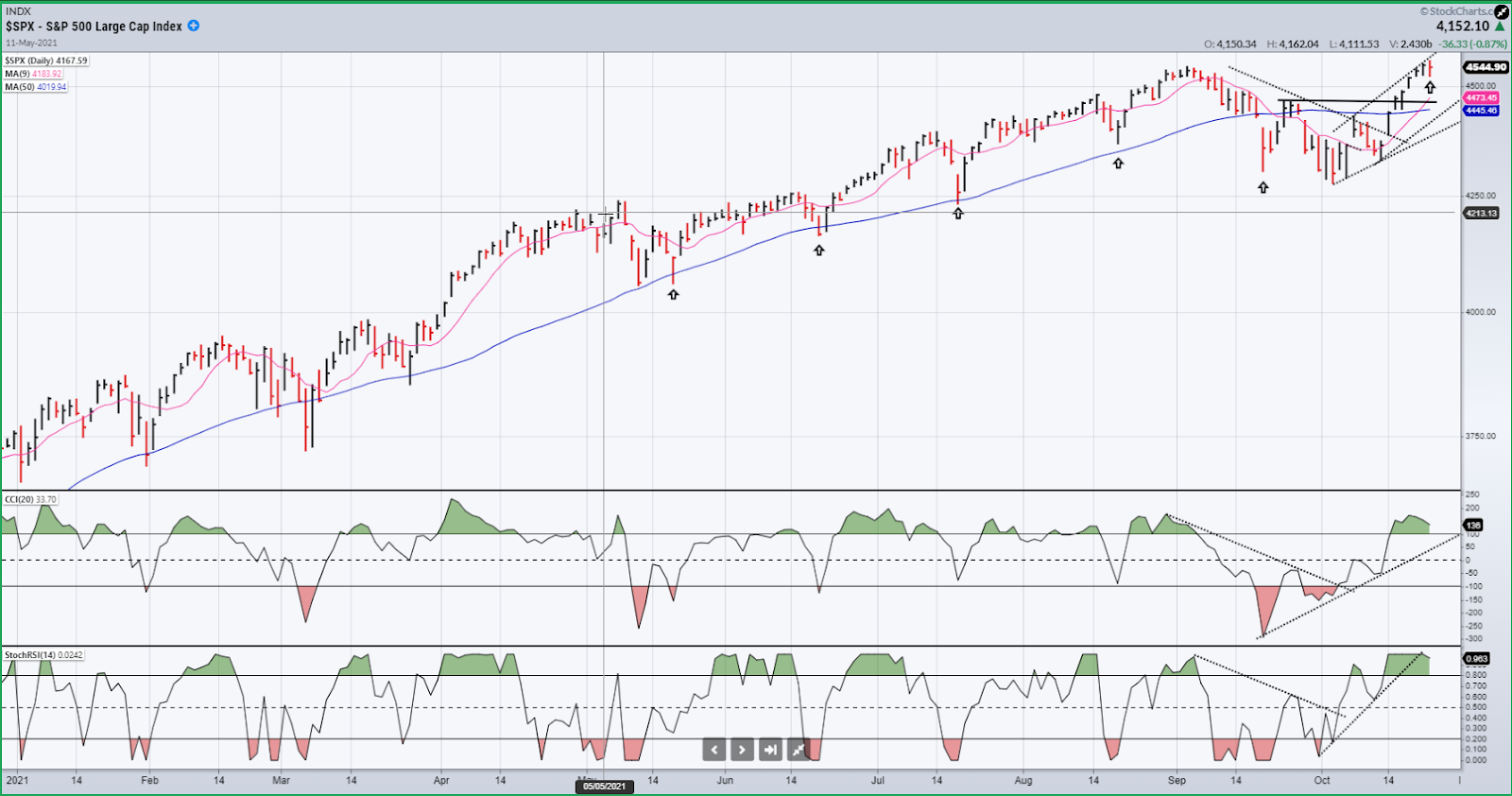 The DOW, which preceded this new advance with what was essentially a five-month consolidation phase, has also already made a slight, new all-time high. Although the larger price pattern varies from that of SPX, the past two months are very similar, and the two indexes should progress in similar fashion from this point on.

The McClellan (breadth) oscillator posted below shows that this indicator actually bottomed ahead of the price index, and it has fully confirmed the new uptrend by making a new high. It will probably be several weeks before it develops a deterioration pattern that will signal the end of this new advance. 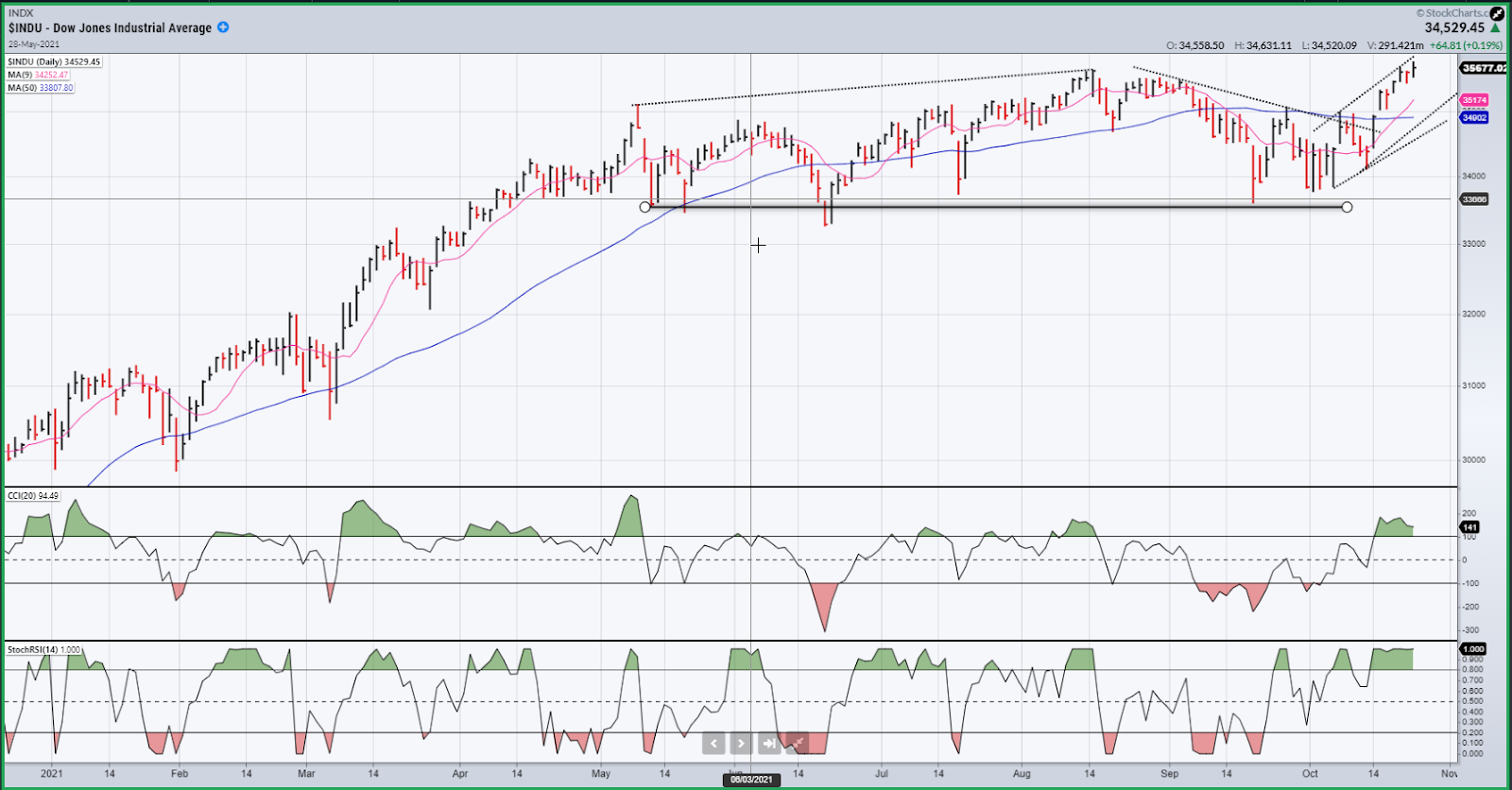 Richard Wyckoff believed that the best way to analyze the market was to combine conventional bar chart analysis with P&F projections. He also suggested that looking at a bar chart could help clarify and confirm a P&F count. The chart below is a good example of this technique. The green line drawn across the 4360 level to the last decline of the previous correction is what gives us a projection to 4580-90 on the P&F chart, making it clear that this is the most likely level that SPX will be trying to reach before correcting since it has already gone past 4520 which was the first potential target. Although the P&F chart pattern is relatively clear this time, there are instances when this process will be very useful to determine the start and end of separate phases. After the coming correction, the base can be extended to include the pattern formed by the decline into 9/28 which will give us a projection to ~4790.

If the short-term cycle did bottom on Friday (arrow) it could provide the additional oomph to take the index the rest of the way to the suggested price target. 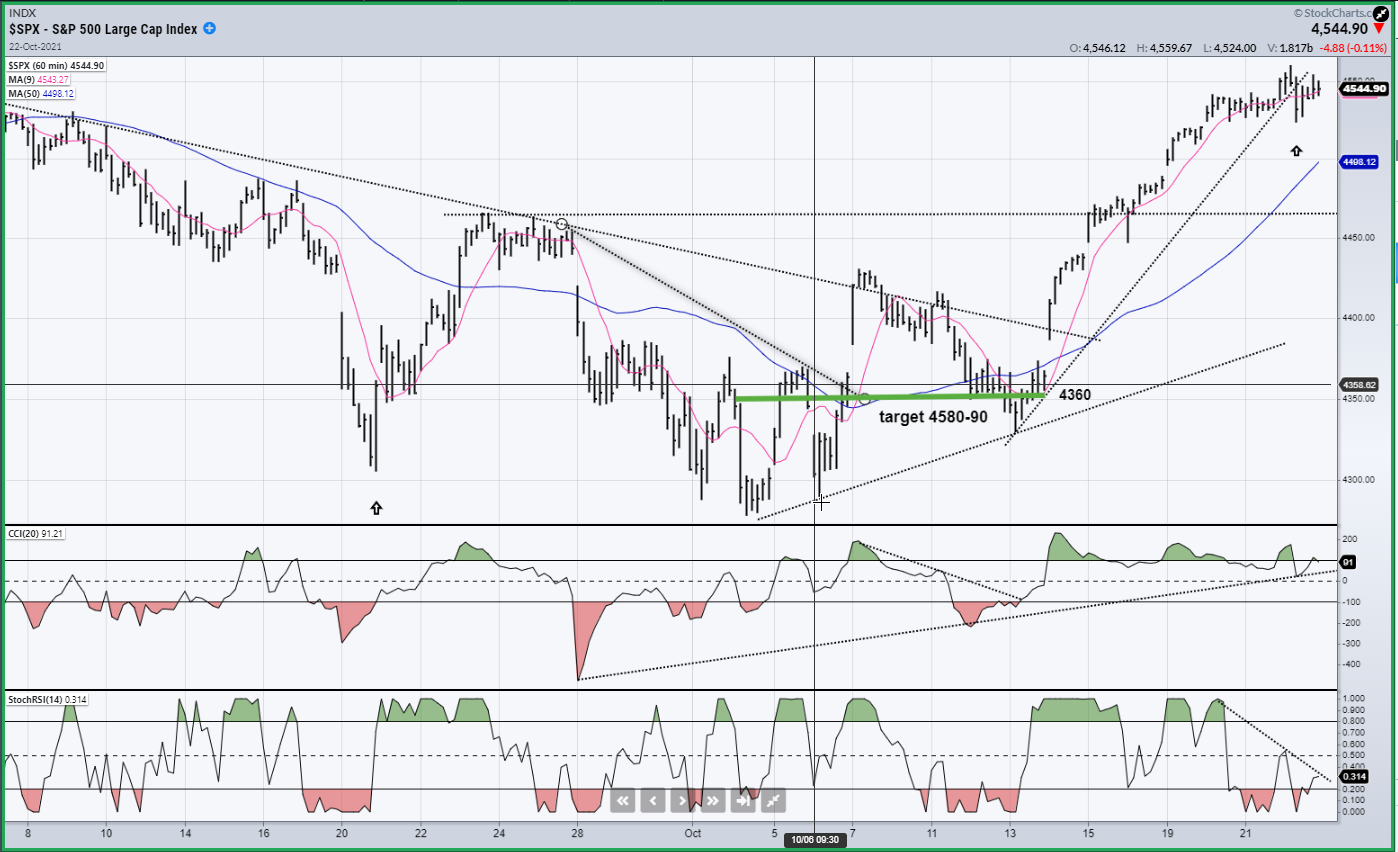 The dollar looks as if it has given up trying to break out of the corrective channel, at least for now. Perhaps it will try again if it can hold its correction above the 50-dma. 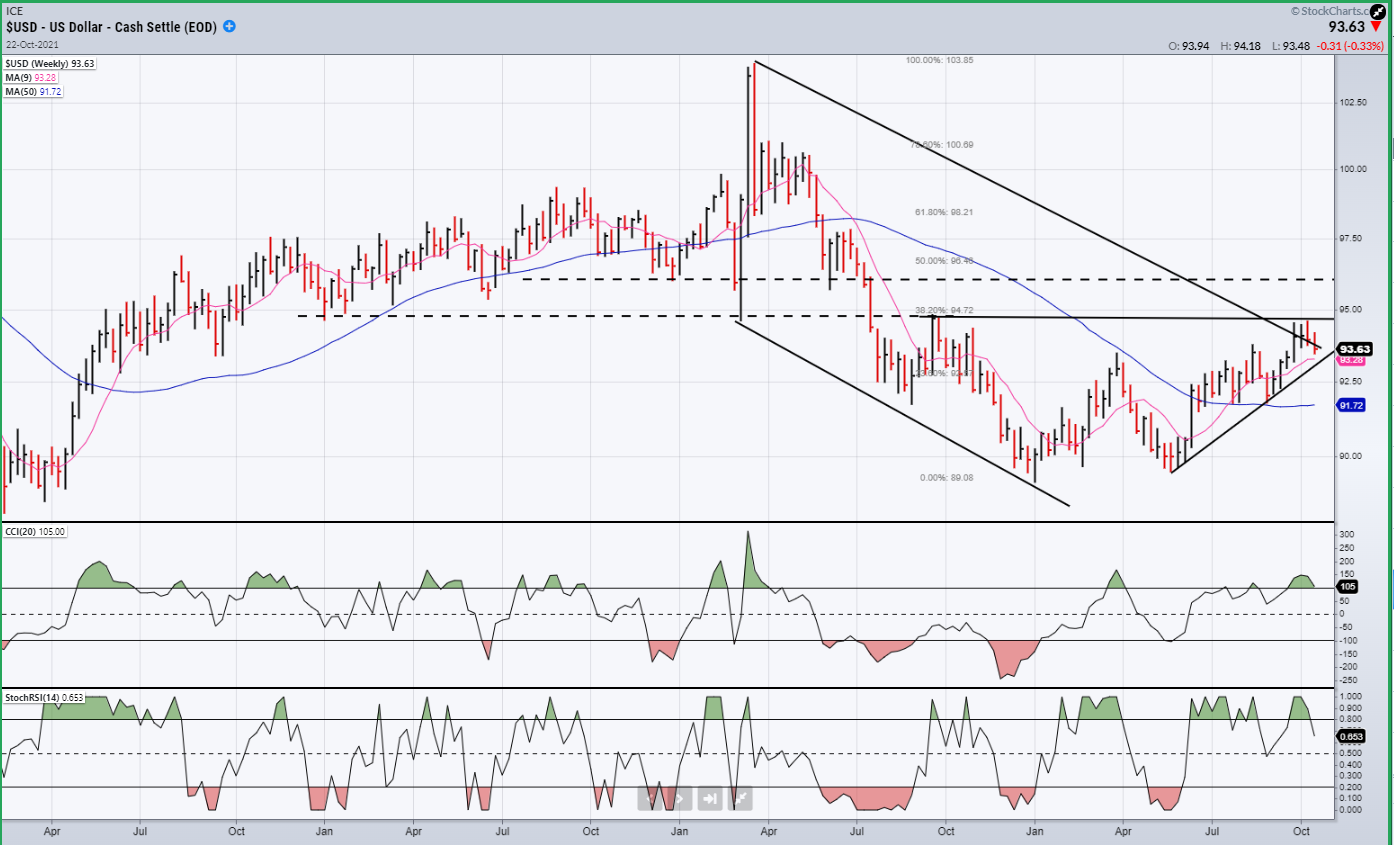 Failure of the dollar to extend its rally has helped GDX to move out of its corrective channel, pushing a little higher again this week. Trying to move above the resistance created by the former short-term top has failed initially -- although the index still closed higher for the day -- but it may try again; perhaps as early as Monday, especially if the dollar shows some weakness. 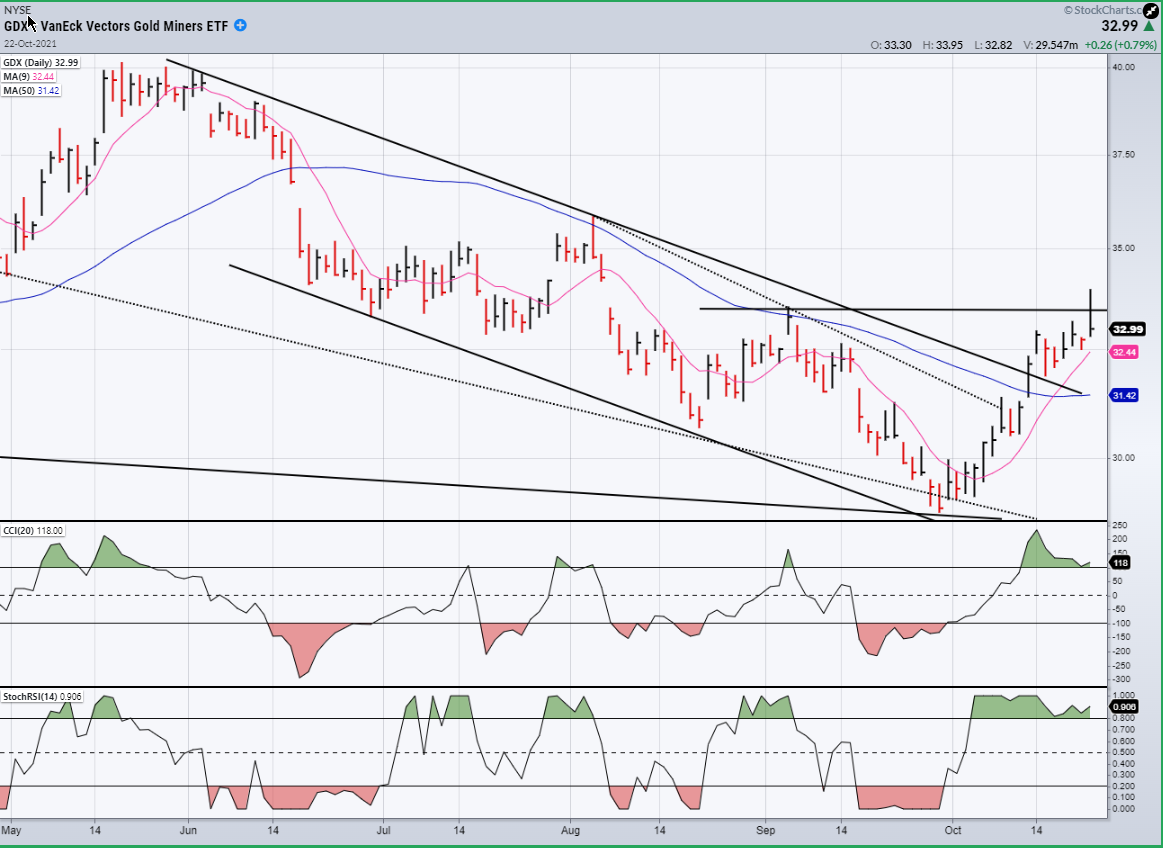 PAAS also found resistance at a former short-term high which could require that it undergo a little consolidation before moving higher. While it is likely to succeed getting past that first resistance barrier, its future progress will obviously be hampered by what lies above. 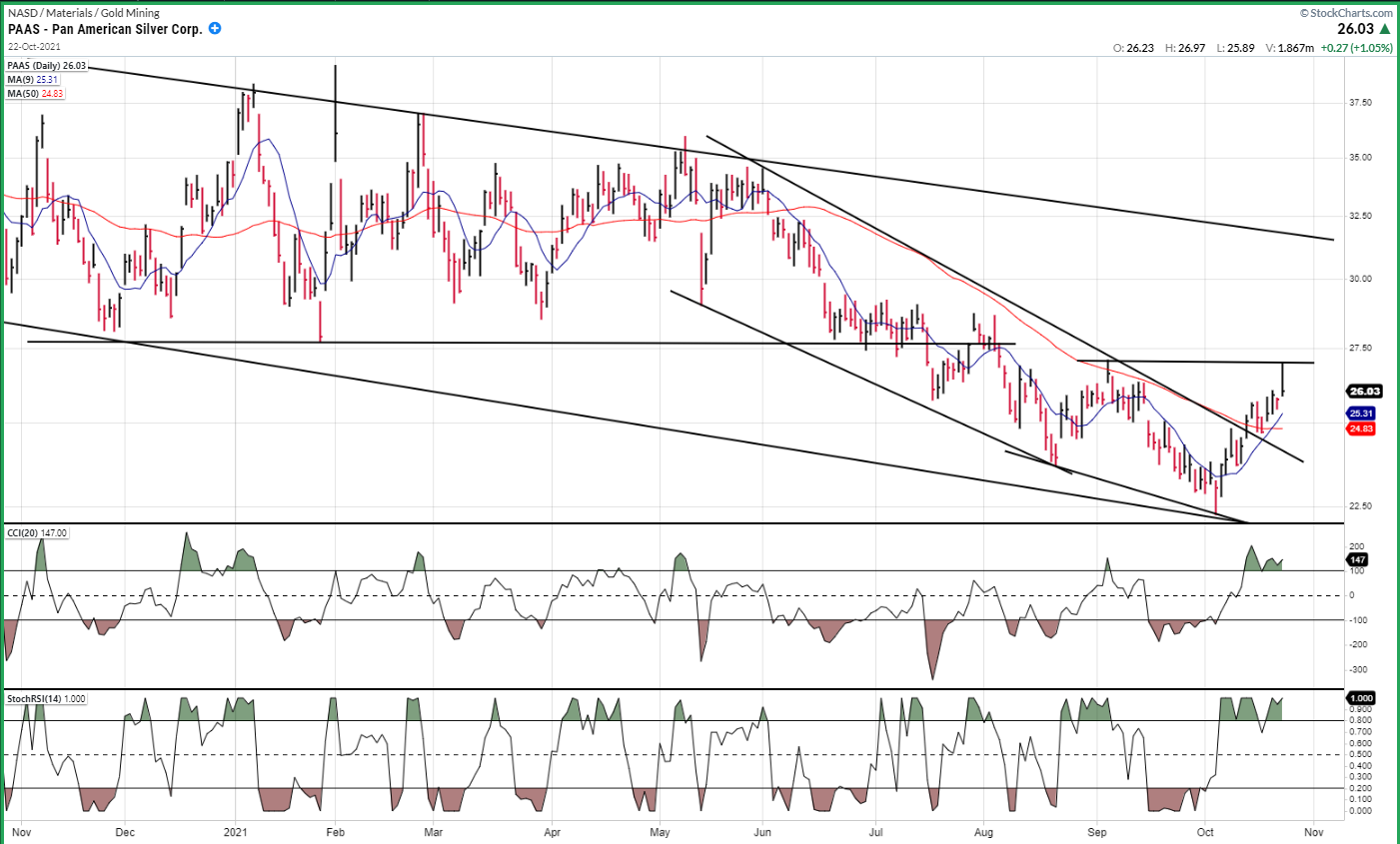 BNO spent the past weekcreating what looks like a short-term top. If it cannot remain above the secondary trend line, it should start to correct. The condition of the indicators and the fact that it filled a short-term projection to 22 makes a price retracement likely. 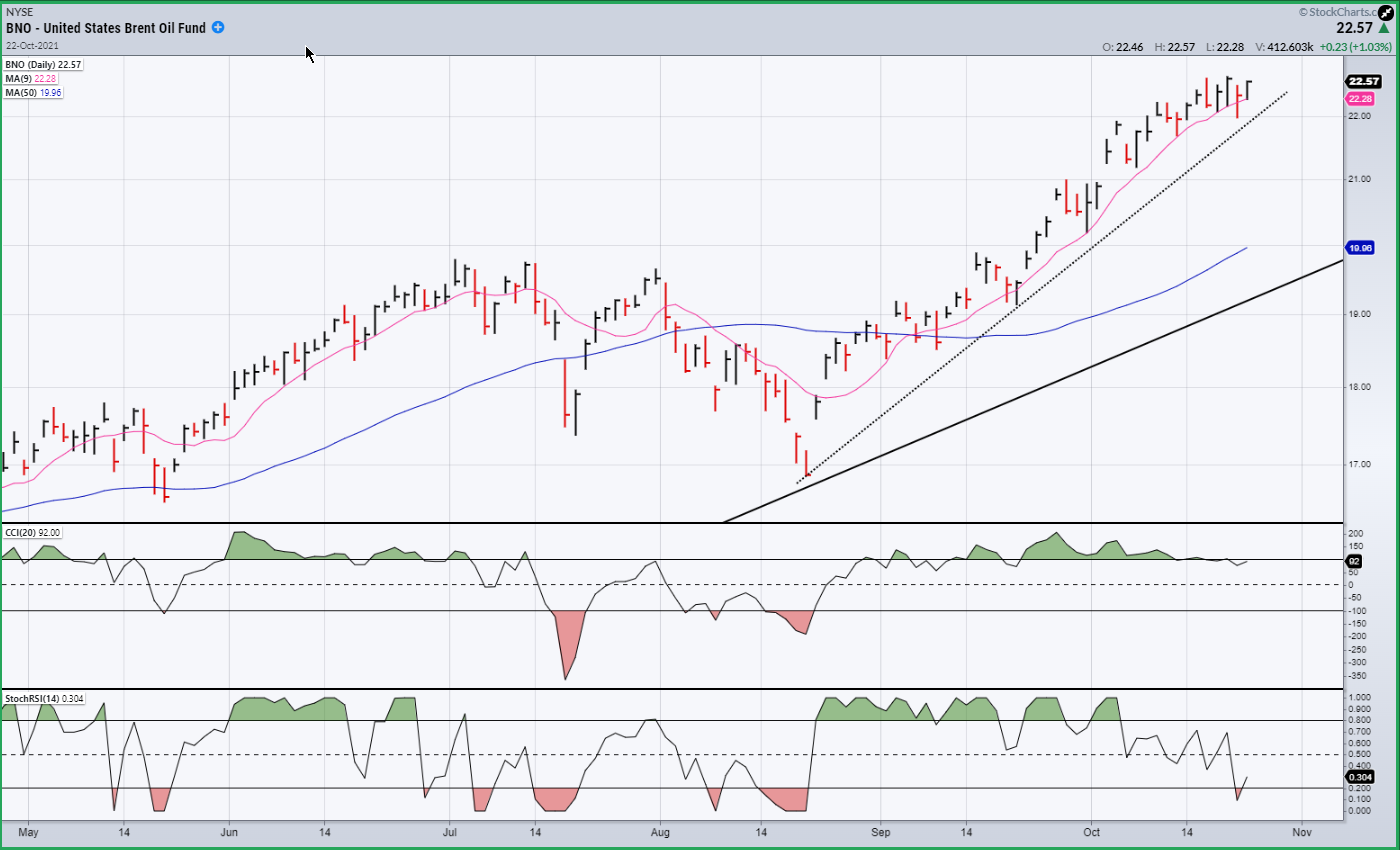 Last week’s price action confirmed that SPX has started another intermediate trend which should take it to a minimum of 4790 before running into significant selling.

EUR/USD is trading below 1.1350, consolidating the biggest daily jump in fortnight. The US dollar pauses its rebound amid cautious optimism. Omicron, US-China woes keep investors on the edge, Rising US inflation expectations underpin the yields. US jobless claims, Omicron updates closely eyed.

Gold prices inched higher on Wednesday and touched a one-week high, albeit struggled to capitalize on the move and faced rejection near the very important 200-day SMA. Investors seemed reluctant to place aggressive bets ahead of the key US consumer inflation data.

MATIC price appears to be ready for a major upswing toward $3.84 as Polygon presented a bullish chart pattern on the daily chart. The governing technical pattern suggests that the layer-2 token is preparing for a 62% climb.