Heard any good news about global growth, earnings forecasts, Trump’s impeachment, the China trade impasse, or American relations with Iran? No need when the Fed is pumping money into the financial markets at two times the rate of peak quantitative easing.

Then that suddenly stopped in mid-September, when overnight repo rates shot up to 10% from 1.5-1.6%. The large banks that normally fund overnight loans for banks, and leveraged investors who need to meet margin or reserve balances, just simply and immediately stopped lending.

Why did this happen? The Fed thought it could taper its balance sheet and QE stimulus… and the financial system is telling them, “No way! We need this liquidity to survive as we are still largely insolvent.”

This just shows that central banks didn’t fix the 2008-09 financial crisis, they just covered over it and kicked the can down the road. Now the Fed is caught funding this repo market and they have had to inject $505 billion now since mid-September, with the latest injection a whopping $83 billion in early January. Peak QE was at $60 billion a month. This is averaging $127 billion, or more than double that! 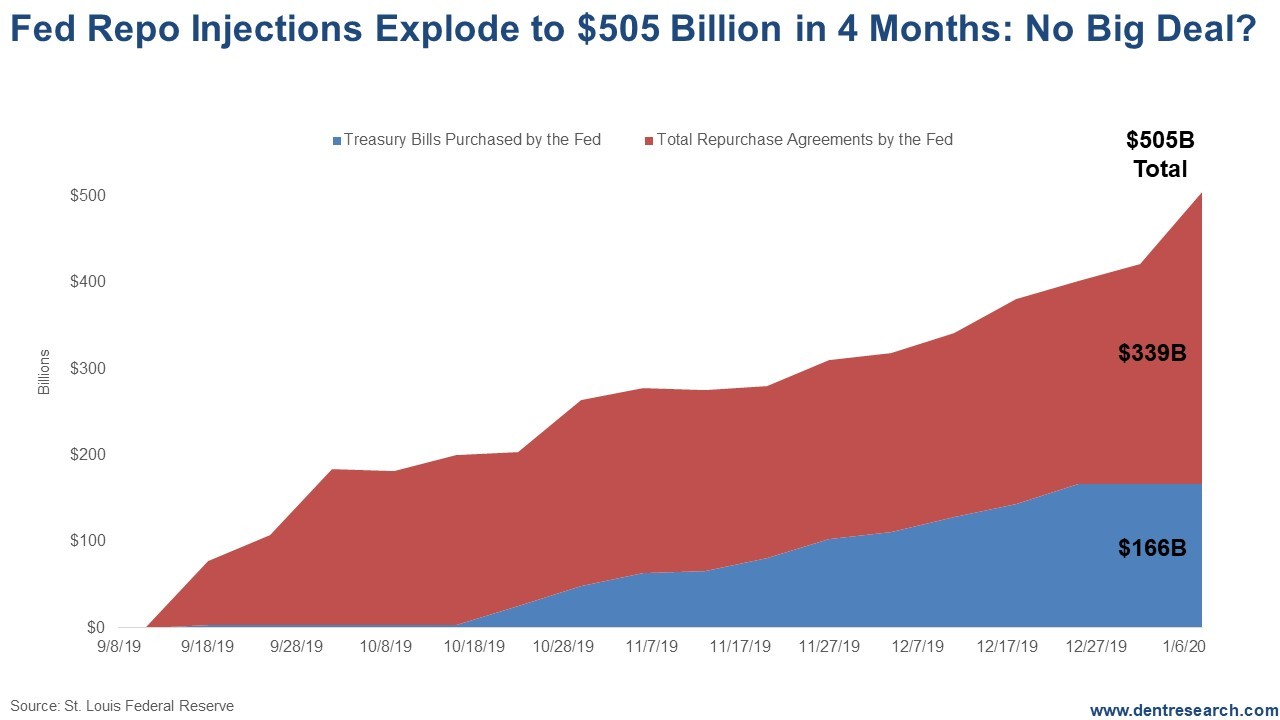 Note that $339 billion of this is directly funding repo agreements that the banks were no longer funding. But in addition to that, they added $166 billion in T-bill purchases through mid-December – good old-fashioned QE. Their balance sheet peaked in late 2014 at $4.52T (trillion) and it fell to $1.76T – a drop of $754B (billion), or 17% – in September.

But the reserves at banks held at the Fed for liquidity dripped from $2.72T to 1.26T, $1.46T or 54% – much more than the balance sheet. There was that point where the larger banks simply were not comfortable using their funds for repos creating too low reserves… and what happens if we get another Long Term Capital Management hedge fund that blows up overnight? 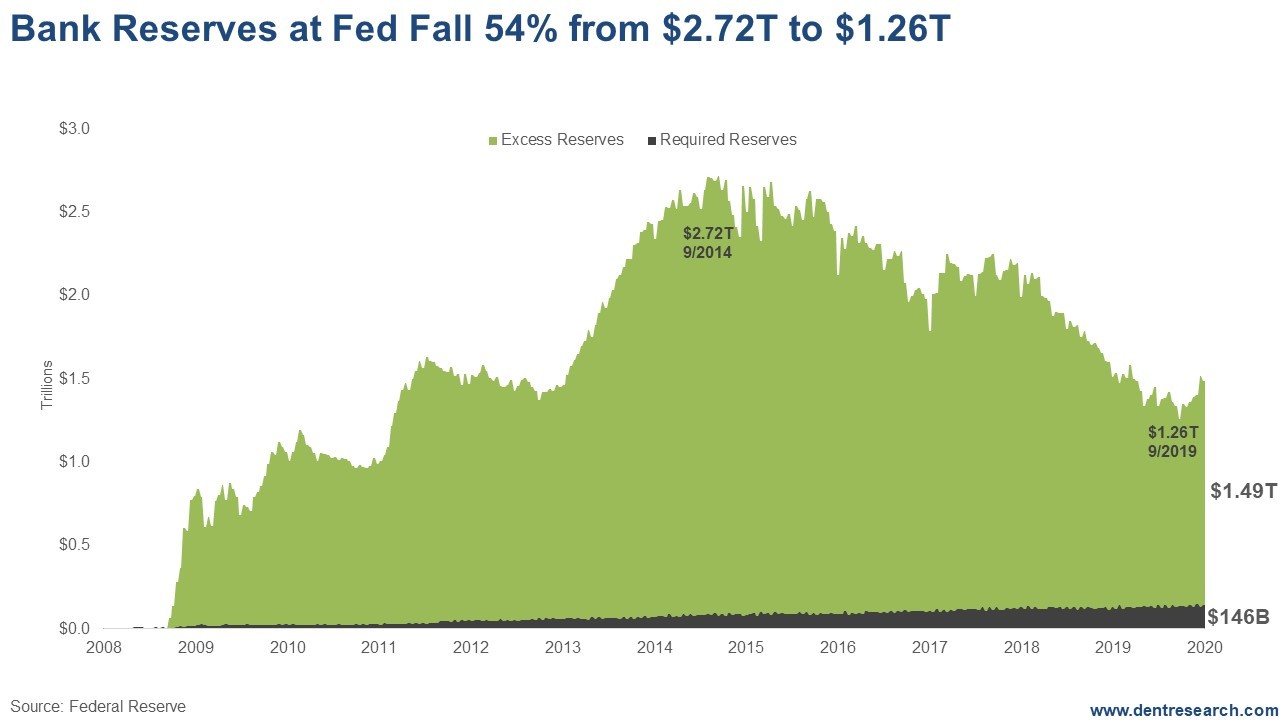 But the real point here: The system is telling the Fed that it can’t handle its tapering, and the Fed is goosing its balance sheet rapidly. Just another $300 billion or so will take it back to its peak in late 2014 – late 2017, before it started to taper. At this rate, that would happen by the end of March.

Central banks keep erroneously assuming that if they stimulate long enough, the economy will grow strongly again on its own. That only happens if you allow a deleveraging of debt, financial bubbles and unproductive banks and companies…

When do the alarms go off here? When we’re at new highs on the balance sheet? When cumulative repos and QE hit $1 trillion?

I’ve always said that you can’t keep pumping up a dead economy and financial system without creating bubbles that burst of their own extremes and losing control over a repo crisis like this.

The Fed injected $150 billion into January 5, 2000, to offset Y2K problems. The Nasdaq exploded in that very time and then crashed by 41% three months after they finally backed off – and that was just the beginning of a 78% crash.

This blow-off rally since September is directly related to this and nothing else. We could see this continue into the first few months of 2020 and then peak for good…

I have a few scenarios in this political-laden year. But look out if this repo crisis and stock market continues to run full speed, as it is currently. A 40%+ crash could be coming sooner rather than later.

Gold price extends its recent retracement slide from the vicinity of the $1,950 level, or a nine-month high touched last week and remains under some selling pressure on Tuesday.