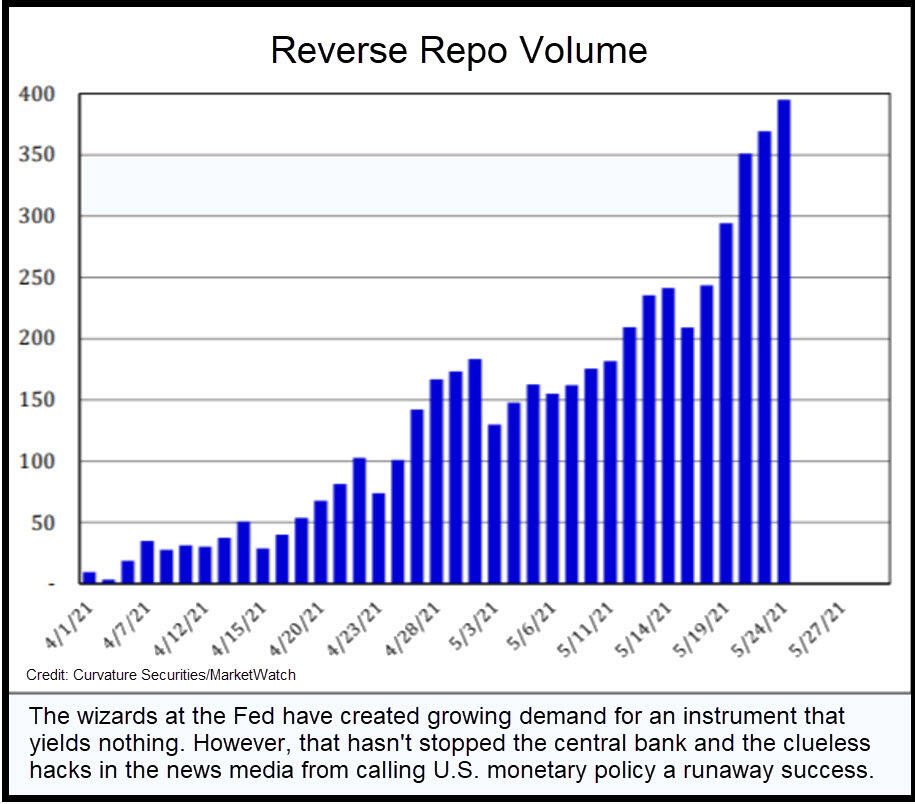 [The following was written by a San Francisco friend from the hedge fund world, Shawn Brown. It buttresses the suspicion that while there seems to be plenty of credit money available for speculation, the collateral behind it is getting thinner and shakier by the week.  The Fed, with $8 trillion of Treasury paper and other top-shelf collateral on its balance sheet, has monopolized the supply, leaving lending banks to scramble for collateral for their own that hasn't already been hocked twentyfold. As a result, central bank interventions are becoming more frequent, more complex and bigger, to the point where even the experts are having trouble determining whether the banking system is headed for a crack-up far larger than the one that took down Archegos a few months ago.  RA]

Why is the Reverse Repo Facility breaking records daily and the Federal Reserve returning hundreds of billions in foreign currency swaps weekly?  These two concerning but mostly overlooked items seem to coincide with Bill Hwang’s disaster at Archegos Hedge Fund. We still have very little clarity on exactly what happened with conflicting reports on the actual fallout. Whether the fund was naked short derivatives or concentrated long media companies, these positions resulted in tens of billions in losses to a number of Too Big To Fail banks. Whatever occurred, shock waves are still rumbling throughout the intertwined global financial system.

Who Are Those Guys?

The current explosion of usage from the Fed’s Reverse Repo facility began on March 26 -- the same day Archegos ceased operations -- with 12 Participating Counterparties exchanging $11.45 billion for Treasury securities. We aren’t allowed to know who they were because it might cause a run on the institutions, or so the story goes.  Fast forward to this past Friday morning and 61 Counterparties wanted to swap their idle cash for nearly three-quarters of a trillion dollars, or $747 billion, of T-Bills, -Notes and -Bonds.  Is this is why we are hearing the Temporary Open Market Operation might become permanent?

Another curious happening at the Fed also began in earnest around the same time.  The FRB H.4.1 release for the week of April 1 noted Central Bank Liquidity Swaps returned over $325 Billion to Foreign Central Banks, which continues through this week’s release of another $350B.  Again, no information concerning which foreign central banks are receiving these mountains of fiat or why the FRB is returning the currency.  Prior to the Archegos collapse, H.4.1 releases have required infrequent and minuscule usage of foreign liquidity swaps.

A Reuters dispatch dated April 2 appears to agree with our sentiment, "The meltdown of Archegos Capital Management LP, a New York investment fund run by former Tiger Asia manager Bill Hwang, has sent shock waves across Wall Street and drawn regulatory scrutiny in three continents."  Is this type of risk-taking isolated, or are more blow-ups being concealed through Fed data releases?  As Former Fed Chairman Alan Greenspan famously stated, "I know you think you understand what you thought I said, but I'm not sure you realize that what you heard is not what I meant."

We live in a time when everyone seems to forget what happened yesterday, let alone "way back" in late March of 2021. Perhaps it’s time to stop providing custody and execution services to guys like Hwang, who was fined $44 million in 2012 for insider trading?  Who and why was this convicted scam artist allowed market access to trade through his renamed "Family Office"? Maybe the Prime Brokers who traded with Archegos were confident they’re also now TBTF. It appears the Fed will backstop everything from MBS to Corporate Bonds, why not total return swaps, too?  Paging the Ghost of Bobby Thomson to a white courtesy phone.
View Post on the Rick's Picks Website