S&P 500 going nowhere, repelling selling pressure concentrated to value as tech mostly defended the daily ground – that‘s a fair summary of the stock market going into today‘s CPI. VIX rising and the put/call ratio as complacent as can be, are signs of quite some moves ahead.

I won‘t go into the transitory vs. getting permanently elevated inflation arguments too much today – see them covered in detail namely on Jun 08, Jun 02, May 27, May 17, and May 12.

Over the coming month – most likely starting with the CPI readings for September – the low yearly base effect and reopening rush would be sufficiently history. But the strained and disrupted supply chains beyond microchips, high-cost base as evidenced by the CRB index lumping many commodities together, difficulties hiring, and not exactly labor market-friendly policies a la minimum wages, would deliver a one-two punch to the transitory concepts – because transitory as in temporary, brings up to my mind J. M. Keynes „In the long run, we‘re all dead“ quote.

As I‘ve stated on Twitter, commodities with silver, then gold are more in danger than stocks for today - but even these would eventually recover. The Fed isn‘t in a position to do more than token steps to satisfy public consumption, so keep in mind the big picture regarding taper, rate raising, or even the (market declared so historically) balance sheet contraction success on a lasting basis (we‘re not in the post-WWII era when the U.S. could grow its way out of debt as in the „City on the Hill“ inspirational speech decades later.

(…) The dollar doesn‘t look to be turning around – Thursday‘s upswing has been erased, but look for the greenback to reflexively rise when confronted with „taper now“ prospects. But is the Fed ready to welcome higher rates, and work towards them? I look for plenty of assurances that the support would be very gradually withdrawn so as not to affect the markets…Toothless compromises for public consumption fit into the picture greatly too...

Look, the $6T boondoggle is dead on arrival, and won‘t turn out nearly so in the end and fast enough, which would take a little pressure off the still hot inflation trades. Commodities, followed by silver, and finally gold would feel (by the extent of reaction) the short-term pinch, but remember that inflation fires on two engines - and the job market one is arriving.

Commodities exerting cost-push influence, and job market pressures, would be a one-two punch to the transitory inflation arguments. Deflationary shock simply isn‘t likely at the moment – the market will more probably find out the Fed isn‘t as serious about taper as it pretends to be – the ostrich pose. Or we might be cushioned into a higher inflation environment actually (thank you, Janet), being told it‘s for our own good.

Gold is confirming yesterday's mentioned point of being more vulnerable than silver to a scared dump, and the miner's weakness still shows it won‘t be smooth sailing for the yellow metal either. And it isn‘t. Copper is worrying down, even more, hinting that today‘s session will be far from a calm one in the bond arena. Remember though the big picture once again:

(…) the red metal‘s bullish bias is clearly there, both in the short run and medium-term as I had been stating months ago that you can‘t (attempt to) build a green economy without copper, silver, or nickel, among many else. It‘s massive and we‘re in a commodities superbull already – and the lumber arguments (not confirmed by timber weakness as I remarked) can be easily refuted by the $CRB index performance.

Crude oil would likely be among the more hesitant movers today, still consolidating. 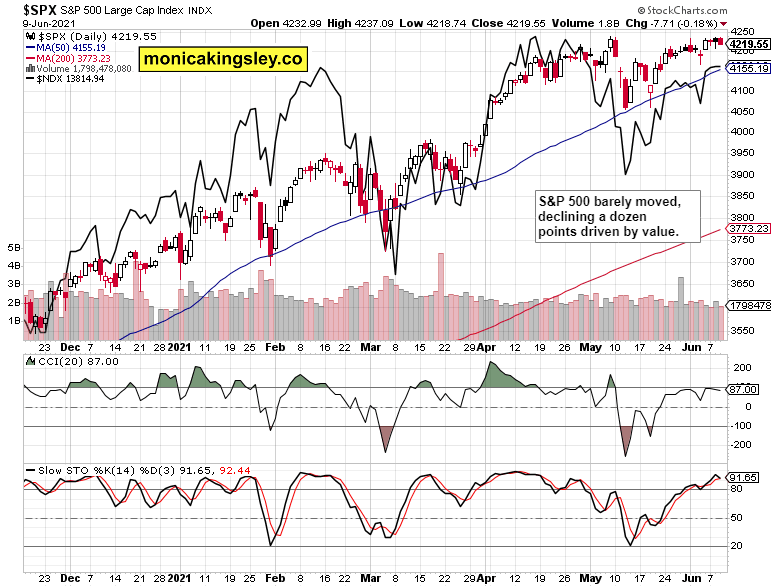 S&P 500 again didn‘t move much, and neither did Nasdaq. Both calm and nervousness before today‘s CPI, likely to be resolved higher.

High yield corporate bonds‘ yet another black candle looks ominously – but only for the short term. Quality debt instruments rising is a sign of rush to safety and uncertainty ahead of CPI. As said yesterday too, it‘s though still a bullish sign that HYG rose.

Technology including $NYFANG again had a relatively good day, and the unease shown by its black candle is to be seen foremost in value. 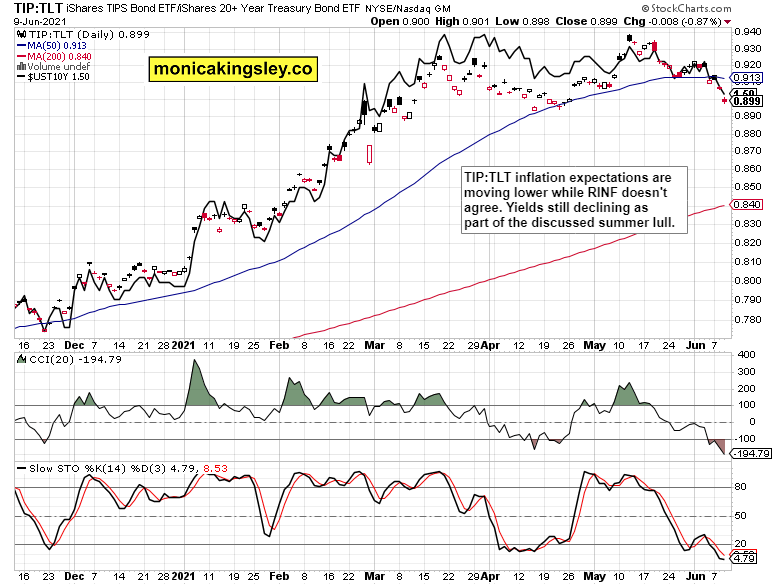 They‘re moving slower, but the TIP: TLT ratio isn‘t to be trusted even as the lull in yields remains on through the summer.

The above is a picture of momentary stress to be reversed like a springboard, exactly in line with either of these two tweets before that happened: first on inflation, second on transitory vs. permanently elevated. 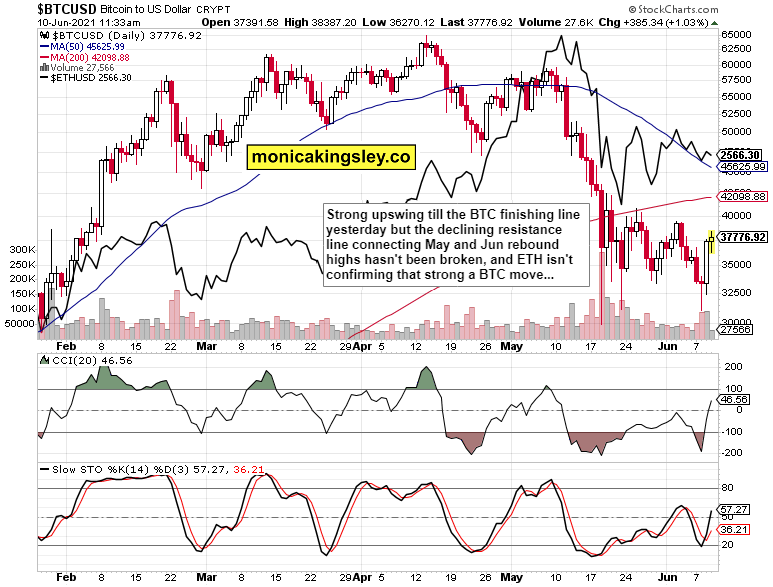 The crypto bulls aren‘t out of the woods yet, but it‘s not unreasonable to expect the biting inflation to improve their stance.

S&P 500 remains well-positioned for further gains, and it paid off to wait through the premarket tremors in Nasdaq too.

Gold and silver are well-positioned to withstand the pressures, and the miners to invalidate their recent weakness.

Crude oil would likely hitch a ride in a tight range on the bullish side, without sprinting.

Bitcoin and Ethereum look to be entering a wait-and-see session today – the bulls have much work ahead, not only in bringing Ethereum out of its sideways consolidation.