The roller coaster ride for the G10 FX market continues today with the unexpected announcement from the Swiss National Bank that it was disbanding its 3.5-year 1.20 floor in EURCHF. At its last meeting on 11th December the central bank kept its 1.20 peg and it seemed committed to using the currency as a policy tool.

The immediate aftermath has been a more than 20% decline in EURCHF, this pair has fallen through parity for the first time, and the low so far this morning has been 0.8721. Right now this pair is falling like a stone as 3.5 years of the market trying to go against the SNB finally comes to fruition.

If the SNB though that it could make this adjustment in an orderly manner, then it has failed miserably. The EURCHF market has basically shut down so far this morning, while it waits for the dust to settle.

So why did the SNB do it?

Where will Swissie go next?

After a huge surge higher on the announcement there are signs that the SNB may have had to come into the market this morning to stabilise the currency. EURCHF fell to a low of 0.8517 and is now trading back above parity around the 1.04-1.05 mark. We think there are two main risks going forward:

1, the ECB does not embark on a large QE programme next week, which triggers a dramatic reversal in EURCHF.

2, After such a sharp move higher the market may decide to sell the Swissie at this level, after all, the SNB has implemented negative interest rates, which should, in theory, flood the market with francs, causing CHF to weaken in the long term.

3, Right now the market is digesting the announcement from the SNB, and waiting for liquidity to come back on line. There remains intervention risk, so if you are planning on trading the Swissie at some stage in the near term expect some serious volatility. 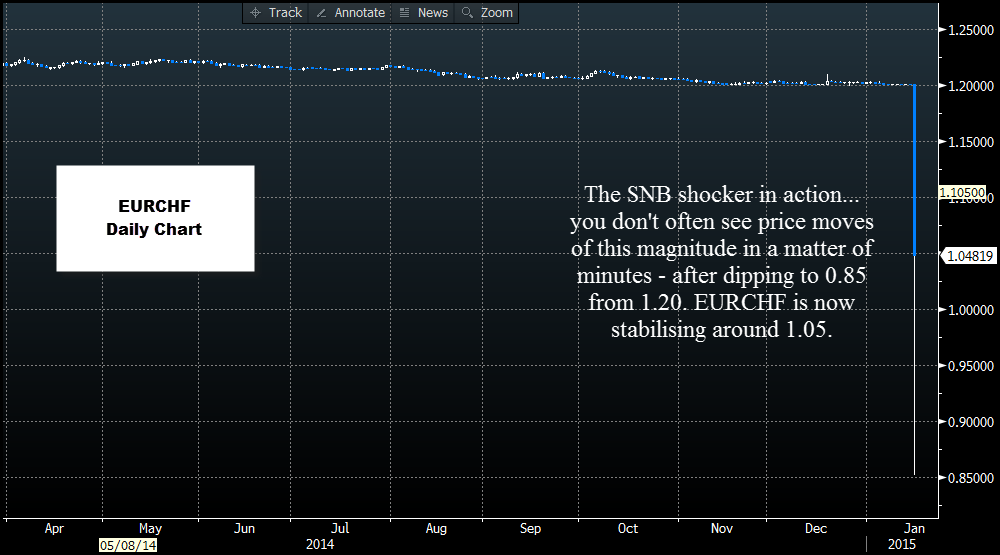